Magic: The Gathering, a Wizards of the Coast product, a Hasbro Partner, is doing things for Pride this month. As they do. As they have done. And it’s hard to grapple with Corporate Pride and this game as a material space doing deliberate actions to include more people.

I think it’s important to remember there are three basic layers of ‘Pride’ at work here. And every detail about Wizards of the Coast as it relates to pride, as a deliberately inscrutable internally silent business, is going to have to be filtered through the fact that this is still the company that treated Orion Black Like This.

First things first, there are a lot of employees at Wizards of the Coast. They, are, at least the vocal ones I’ve engaged with, people who want to make their workplace and their lives better and want to be inclusive. These people include people that as it were, show up at Pride, and I don’t just mean ‘because it’s a nice event.’ I mean that there are queer and nonwhite people who work at Wizards of the Coast – it’s just that they’re not necessarily the people who make structural decisions. These people, I have no doubt about their sincerity and inclusion in Pride events, or their want to show up. If these perfectly nice people were part of an organisation that said ‘hey, we’re going to show up at Pride,’ for them to not show up would seem odd.

The next layer above them there is the character of Wizards of the Coast; a business, an entity, and a thing we interface and communicate with. We – not they – have been doing a lot of work to make sure that Magic, as a space, is inclusive and doesn’t encourage dickheads, but you gotta remember we’re doing that because there are dickheads. Abandoning the fun game you like because of the dickheads is ceding good things to dickheads. What I’d rather, and what I will do as much as I can, is to shove the people who want this space for themselves, where they can ‘just be guys’ or ‘just be asking questions’ about queer folks out. And that space is the place where branding and iconography matters.

I once made a post that showed the ways that all the colours, and their combinations, and their organisations, can be explicitly justified as pro-Trans, within their existing characterisation, because transphobia is not a thing the game ‘needs’ to represent. It is not ‘a faction’ to oppose. Eventually some of those words wound up on Autumn Burchett’s lands, hand-written across $80 basic lands with the proud line NO TERFS ON GRUUL TURF and… that was wild. Now, when some artist says TERF nonsense, I see strangers on Twitter, who have never met me and never seen my writing chanting this.

When Eternal Witness got a new printing in Time Spiral Remastered that replaced the Terese Nielson art, I saw people celebrating with that rallying cry.

So there’s a meaningful thing in bringing our Pride into their spaces. Forcing Magic to accept us because fuck you, that’s a thing good people do. That’s not nothing. 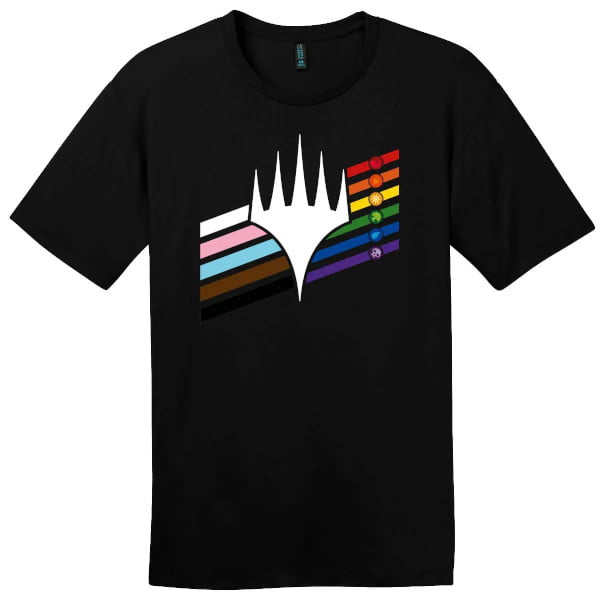 But they still are that company. Because while Magic is a space and a communal interest, and a product, and a brand, it’s also the outcropping of a company. It’s still that space that treated Orion badly, not because any of the people who dealt with Orion were lying, or had disingenuous intention, but because the people they handed that work to handed that work to other people, who handed it on and on and up and up until it hit someone who didn’t see the person involved, didn’t have investment in those values, someone who could treat Orion’s input as being numbers on a page and then just make the decision to ignore them.

It doesn’t even have to be that many steps. That’s how corporations work. The entire point of a corporation is turning the movements and actions of individual workers into systems that create an sort of heartless general intelligence that can turn inputted components of human lifespan into money. And part of how they do that is by making sure we see them, the company, as the same thing as Magic, the communal space and play experience. It’s wanting us to regard lovable Unky Maro, who is, by all I can tell, a pretty good dude as something that doesn’t exist without them, the enormous logistical machine that isn’t here to make Magic, isn’t here to make a system that makes Magic, it’s a thing that makes those memories and happy experiences as an accidental byproduct of their primary goal of making money.

In the end, I don’t think it’s bad to have corporations spending their money on Pride events, to show that they belong and care about being seen as pro-Pride. But we want them to spend it, not to ask us to spend it. They need to spend the money to be allowed to create wallpaper for our spaces, and they sure as shit don’t get to act like they’re in charge.

The Wizards pride shirts are pretty cool. You should buy a pride shirt from someone else.