We’re catching up to contemporary articles I’ve done – I wrote about the cards of Tarkir and Zendikar as they cycled out of Standard. Still, with a few years since, has anything changed? 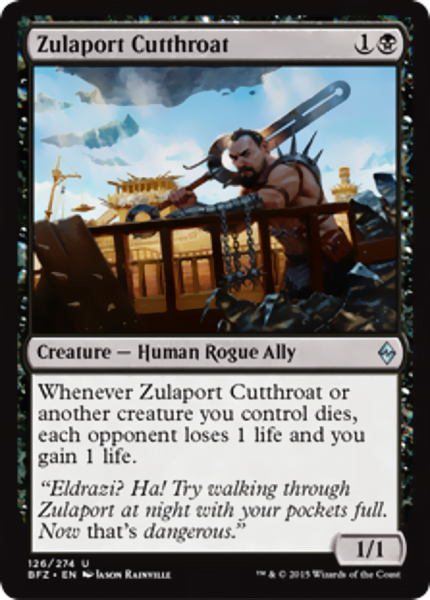 Like I thought about it, I wanted to consider that maybe I’d found some hidden gem, or fallen in love anew with some other oddball card from the set, but the fact is, no, the Zulaport Cutthroat is, and will always be, the pet card of this set. It’s a mechanic I love, and Zulaport Cutthroat is the least annoying of that effect – it doesn’t target, it doesn’t cost too much, and it does its job constantly. I considered maybe exalting Planar Outburst (which is still pretty nice) and Smothering Abomination (who I keep forgetting flies), but no.

No, I play too many Aristocrat decks to play around like that. Zulaport Cutthroat is good as a singleton in a commander deck and backbreaking in a 60 card modern deck built to use them.

Like, I looked at the cards in Gatewatch, and the startling thing to me is how many good-looking cards, cards I thought I’d like, I never bothered to so much as try out – not even the awesome Crush of Tentacles, the kind of control card I love, but apparently not enough to bother going to get. I like Tarzi, based on art and flavour text, but her card? Never played with it. Eldrazi Displacer? Not once. Bearer of Silence? I have four, never bothered to play with them.

What’s more it doesn’t feel like it should be? There are a bunch of cards in here that look like they can do some really fun things. Maybe a whole ramp deck around the Wildborn or a Sunforger deck around… around that one ogre.

Still, there is a card I definitely have played with and am happy to do so: 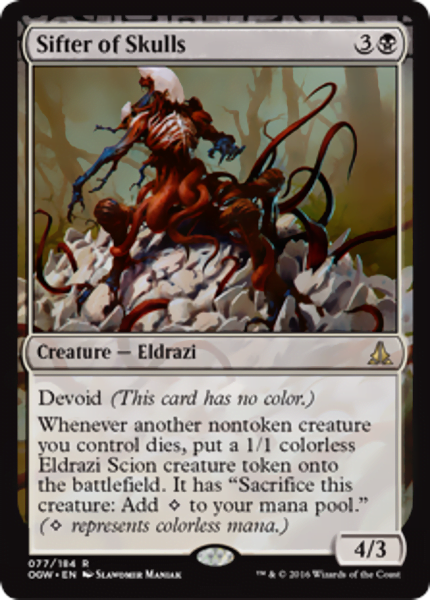 Sifter of Skulls is basically a slightly worse Zulaport Cutthroat. Of course, they work together in conjunction fine, but the typical Cutthroat deck doesn’t have the space for a 4 mana creature without evasion.

This set was just such a wet fart.