I guess… this is the end?

The most recent set to cycle out, the most recent set I can think of as having ‘gone’ from Standard. A set I played a lot, with my fistful of change, a set I watched streamers drafting. A set that I really did like.

I might go back and look at Odyssey block again, because, I mean surely I should? But I’m going to enjoy digging into Amonkhet in the coming weeks, to play with it out of standard, to see what casual modern feels like in the MTGO playrooms.

Amonkhet is recent enough that my time playing it is very fresh, and that means there’s a lot of cards I played with in a way that warm my heart. While I wouldn’t point to the set for remarkable staple cards, it does yet have some of my favourite build-arounds. Glyph Keeper, who is one of my favourite Sphinxes, because it is literally difficult to answer, works alongside Standstill beautifully. Bounty of the Luxa was an engine seeking a deck and in casual play it’s so much fun to have this sort of boom-bust up-down play, where you get to drop 8 mana and 9 mana spells every other turn, and defend yourself in the remaining time. The cycling deck here, with Faith of the Devoted or Drake Haven as win conditions was kinda neat, though a far cry from Slide and GB Threshold Cycling with Invigorating Boon (don’t judge me). Kefnet the Mindful is a little blue dress of a commander, too, he just goes in any blue deck and is basically never bad. Channeler Initiate is a really good Birds of Paradise analogue, so it almost made the cut. And with my love of do-nothing enchantments of course Anointed Procession got a look-in. Shefet Monitor, aka Krosan Tusker 2.0 tends to peek into a lot of commander lists I make, too.

But there is an Amonkhet card I have played a lot, which I put in other formats, which I don’t just love, I also use. 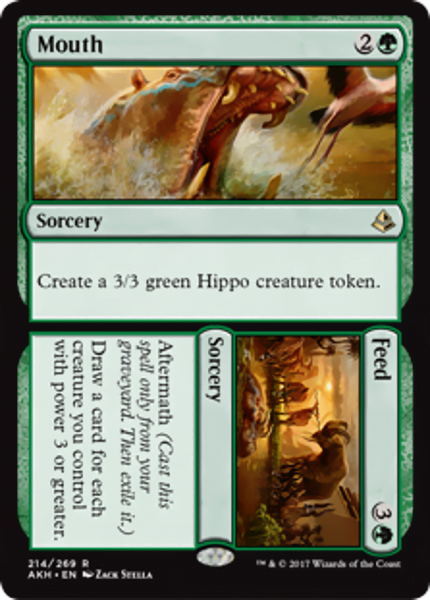 When you play a lot of midrange, you stop thinking of cards in terms of their optimal scenarios and instead on how quickly they can turn things around for you. In Mouth’s case, a 3/3 on 3 is rarely amazing but it’s usually good enough as a pressure option, since it’ll muscle past most utility dorks, and walls that meaningfully stop it are usually a different kind of threat. Feed is the real prize, though, since even drawing 2 cards for No Cards and 4 mana is a deal comparable to Harmonize. There are ways your opponents can interact with Feed’s draw, of course, and you may get greedy and try to draw 3 or 5 cards, but you’ll know those board states when you see them.

I mean, Abrade is the all-purpose, modern-calibre removal spell that helped shape standard. If you get a playset, you’ll probably have a home for them in most any red deck.

I mean I could bullshit you with Adorned Pouncer, or Desert’s Hold, because I did try to make a mono-white cheap aggressor deck work, or my Sunscourge Champion deck, or Nimble Obstructionist and other aspirational cards. I could point to Ramunap Excavator as a commander-uesful card, or Firebrand Archer as a way to give a Prowess deck reach, but. 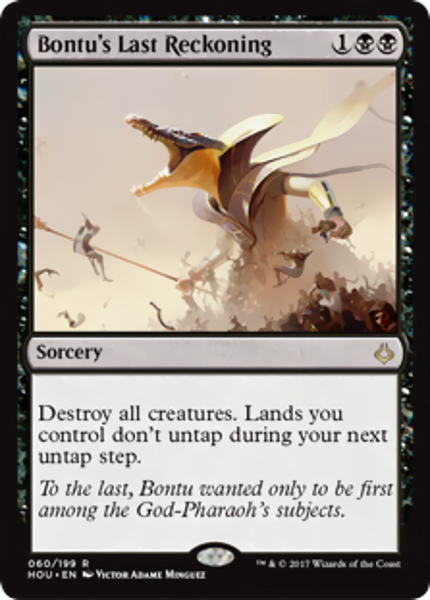 Bontu’s Last Reckoning is one of my favourite wrath cards of late because the advantage it gives you can be either a total pinch – getting it a turn early to wip away 2-3 threats from a fast starter – or if it shows up later, you can use it to reset the board and drop a threat in the same turn.

I have a Bontu’s in my cube, too, because it’s the best multiplayer wrath for a draft environment. Firing off a Bontu’s is a choice you sweat.