Zendikar block! One of the ‘great’ periods of Magic history, a ‘beloved’ set that featured ‘classic’ cards with a ‘challenging’ draft environment, with ‘interesting’ mechanics!

What struck me going back to Zendikar was the general antipathy I had towards it. Perhaps it’s because I didn’t draft it, or maybe it was because this was the era I saw an actual in-the-flesh Magic deck that was worth as much as a car, but maybe it’s also the period of Magic’s history where the wheels came off the Planeswalker experiment in the first big way.

I thought for a while there that Zendikar was a really great set I was misremembering, and I kind of do still like some of the things it did, with the quest mechanic and the small creatures that became bigger threats late in the game. Yet when I go back to look the set over I’m reminded by how much of the set was built around fetchlands and mistakes, and it just kills my enthusiasm for it.

Still, it wouldn’t be appropriate to act like there’s nothing in Zendikar, just less stuff than I thought. I’ve long tried to make the Bit Weird 4/4 for 4 Blue Flier of previous sets work (see Secretkeeper, and Chisei, Heart of Oceans), so Living Tsunami fit into that pretty smoothly. There’s also Guul Draz Specter, who is a rare combination of disruption and threat that gives your mid-game discard some additional value. It’s normally not worth emptying your opponent’s hand if your spectre will do it for you, but if you’re holding a mind rot and they have one card in hand, the mind rot becomes a Lightning Bolt.

Still, in the world of big mana decks and card selection, I’m almost always going to opt for the creature that ramps you, and that’s why it comes down to Oracle of Mul Daya. 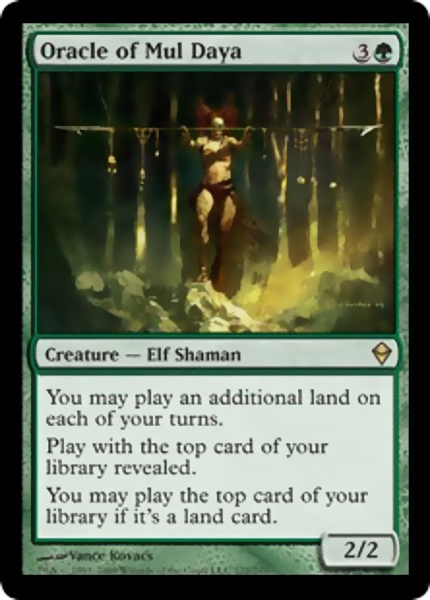 This is one of your EDH allstars, a card you’ll see a lot and which will usually result in the person playing it scoring 2-3 cards out of it even if they’ll also give you a pouty look when you finally kill it, as if somehow you’re the asshole for wanting to win the game. I know, I’ve practiced my pouty look.

The Oracle of Mul Daya represents one of my favourite kinds of card advantage engine, where cards you were previously using for one purpose take on another. Shuffle effects like fetchlands or search spells may get you not one, but two or three mana ahead, based on the hopes of flipping something useful off the top of your library.

Don’t know why she’s an elf, though, that’s a bit subtle.

Worldwake! Zendikar, but Moreso. If you liked things in Zendikar, surely you’ll like them in Worldwake, right?

Ehayeeenanyway. The two cards I’ve played with the most in Worldwake are easily Wolfbriar Elemental and Dragonmaster Outcast. The elemental is kind of cute in that it’s one of those cards that tempts you to go big, but the bigness it offers is fool’s gold. Even if you play it with a kicker of (say) four, and then use Oran-Rief, the Vastwood to put a +1/+1 counter on everyone you’re still left with a giant game-winner of a spell that wins next turn and would be unremarkably different to just packing Blaze and splashing red. If your deck can support six green symbols, it can support a red. The Outcast is pretty cute thing that you can sneak out during other fights, or get into play early with an eye towards it going large if it survives, but after playing with it, it’s in this perfect position to be deeply upsetting to lose to in draft and not quite good enough for constructed.

There is however, a Worldwake card I’ve only recently been able to add to my collection – 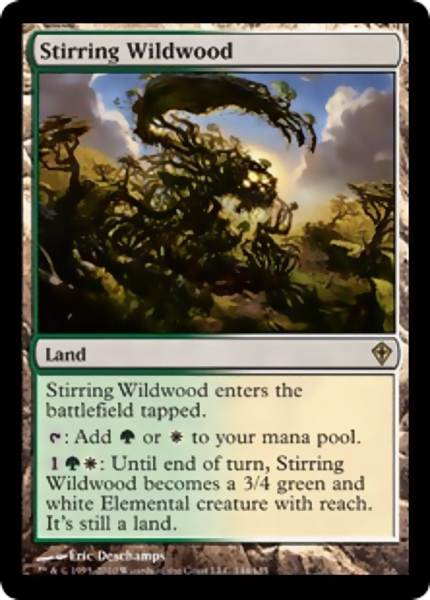 This is part of a cycle of dual-coloured creature lands that took all the way through to Oath of the Gatewatch to complete, and while, as with all things Return To Zendikar the second set were disappointing compared to the first, that doesn’t mean I’m not going to enjoy what I can. A 3/4 is one of those really sweet sizes, big enough that it’s hard to remove at instant speed, enough power to eat something troublesome and, if the game has attritioned out, easily big enough to close out the game without it taking forever. Stirring Wildwood isn’t as splashy as Raging Ravine, isn’t as high-prestige as Celestial Colonnade, but it’s one of my favourites.