Boy this era of Magic sucked.

The problem of Onslaught era magic was to look back upon a set full of forgettable okay cards that I learned to love, little roleplayers, niche friends – I can’t believe I forgot Wirewood Savage, for example! – but nothing that was so powerful it shook the world between Odyssey Block and Mirrodin Block. Oh sure, Goblins came from Onslaught but I didn’t really feel love for those little blighters the way I did for the cards I consider my pets.

On the other hand, Mirrodin Block is so tediously powerful. Every other card is basically an archetype, or gave rise to an archetype, or blatantly holds itself up as a design mistake. Going back and looking over Mirrodin block, I was genuinely worried that I might not be able to find a pet card from each set on the way to the good stuff in Kamigawa and later Ravnica.

Or I could bring up a few cards that were good enough for FNM but still not quite good, cards like Copperhoof Vorrac or Grab the Reins (the original Mythic Uncommon), but in the end I kinda gotta come back to the Mirrodin card that gets the most general use for me: 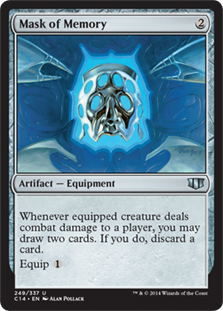 Mask of Memory is one of those generally good cards that you can jam almost anywhere you have a slot. It’s modern-legal and it can refuel a lot of aggressive, evasive decks, allowing you to keep pressure on in a swarm deck, or you can play it in Commander and use it as your excuse to keep swinging (hey, I don’t wanna punch you, Karl, but I do need some cards, you understand).

The mask fits on curve after a two drop, and sure, you’d normally rather put on a bunch more pressure at that point but if you’re like me and really like two-drop threats that grow, this is a neat little card to slot alongside them.

Darksteel was one of the most broken sets in Magic history, and the first time we really saw a aggro deck take over the world the way that normally combo and control could. This jarred with our ability to describe decks properly, and this is back before people really knew that ‘Prison’ and ‘Midrange’ were meaningful archetypes.

What’s more in Standard, some of us played with a lot – and I mean a lot – of cards trying to make them work, cards that weren’t good enough because [mtg_card]Arcbound Ravager[/mtg_card] existed and any testing had to run face-first into the sheer power that was turning every card into a lightning bolt that drew you two cards because [mtg_card]Skullclamp[/mtg_card] was also legal, good god.

If you took inventory of every deck I’ve made since then, you’d probably see the card I’ve used the most from this set is Darksteel Ingot, and the card I’ve tried to make work the most is probably Pulse of the Tangle. Still, I make no secrets of my love for Death Cloud, and well… 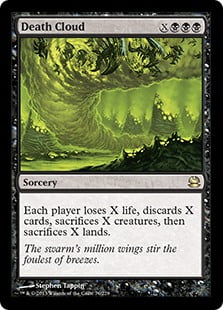 Death Cloud is one of my favourite control finishers, because while it puts control in a commanding position to win, it does so only as a byproduct of building a board presence that you’re then willing to blow up. You can Cloud up the board, and then become a topdeck machine, hoping to beat your opponent down with whatever your deck yields before they recover, and you want to make it fast. I’ve done it with [mtg_card]Werebear[/mtg_card]s, and [mtg_card]Hystrodon[/mtg_card]s and I’ve even recently done it with [mtg_card]Kitchen Finks[/mtg_card]. I love this card, and I love the deck it lets me play.

Your honour, let the record hold that this slot should be [mtg_card]Eternal Witness[/mtg_card].

I own a lot of Eternal Witnesses – some nine or twelve copies, far more than I need, because I played it in everything, and traded for it aggressively – buck fifty trades back when the card was around and nobody had a deck for it to go in. On the other hand, Eternal Witness is a staple of almost every format it’s in, it’s great, it’s hardly my pet card. Everyone knows it’s great.

So do you look to the niche card I’m fond of but never use like the [mtg_card]Blind Creeper[/mtg_card]? The utility spell I jam everywhere and cut first, like [mtg_card]Beacon of Destruction[/mtg_card]? The now-combo-finisher that I played in standard as my deck of choice, Aurio Salvagers? My Death Cloud Mana Rock [mtg_card]Guardian Idol[/mtg_card]? [mtg_card]Grafted Wargear[/mtg_card], which played in standard just fine but never found a home later? No, I think for this we should look to a creature who gave me an effect I really wanted in a deck that was always going to lag behind [mtg_card]Tooth And Nail[/mtg_card]: 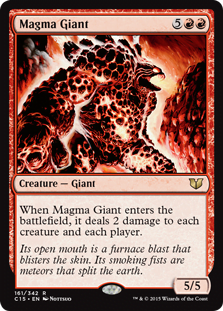 I played [mtg_card]Explosive Vegetation[/mtg_card] and Eternal Witness at that point, and while Slice and Dice was my preferred board wipe, the Giant did a good job versus some of the more low-to-the-ground fair aggro decks of the time. The veggie deck would typically run out turn 2 Rampant-style effect, Turn 3 Veggies, Turn 4 land and a 7 drop (and yes, sometimes Witness-And-Veggies-Again). That’s not the point. The point is that Magma Giant gave you a board stabiliser in a pretty cool way. It’s even flickerable if you’re looking for this kind of effect, now!

It’s even a decent size – you’d spend 6 mana for a 5/5 sometimes, and a single extra mana brings with it a pyroclasm. It’s even something you can reanimate! I’m fond of creatures that give me utility effects, and as far as clearing the board in not white or black, this is a robust effect until they printed [mtg_card]Caldera Hellion[/mtg_card], which kind of does the job better.