What if your Commander Deck gave you doki dokis in your kokoro? 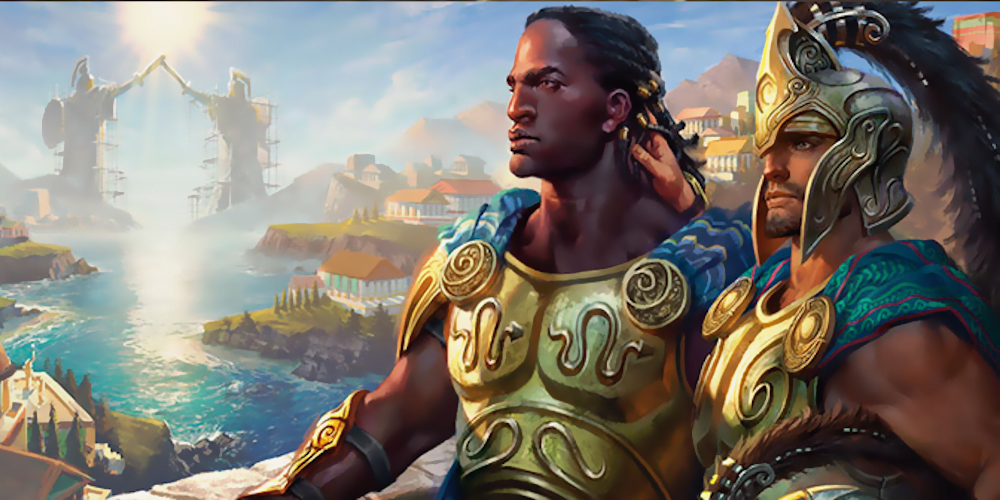 The Partner mechanic allows you to build a Commander deck with two commanders. This is sometimes brought up for its deckbuilding potential and the mechanical problems presented by the sheer scope of options, but then everyone found that Thrasios and Tymna was pretty much the best one and gave up talking about it.

But neglected in this conversation is ‘what if your commanders smooched?’ What if they were a battle couple, headlining this deck as the commanders that drove all the magical force you could bring to bear?  This is the question I sought to solve. What ships give you cool decks to build, what combo of powerhouse commanders also gives you a really thrilling ship to imagine holding hands at night as the fireworks burst in front of them.

Now, I would note that polyam ships are fine, but I don’t have a mechanical option for it here. The game rules are pretty simple about this: You can have two commanders if they have partner. You can’t have three or four. This does mean that this shipping is non-polyamrous, but as those are the rules as we have them those are the rules we’re going to go with. 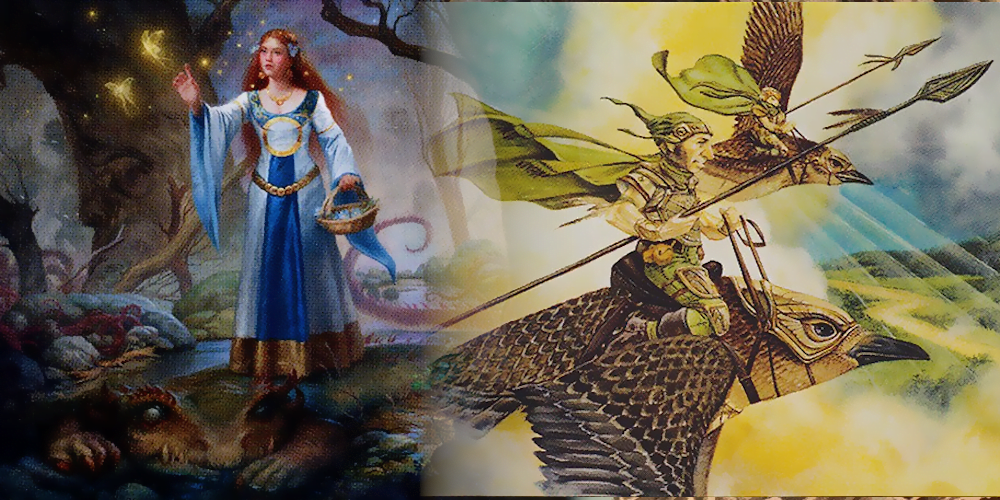 What’s the scale of the question like? Well, time to go bust out the charts and start eliminating options.

As of right now there are 78 cards with ‘partner’ on them. Of those, 22 are ‘Partner With’ legends, from Battlebond and Ikoria. For our purposes now, while some of those are clearly tag-team partners, some of them are, well, more like ‘person and pet’ or ‘terrible warbeast and person who has a snack bag.’ Point is, that they’re not really romantic partners, unless you have some particularly interesting fanfic about the mindset of flying sharks.

Once you have those 56 cards, there are some others who are easy cuts. I’m pretty open minded on some of these issues, but I do think the five commanders, Anvara, Esior, Falthis, Kediss, and Keleth aren’t options, because they’re more like, again, pets. Maybe familiars can romance familiars, that’s cute, I don’t know. That seems like a story that’s played out entirely with plush dolls.

Are there any other easy cuts? Well, there are some pretty easy ‘don’t ask about it’ ship pairs like Jeska and Kamahl, since they’re siblings, and I don’t think we should be trusting say, Ludevic or Keskit considering the whole flesh sculpting and necroalchemy things. Nonetheless, that’s still a big list of possible partners to consider as shipping combinations. Without checking for hard incompatibilities or groupings of impossibles (and Armix isn’t an impossible, you’re just a coward), that stil leaves me with 52 characters to work out in a matrix of smooching.

With our existing ‘two partners’ rule, that means we’re looking at 1326 pairings. That is, simply put, too much, too many, and too hard.

But then I remembered wise words from a wise man. 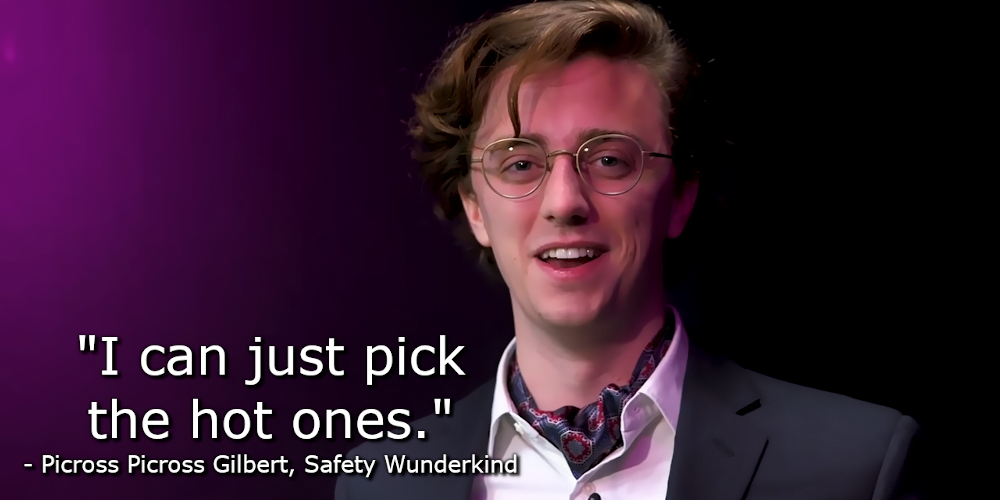 So I’m just going to pick a few where I like the ships.

There is however, a tragic omission from this list. See, there’s a character in the partner lineup I have a huge fondness for as a character, and even as a shippable archetype, a smug shapeshifter who is juggling ten plates despite their ability to juggle capping out at eight. You might know this character archetype as ‘a Double Trouble,’ while I know them as the far superior ‘Kameleon’ or ‘Soubrette.’ The character of course is Sakashima, a character from Kamigawa The Only Time, and one of my favourite stories from the time featured them. So why not include them on this list?

The problem is, there’s no Partner character available for them that clicks the way I’d like them to, setting aside the mechanical needs. What I want for a character like Sakashima is someone practical and grounded who can both endure their shit but also a good reason to endure them, but who isn’t a cop. Akroma, Vision of Ixidor (why isn’t she also an Illusion, people) is close, but uh, she definitely is a cop.

Which is a shame, because Sakashima/Akroma does have a pretty cute synergy, where they both give each other +5/+5 and threaten lethal commander damage. Heck, give out Double Strike somehow (lots of good methods there!) and suddenly you’re one shotting people with your dynamic duo.

But ehhhhh, the ship doesn’t work.

Bonus bonus: Bruse/Akiri is adorable because I think Bruse is hilarious and I imagine him as a great big sweetie who likes to cuddle, but Akiri’s currently in a relationship in the narrative and you know, I’m not interested in digging into that discourse. 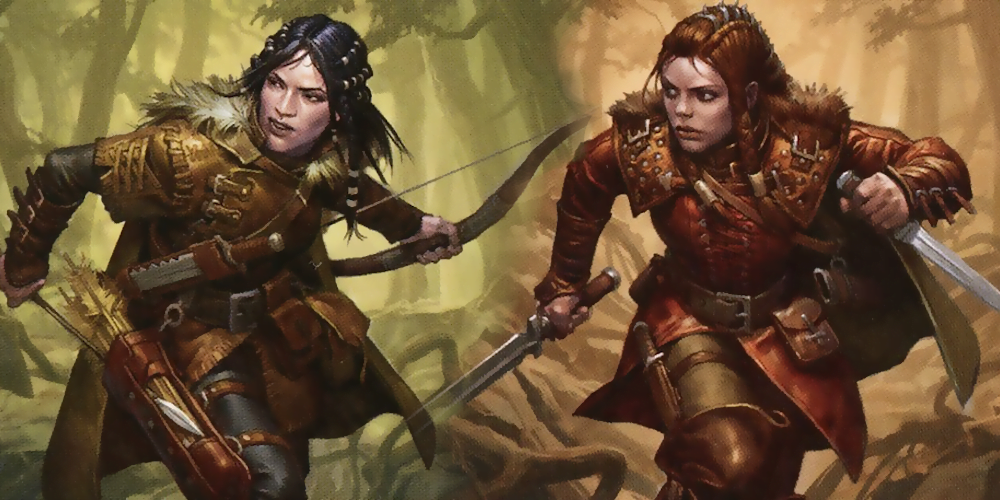 First up, Halana, Kessig Ranger and Alena, Kessig Trapper. These two were always going to show up on this list because they’re designed to work together. The deck they point you towards wants to have creatures in it, and it really wants those creatures to have power of 2 or more, and maybe if you can swing it, some additional cost that you pay after they enter the battlefield (so they can use Alena’s ability to pay for it). This is a spicy brew, because you get access to Bramble Sovereign, Electropotence, Flameshadow Conjuring, and one of my faves, the Wildborn Preserver. You can make a Colossus of Akros go monstrous the second it arrives, get a free fire out of the Soul of Zendikar or Soul of Shandalar, or, you know, just throw mana into big spells.

Halana clears a path and Alena makes explosive things happen behind it – that’s cool. Also, these two are just your classic pairing of Battle Lesbians. In a horror setting where characters can often feel doomed from the outset, it’s nice to have these two little shining lights that aren’t, you know, dead yet. Plus, as trappers in the deep of the Ulvenwald, they teamed up with werewolves to fight Eldritch Abominations, so that’s nice!. 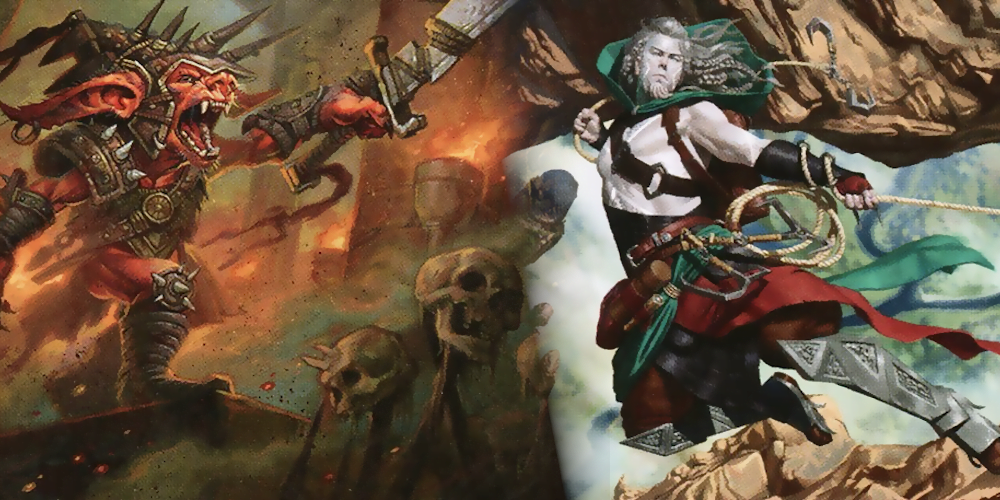 Up next: Ardenn, Intrepid Archaeologist and Rograkh, Son of Rohgahh. I don’t know how I feel about the logistics of this pairing or who tops or bottoms but I absolutely can appreciate the core idea here.

Ardenn is an explorer; he looks for secrets in the skyclaves of Zendikar, effectively being one of those adventurers who thinks ‘sure, I can solo this dungeon if I’m careful (and I’m not very careful).’ Rograkh is an outcast prince, who belongs to a royal family that lives in the beating heart of a dungeon overseen by one of the most terrifying dragons in the game, Prossh, Skyraider of Kher. This gives you a story space for these two to work together, pushing into the shared mystery of the Kobold’s domain and avoiding the vast dragon that will eat them. It gives them time to grow closer. To respect each other’s abilities, the ferocity that Rograkh brings, the tricksiness with weapons that Ardenn can bring. It’s one of those narratives of mutual respect that grows into battle-hardened love, and what can I say, I’m a sucker for that.

Anyway, mechanically, this is also a slam dunk. It’s pretty rare to see a tempo structure as obvious as this – get some busted equipment onto the battlefield by hook or by crook and let Ardenn throw the weapon across to Rograkh, who can then just serve hard with it. It’s a boros gear deck, and those work fine. 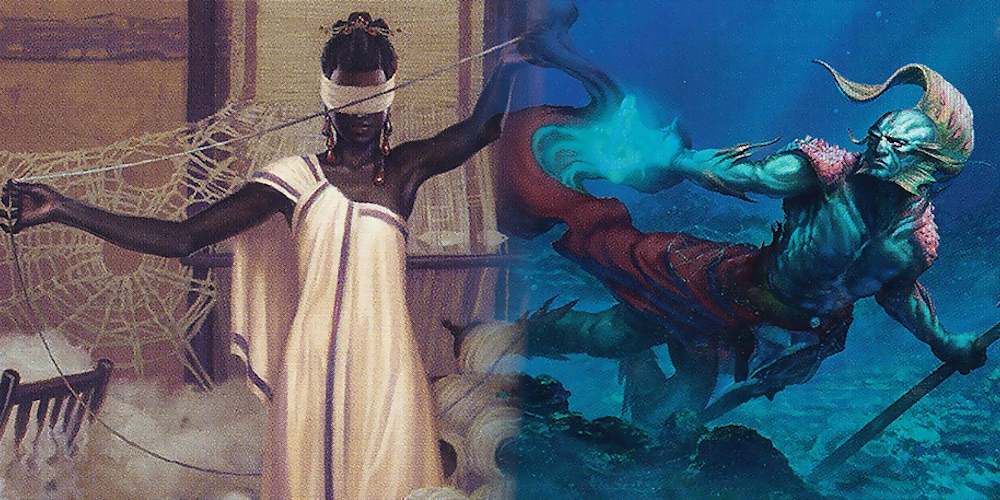 If you’re not aware, Thrasios, Triton Hero and Tymna the Weaver are the most painfully overexposed pair of commanders in Competitive EDH. In a format where the best things about commander feel worn away like the sense of fun and the characterisation of your deck relying on your commander to shape the way the deck should work, it is sad that these two represent possibly the best commanders for almost all permutations of their colours. Like if you wanted to make a UG commander deck, if money isn’t an object for the mana base, Tymna and Thrasios are probably your best commander pair even if the only white or black cards you have in the whole pile is Tymna.

Basically, I didn’t want to come down to this.

See, the thing is, as characters, first, both of them are from Theros; they’re both characters who share the idea of an ideology of gods. They’re both characters who see the value of connection and trust. Thrasios is this thoughtful, poetic boy who swims out and explores and comes back with stories of what he’s seen and what he’s learned, and Tymna controls this literal web of threads that let her connect to and understand the world. It’s just very sweet to me to imagine these two sitting and talking quietly of an evening, as Thrasios tells his blind girlfriend the things he’s seen – and she tells him how what he’s done is connected to the world. It’s just very wholesome and sweet.

Thrasios and Tymna really works for me as a ship.

There you go. Some ideas for some decks you can build and the ways you can see their ships working!