First things first, you should read this thread by Orion Black. And this other thread by them. You’ve already seen them? Good! Great! I don’t want anyone who is interested in or playing Magic: The Gathering to do so without at least some awareness of this problem, this persistent problem. I guess my main thinking here is that the least I can do is make sure Wizards has the reputation not as ‘one of the good ones’ but as ‘that one has fucked up a lot and needs to fucking address it.’

I haven’t been playing a lot of Magic: The Gathering. Just other things going on, plus any time a banning happens or a new set releases, prices on MODO get a little weird, in a way I don’t appreciate. Typically if I wait a month, all the things I want to play around with get a bit cheaper, and this few months in Magic’s history have been

The last time I was playing, I was playing, I kid you not, a budget standard Walls deck, using High Alert and Teyo, the Shieldmage. This means that I haven’t really been paying attention for two whole additions to standard, and I also missed the return of Commander – not 1v1 Commander, but Commander – to the MODO interface.

Let’s then talk about a card I’m kinda intrigued to play with in Commander, but can’t see the ways I’m going to make them work: 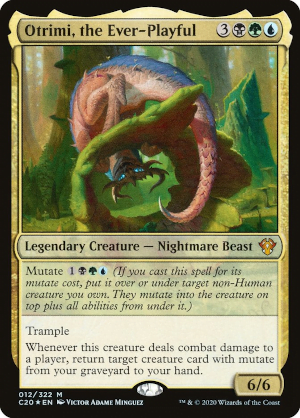 Otrimi is an interesting commander. There’s a lot about Otrimi that’s a little ho-hum: it’s a big creature, it’s a Nightmare and a Beast, and there are some synergies with those, though not a lot of particularly remarkable stuff. It’s got a triggered on-hit ability that lets you reuse mutate cards. It’s big. The place all the interest concentrates is on the mutate ability. That commando ability is basically trinket text.

Some quick run-down on the details of Mutate:

This doesn’t give us much latitude for things Otrimi can do as far as milking value per se, but it does sort of outline some ways we can’t use Otrimi out of the box. In the end, Otrimi is a card that is primarily good for taking something we already had that’s good, or survivable, and simply making it bigger. 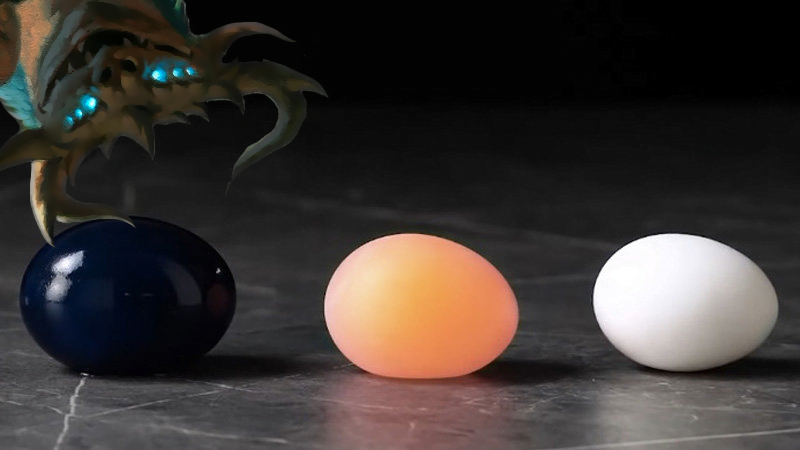 If you know my particular type of commander deck building, I like redundancy. I like it when I can reliably jam an effect, which results in the use of what I’ve learned as the 8×8 model: Take 8 effects you want, then find 8 cards that fit each effect. Then you have 64 cards and you can shuffle them up and add lands. This means there’s a lot less worrying about whether any given card is better than another in the 99 – I just can look at it in its category of eight cards, and see if it’s better than any of those.

The problem is, what eight categories are we doing for Otrimi?

Here are some thoughts:

Otrimi isn’t very exciting on its own. Oh, sure, it’s a 6/6 trampler, that’s not nothing, but raw-dogging a Otrimi out there seems underwhelming. I mean, I don’t imagine I’ll avoid it, because you do what you have to do, but I feel that whatever situation I can be in, I’ll probably want it to be a situation where I can cast Otrimi onto an existing creature and give it haste so I can attack and get something out of it.

If I can get an effect on a creature, I want to.

This seems like such a hard thing to make work, for me. Mutate cards don’t naturally get into the graveyard unless people are killing things, and the main thing people are going to try and kill is Otrimi, because it’s really big. On the other hand, if I do have some Mutate cards in the bin, Otrimi represents a way to recover thoes cards.

It’s hard to know in a vacuum how well a rebuild strategy works unless you can make it definitive – recovering everything for example. What if, though, I had creatures that could be sacrificed or were willing to die, so the mutate triggers could be reused?

Sacrifice triggers aren’t out of the question, and neither are other mutate cards.

Otrimi can easily get to 7 power, but getting double strike, 11 power, or more, is difficult by comparison.

There are so many good cards in Sultai colours it’s very hard to say for sure what the best utility package looks like. This means that no matter what I pick, there’s always going to be some feeling of ‘oh, I can’t believe I’m not running X.’ This includes Planeswalker packages – I already own some of those, so it’s not hard to play with them.

There are going to be hard cuts to hit the theme.

Let’s put together an example list not of the actual piles, but of the kinds of piles I might want:

Ramp/draw/removal is a good, solid set of three sets to include in every commander deck. Having it so any given sample of ten cards will probably have a ramp and a draw spell in it is a good place to start. In this case, those cards can also be made to work with the existing idea of trying to use creatures; Sakura-Tribe Elder and Fertilid are solid replacements for Rampant Growth and Kodama’s Reach.

While compiling this list of possible options, I made a few observations of specific cards that get a little weird in an Otrimi deck.

Ochran Assassin. This text isn’t widely available on cheap cards. Otrimi having trample and deathtouch means that as you can serve with Otrimi and kill six of the defending player’s creatures. The problem there is the card itself isn’t very good to start with.

Bristling Hydra. If you build an energy theme into your deck, there are a few cards that synergise pretty nicely with Otrimi. They all add pressure, though, rather than adding survival, except this one that can get hexproof.

Hungering Hydra. Perfectly good for late-game mana sinking, but you can also just cast it on turn 3 for 2, you can then mutate Otrimi onto it and that seems pretty hard to handle.

Troll Ascetic. If you do want to make a Voltron Mutate pile, this and Thrun, the Last Troll are two of your best possible optoins to mutate on to.

Untamed Kavu. If you’re rushing out Otrimi, this 2-drop gives you vigilance; if you get it later, it’s a 5/5 that turns into a 9/9 under Otrimi.

Wildborn Preserver. Can be flashed in, gives Otrimi a keyword it doesn’t have, and can make cheaper creatures you cast after Otrimi into a big power boost for Otrimi. This is one way that hitting the tipping point of 11 power is pretty doable.

Drana, Liberator of Malakir is pretty good, too, because she gives Otrimi two keywords it doesn’t have by default, and makes it bigger. 6+7+8 is the 21 you need.

Leyline Prowler. Deathtouch, lifelink and trample are all very good keywords to have in the same spot, and putting it on a 6/6 means it’s easier to race a large quantity of enemy offensive.

Scale Up. If your build is a go-wide, lots-of-evasive, hard-to-kill creatures deck, Scale Up lets you hit very hard with an early creature, or, can make a later-game creature extremely scary.

Cold-Eyed Selkie. This deserves special mention because this is the card that got me started on making this deck in the first place. A 6/6 attacking, trampling Selkie on turn 3 seems like it could make me a nice mess of cards.

That’s some of my thoughts on the card. In the end, I don’t know if I can make a deck that works for Otrimi.