I’ve spoken in the past about Magic The Gathering‘s player psychographics, characterisations that the game developers use to describe and discuss the types of players that engage with their game. These archetypes are Tammy, Jenny and Spike, and they also kinda line up with other, similar efforts to categorise gameplay choices from the work of Roger Caillois, immense racist and clown-hater.

In the conversation about player psychographics, one Matt Cavotta introduced the idea of the Vorthos, a type of player who cared about and engaged with the game because of its lore, someone for whom the fiction of the play took paramount presence. In Magic’s case, it kind of needed this distinction because there’s a whole collection of people who engage with the game for reasons that treat the game as a secondary element of the game.

And then, with Vorthos, there was one more name that Mark Rosewater introduced, bringing their player nicknames up to five: Mel. 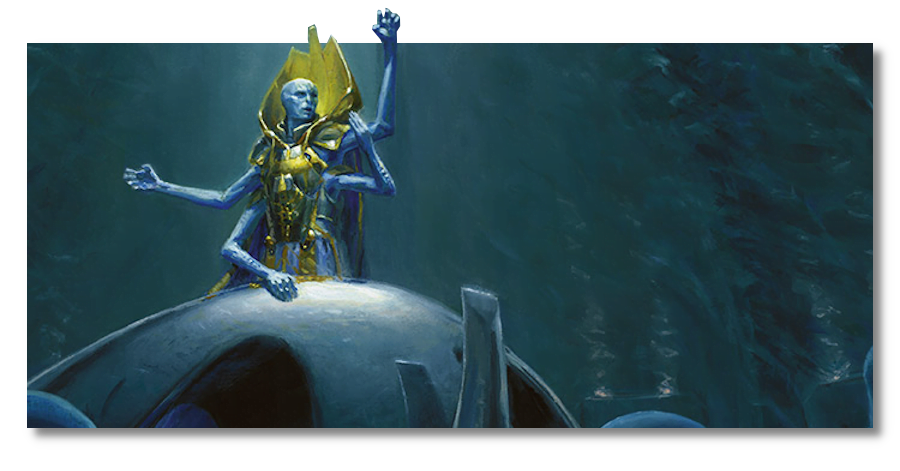 If we’re still going with Caillois’ model of Agon/Alea/Mimicry/Ilinx, then Mel represents Janet Murray’s addition of Rhythmos. Mel is the player who loves Magic because of the interaction of rules; the way that interconnected rules systems behave when put into proximity with one another. Mel is the player who finds the ways things interact as more important than anything to do with the pressures of winning or losing. This is as with all such things, a sort of ‘extracted’ vision of the archetype, mind you: Mel as an archetype can be described as doing things, but no player, even the most Mel-ish of Mels, is actually beholden to behave that way.

Mels are players who are often interested in investigating the rules and environments of the game because that interests them, and those players, as it happens, are just the kind of people who flock to the space of custom magic design.

It makes sense! Some players when they see a mechanic ask what can I use this card to do, but Mel, Mel looks at the card right in front of them and asks what can I use the bits of this card to do that aren’t this card? It’s a great impulse, it’s very accordant with design sensibilities, and I have no mark against nor complaints with the wonderful group of Mels who hang around in the custom magic card creating spaces.

We have a problem. 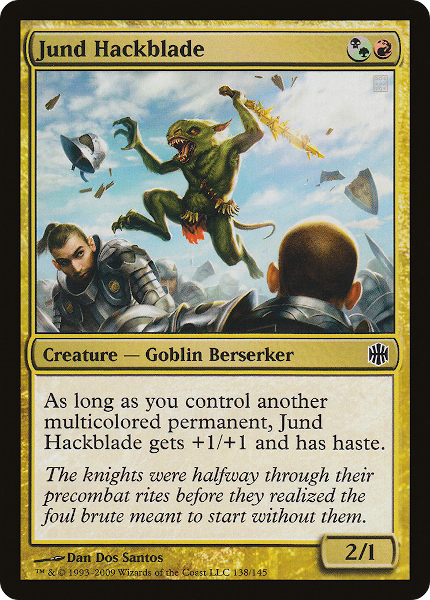 This is Jund Hackblade. It is an unremarkable workhorse draft common from the Alara Reborn set, which came out in 2009, 11 years ago. It mostly was used by decks to patch their early drops, in an environment that was full of three and four colour decks. The fact you could just drop this creature on the board as a 2/1 for RB or RG was a big deal. The ‘big deal’ of this card is its mana cost, which is both conventional multicolour, and hybrid.

This mechanic was used on fifteen cards and it’s sometimes called ‘hybrid gold.’

And eleven years later, Wizards have never used it again.

Now, Wizards have been asked why hasn’t this shown up again, and Mark Rosewater has specifically mentioned it’s because these mana costs confuse players, and don’t open up space that’s worth exploring. This mechanic was made, explored, given the ultimate live-fire test, and found to not be a good mechanic. There’s not enough interesting space to compensate for its confusion. This would be, conventionally, seen as a user experience problem, tested, and we’d be done with it.

And so, we get more designs. Designs that use this tiny space where something needs to be valid across two colour combinations but interesting in the doing. Designs that strive to push this workhorse mechanic, made to fill a space in a draft set, into proving that there’s more stuff, better stuff it could be doing. We see this a lot, and it comes in waves. Someone remembers one of these cards, uses the gold hybrid design, someone else makes cards based on what they saw, we get a rash of these cards that don’t really inspire or work or fix the problems, and then… it goes away for a while. It’s about a mechanical exercise, like ‘one mana planeswalkers’ or ‘how to destroy an emblem’ or ‘how to give white card draw.’ The problem is always approached in terms of ‘rules interface’ and never in terms of ‘is this a thing we should do, for gameplay reasons?’

Now, this is not to say this is a bad thing! But we need to recognise when we’re making cards that aren’t about what players can engage with, not about cards that are good or offer good gameplay or if we’re deliberately ignoring the lessons that Magic has learned and amazingly shared without us. We need to know when we’re designing things just to play with the rules and satisfy ourselves, with these game pieces that aren’t made for playing.

I propose we call these designs Mel Candy.

This is not perjorative! I know I’ve made a bunch of Mel Candy in the past, and still do! The point is not to criticise these things, but rather to recognise what they are: An impulse to play with rules, and not to play with players.