Alright, last time we talked about a purpose for a Commander 1v1 deck. Now we’re going to look at a deck like it, to look at a game plan, and then look at a useful theory for generating a first draft of a deck.

With those three colours in mind, and an eye towards midrange decks,

The deck I’ve been trying to make is something of a Jund deck. Jund is a historical archetype that sort of coalesced in 2009; normally it was a three-colour kind of General Good Stuff kind of deck, but it wasn’t until 2009 and the defining of the colour trio as the identity of Jund, and the deck was given a lot of really useful cards for a game plan, that we got the thing that people call Jund.

Let’s pull up an example 2009 list, from the MTGSalvation (still banned!) wiki:

Jund is, essentially, a deck that wants to pressure your opponent while disrupting in ways to earn advantage. That’s a broad summary, but it works out more or less that way. You play threats that aren’t necessarily aggressive, but are robust.

A good example is Putrid Leech, or Sprouting Thrinax. The Leech could come down on turn two, and then serve on three, without any backup at all – and if your opponent blocked it, you could spend two life to eat one of their cards, and if they didn’t, you just got ahead. The Thrinax had a perfectly good body at its cost, and it mandated at least one card to kill, maybe more – even if you had the lightning bolt for it, you still had to kill its three buddy creatures that followed. The creatures in Jund weren’t there to do the best damage as quickly as possible like in Goblins decks once before them, and they weren’t there to overwhelm with synergy – they were just there to try and get the most value out of as few a number of cards as possible.

The deck coupled this with some very efficient and flexible removal – lightning bolts and terminates could kill a lot of the creatures around for a decent cost, and Blightning was straight up just ‘get two cards out of your opponent’s hand, plus speed things up.’ In this deck, a hand of Lightning Bolt, Terminate, Blightning isn’t actually a good hand – because you don’t have anything to put on pressure to go with your removal. You could afford slower lands and later effects, because speed and synergy was less important than creatures that could win fights entirely on their own.

This Jund deck, then, breaks down sort of roughly like this 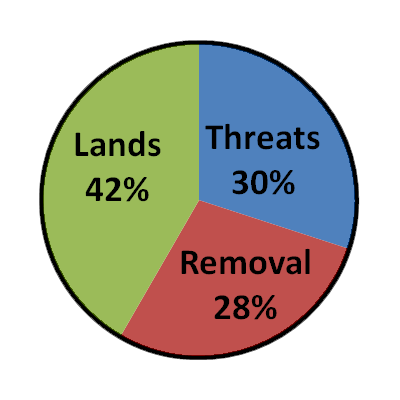 So the deck has almost as much removal as it has threats, and its manabase is quite sizeable – with some ways to get value out of that manabase.

That is, essentially, what Jund was. Now, can we use that philosophy and design to build our 1v1 Commander deck? And how do we approaching making a Jund deck, with this ideology in mind? Next step, time to learn about the model I use for Commander builds:

8×8 Theory is a mathematical starting point for building EDH/Commander decks, which I obtained from The 8X8 Theory tumblr. The basic idea is that a Commander deck is 35 lands, 1 commander, and 64 spells – more or less – which means you can view them as 8 stacks of 8 cards each representing a specific effect. In this case, to get the same effect as Jund, more or less, we’d want a deck structured reasonably similarly. Commander 1v1 still has a few extra components to it – life totals are a little higher and your opponent can be doing a lot more goofy stuff with a vintage card pool. Also, when decks can be a bit random,

Mana will sort itself out, after we’re done. Don’t worry about that.

If we have 8 piles of 8, and we want to gain advantage out of as many cards as we can, then we can look at these 8 piles as 4 piles of threats, 4 piles of removal. 32 of each, right? But that doesn’t quite fulfill the purpose. Let’s think about these things not in terms of direct parallels, but in terms of what we want things to be…

And remember our Hermit Druid package? The anger, the dredge, the resilience present there? Let’s do a real quick rundown of effects we want.

Now, in these packages, we’re going to have more information fold out when we start working on them; I’ve ordered them in term of priorities. Particularly, the combo kill option will inform the way the rest of the deck comes together.

You notice what’s not come up yet?