Okay, Modern is a silly place. This is not going to be about a cutting edge deck. This is the kind of deck I like to write about and play, because it’s not trying to be about playing in a specific metagame environment, about being in a tournament space. It’s a combo deck, but it looks a bit like a control deck, and it uses an interaction that’s probably too slow for standard, but also gets to do stuff I tend to enjoy – flickering permanents and making memes.

There’s this card, Felidar Guardian. There’s this other card, Saheeli Rai. Together they form a combo that generates an infinite number of hasty artifact cats, or rather, an arbitary large number of hasty artifact cats, so you can stop when you want. It differs from a lot of combos in that the cards are actually good on their own, with Saheeli being a planeswalker that scries through your deck to find things, and the Felidar Guardian resetting a lot of possible permanents. 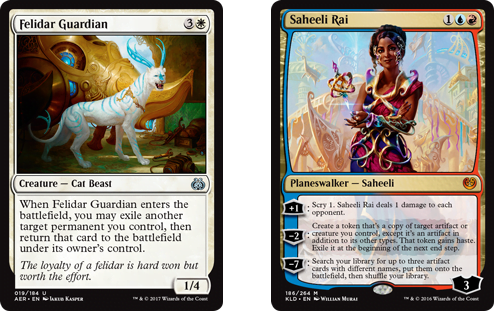 Now, I like Felidar Guardian decks, because I like flickering things. I like when my value creatures give me more value, and I’ve liked that since Astral Slide, a deck that isn’t actually good anywhere any more, but let’s not get bogged down in that. The thing with this combo, known as Cat Lady for a while, was that it was pretty powerful in Standard (so much so it got a sort-of emergency ban?), and my love of durdling and flickering creatures is kind of weak when compared to ‘just winning the god damn game out of nowhere.’

Also, flickering creatures with the Felidar Guardian is fine, but also not particularly impressive these days. You want stuff that’s already on the field with the Guardian around, and flickering wants to be cheap, and so it’s not good for recurring on the battlefield, and so on. Still, War of the Spark gave us a bunch of planeswalkers that tick down and you can use the Guardian to flicker a bunch of them. Funnily enough, in these colours, there are a few really good Planeswalkers for this, and they seem to all be girls.

And thus, from Cat Lady, we now have:

This deck could be improved massively with the addition of Snapcaster Mage, because at its root it is a 1-2 mana spell based control deck that wants to dig through a deck and win reasonably quickly. Chandra, Acolyte of Flame is a pretty decent kinda-Snapcaster who has supplied some games with an extra few points of damage, but it’s very clear to me the difference between 3 mana and 2.

You make lands and planeswalkers, protect yourself, slow your opponent down, dig for cards, kill threats, then find Saheeli or a Guardian or whichever you don’t already have, then win the game immediately.

It’s not great, but it is fun!