Magic: The Gathering is a game which at its root has a sort of culture built straight into the game’s mechanics, with five distinct flavours of play execution forming the centerpiece of the game’s style and mechanics. Players introduced to the game will almost always have something to say about how they relate to the colours based on first impressions, and the flavour of the colour pie represents a truly excellent, trope-level structure for not just game design but wholesale story design. People may not even consciously think of it, but the colour wheel lets them choose how they want to play the game, it gives them strategic insight into how others play the game, and it lets them talk about characters and mechanics with the same fluid ease.

The colour pie is great. 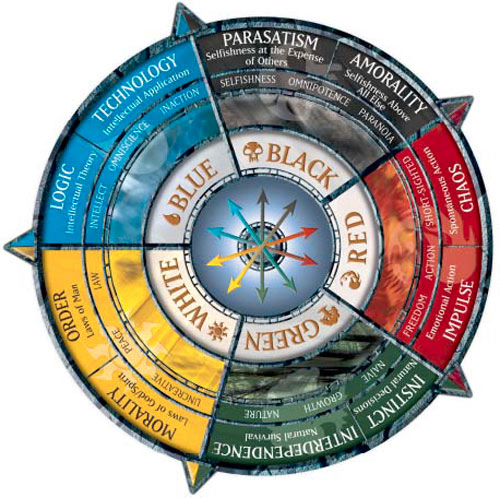 A thing that still surprises me, then, given my deep affinity for them, is how rarely I wind up playing green and red together.

Green is easily my favourite colour; it’s got the things I like and the things it gives up to get it are to me almost always forgiveable to me. I don’t mind having to invest, I don’t mind waiting for things to grow. I appreciate and respect resilience and interconnectivity. I like enormous creatures that stomp on through, I like building on investment, I even like slow, grindy, life-gaining control as a refusal to just die in the face of opposition that demands otherwise. Red is a perfect cousin to it, bringing beef, reach, removal and of course, flavour-wise, the primal parts of nature, red in tooth and claw. Red-Green beasts was one of my favourite decks, as was red-green veggies in Onslaught Standard. I played Green-Red Skred in Coldsnap draft and standard, and even tried green-red spirits in Kamigawa.

Still with my decks lately I’ve been much more likely to play Golgari colours or Simic, and that’s a real bummer – heck, my Anointed Eternals deck gets a lot of my attention right now. With decks powered by cheap cycling ally-colour cycling lands right now I’ve been particularly inclined to try and make ally-colour pairs work as they’re really good, and cheap!

Still that’s not to say I never wind up loving a Green-Red deck, as this latest list shows:

This deck works by classic Madness principles; you play out a creature that lets you discard things, pray it lives long enough to attack, then you attack and use its effects to pitch things for discounts and hit your opponent in the face. You have a new Arrogant Wurm in the guise of Honored Hydra, you have a new Aquamoeba in the form of Furyblade Vampire and you definitely, definitely don’t have anything as good as Wonder or Circular Logic. Sorry.

Still, the deck is fun and it gets to play with big beefy creatures, and can curve out extremely aggressively. I’ve been musing on adding some werewolves and focusing more on things like using Embalm to skip turns where you’d normally cast spells, but we’ll have to see that list another time.

It’s not a great list, I’m going to be honest with you. You are going to face zombies in the casual room and those decks can just drop two lords and vomit into your shoes. I don’t know how you beat Ramanup Red either. Really, anything that you consider a The Deck in standard is going to beat this one. Yet in the general casual room, with things like mill and fun halfway decks like this one, you’ll find this is a lot of fun to play and gives you at least one interaction that I think is pretty cute.

Every creature in this deck counts for Feed! You need to be careful with it – flipping your Kessig Prowlers, making sure your Furyblade Vampires have cycled a card away, and Noose Constrictor needs the same. Still, being an aggressive deck that can reload a hand during a board stall is pretty sweet, even if you’d probably much rather do that after a board wipe. Still, that’s for a Spring // Mind deck, right?

The thing that struck me about this deck was how mana constrained me from dealing out all my threats – not because I was pinched on mana, but because I seemed to just constantly have big, scary threats worth using. Furyblade Vampire is a particularly cute addition because it can give you a turn 3 serve for eight, which is kind of scary.

Normally when I make red-green I find the thing that frustrates me is a propensity to gas out, to just vomit out my hand and wind up without anything worth doing later on, but this deck seems to keep things coming and make even late-game dead-ish draws into moderately good ones.

In the end, this deck is very simple in its purpose: It wants to make its outsized creatures, turn them sideways and bruise your opponent’s face. It has a bit of haste for surprising wings, a bit of burn for late-game reach, and it can discard cards like Hydra and Feed without it technically costing you ‘a card.’

On the other hand, the deck is very susceptible to things like Zombies, which can make a lot of throwaway blockers, slow you down, then run you over with better creatures or Menace forces. You lose a lot to people who can pack board wipers like Fumigate and even Yahenni’s Expertise is a rough one on you.

Manabases And The Green-Red Problem

Part of why I feel I have had such a hard time playing Green-Red in general is that it’s not a colour pair that has recently been pulled towards the midrange or late game. There isn’t really a Seasons’ Past skeleton with red, for example, or Sun-Scourged Champion in green. There is rolling thunder, but it’s not matching a lot of other tools for generating big piles of mana either.

What that means is that you’re going to be pulled towards speed, and speed brings with it a need for lands that enter the battlefield untapped. That pulled me towards decks like Fires of Yavimaya style aggression, which wasn’t even really an aggro deck but a midrange deck that got started early and had a combo out in super startling ways.

The thing with all these decks is they can’t afford to ever stumble, or have inefficient turns. You can’t make use of an extra mana floating around, and having say, two turn twos back to back is really not as good as a turn two and a turn three. That meant that mana constraints become even more noticeable, with fewer parts of your deck made to catch up with points you lost.

With that in mind, this deck I lashed out to grab some Cinder Glades, which helped the play of this deck immensely. I hope I’ll get a bit more play out of them before they rotate out. Wait hang on that’s only a few days. Heck–