Throne of Eldraine really has a mark on its name as being a set that led to one of the shortened banning spans. It’s really rough, because as bad as Oko is as both a character presence and the impact he had on standard, there are some cards in Throne of Eldraine I didn’t expect to like, and even missed wholesale that have crept up to be some of my favourite kinds of card.

I do like playing around with uncommon engine cards, and one of the sadder things to me about small sets or sets that do poorly is how uncommon engines often have to make do with only the cards in their set and that’s it. This isn’t engines like you see in Innistrad where we’re absolutely going to see more werewolves if we go back there, it’s the sets that failed to catch an audience. Sometimes an engine gets support outside of its block and still isn’t good enough (hi there, Earthshaker), and sometimes the engine card is great but there isn’t adequate support for it in the format (hi there, Sylvan Echoes).

And yes, I have tried making all of these work.

It’s a long path we’ve walked to get here, but well, you don’t come to my blog if you’re not willing to follow a trail of crumbs. 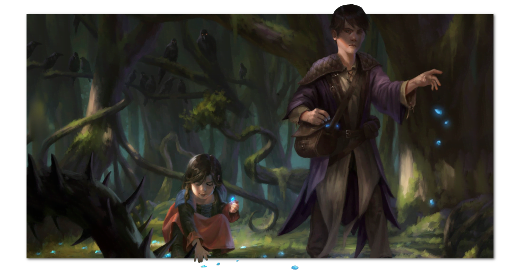 I don’t doubt we’ll see Eldraine again, but I suspect it’ll be a while and I suspect that while means that for now, Trail of Crumbs has to do all the work it can with what it’s got. Jund and Golgari Food has been tearing up standard for a while now, and it’s also a deck where you can make a meaningfully cheap version and don’t lose out on how the deck works. I even lashed out and bought myself some Lilianas and Vraskas and have a neat little standard two-coloured version of this deck (thank you Patrons).

The standard casual room, however, is a place that does not have a lot of action when I’m playing and so, I moved on to trying out the next spot I could: Pioneer.

Pioneer does not give this deck a lot, but it doesn’t give it nothing. Particularly, the main addition is Bloodbriar, a creature that benefits from the food and cat jumping into and out of the bin and gives you another threat that can apply pressure, and in many cases even turn into a pair of food itself. There’s also the Greenwheel Liberator, which pulls more towards early pressure, and sometimes can just hit the table fast enough to cause a problem all of its own.

Sometimes I wonder if the decks I build are less ‘good decks’ and more just ‘a bunch of things I like doing at once,’ and that’s sure what this one feels like. Trail of Crumbs is a fantastic way to dig for cards, it limits your deck to permanents, it will still flood you out sometimes, and it’s wonderful to spend time in a deck like this slowly but surely grinding out just little bits of advantage, turn after turn. There’s this idea of deck velocity, the speed with which cards change zones, and for a non-red, non-combo deck, it’s very nice feeling this deck sluice cards around at a reasonable rate.

This build of the deck is nine dollars on MTGO, and I recommend you try out a deck like this there, because the bulk of that value is the Overgrown Tombs. Right now is the time to buy Ravnica Duals, because they are extremely cheap and will go into every wider-format deck you can get your hands on. Other than that ,the rest of the deck is a lot of cheap cards, either uncommons that have a hard time maintaining high value (because they just show up so much more often) or rares that aren’t particularly high demand (because people are chasing mythics).

You can spice it up with some Planeswalkers, yes, like I said, my standard model uses Liliana, Dreadhorde General and Vraska, Golgari Queen as big, haymaker punches that just grind the game out against people who expect to remove all your creatures, but those cards together add another twenty bucks to the overall deck. Affordable for some, not for others. 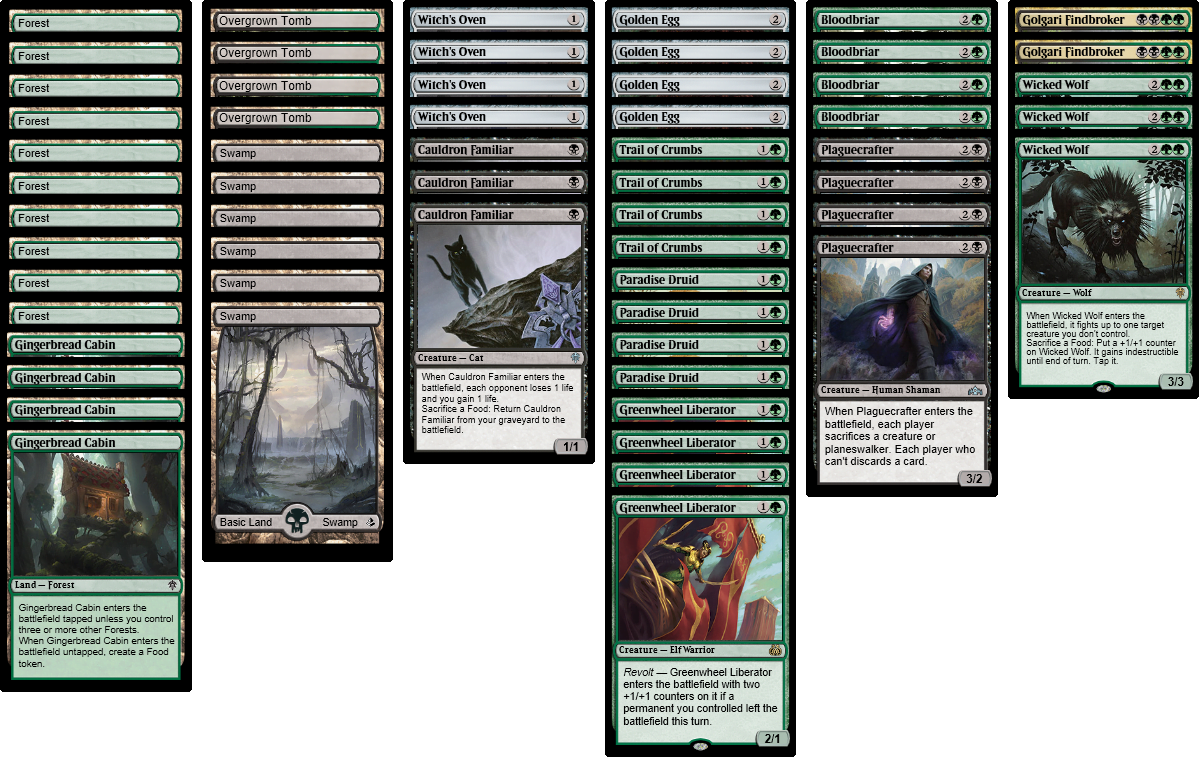 There’s a lot of little interactions here that I like? The way that the Wicked Wolf can attack and, once attacking, eat food to get bigger, while Trail of Crumbs earns you cards from each munched artifact. The way you can use Cauldron Familiar and Witch’s Oven to stall out against large ground threats that don’t trample, and the persistent threat of the Paradise Druid as a hexproof hazard that you can just send in once you’ve built up a board presence and a full grip.

One minor thing is this is a G/B deck where I recommend playing out your forests as soon as possible, so Gingerbread Cottages can arrive and add more food. You may, like me, be in the habit of trying to get your colours online even if you’re not casting anything with them, but in this deck you don’t need BB early, so don’t rush those swamps out there unless you’re going to do something with them on the spot.

Give it a spin, you might enjoy cooking up a big ole mess of slow, steady, value. It isn’t a deck that wins in a rush, and it doesn’t have a big king hit (though that troll king looks good). Instead, think of it like a good lamb roast, really: You have to give it thyme.