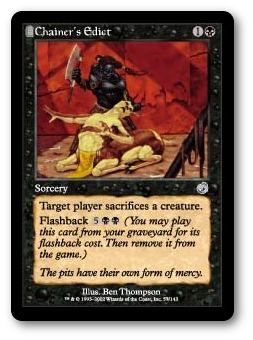 It was the tool of a bloated mono-black control deck, a simple removal spell you could use as early game disruption and ate a creature early, then ate another one later when the game was drawn out. Moreso than most other spells of its type, it funnelled the game towards its flashback costs – a two mana indiscriminate removal spell that provoked players to overextend as a countermeasure, in the same space as Mutilate, Chainers’ was the elbow-drop that you structured the rest of your removal around. Two mana was just right, and tricks like Goblin Sledder didn’t help against it – you were going to lose a creature, no matter how you cut it. Even the Savage Bastard Wild Mongrel wasn’t going to get around that removal spell, unless you got the hopeful Basking Rootwalla draw.

Despite living through that period of Magic: The Gathering and watching as every non-Astral Slide deck I played in the period crumpling like paper in the face of a good Chainers’ draw, it never occurred to me to really check back and examine Chainer himself, the man whose orders so bent the world. 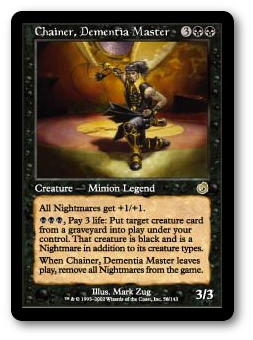 First things first, Chainer is not a body made for fighting. He’s a 3/3 for 5 and there isn’t any kind of special text in his box that makes him an individual threat. No double strike, no growing, no evasion – yeah, as a creature, Chainer isn’t winning any fights. He’s not going to get the 21 against a combo deck that’s done something weird to inflate their life unless you can truly and utterly lock the game up under control. As a 5 mana 3/3 he’s not great looking for aggressive decks either – while you can sometimes excuse putting a creature that below the curve in your commander slot for a damage dealer, it needs to either be explosive in some way or work as a closer. Chainer ain’t no closer.

Chainer is a tribal lord, but the tribe he’s a lord of sucks. There are ten Nightmares in Magic: The Gathering that you can put in a Commander deck:

Now, setting aside the two Actual Horses, because they’re just not great creatures, the other Nightmares, the Torment critters and references to them, were made to work alongside Chainer. Once upon a time, they were great, but in Commander, in the world of removal, where Chainer takes them all out, they are really not worth including in a Chainer deck.

Fortunately, though, we get to our next business, and the area Chainer shines: The boy’s got control issues.

Chainer can, without tapping, spend 3 mana and 3 life to put a creature from a graveyard onto the battlefield. That he can grab things from your opponents’ graveyards is exceptionally cute, and you should always be on the lookout for things you can do with that but it’s not really something you can plan for.

Thing is, you probably don’t want to just drop Chainer on the battlefield on turn five unprotected, because he kind of sucks like that. And since his power grabs stuff out of the graveyards, you can think of him as being a useful recovery tool. That recovery does have some problems, of course – if you use Chainer to rebuild a board, and then your opponent blows up your board, you have lost your Chainer and all those juicy graveyard cards are exiled.

This gives us a few quick ideas with Chainer:

If we approach Chainer as a control card, he doesn’t need to assemble anything in particular to win the game, but just uses his whole deck to get small advantages until he wins the game with king hits. This means you can do a lot of one-for-one trading, with individual removal spells, and think of cards about the ways they can get us ahead. You want to build flexibly, you want creatures that don’t mind dying, and you want ways to restock your graveyard.

Remember that this is sort of a ‘least case’ contingency: Chainer can get things out of your opponents‘ graveyards too, and he doesn’t need every single thing in the graveyard, so don’t go overstuffing it in the name of building yourself a monster. Winning the game is good enough.

Chainer wants mana, Chainer wants a lot of mana, black already has Cabal Coffers as a way to make a lot of mana. There are some ‘standard’ mana improvers like Gauntlet of Power, Extraplanar Lens, and your typical rocks. The Coffers are still your best bet.

Mana is important because being able to drop Chainer and use him on the spot is 8 mana – a feat you can pull off with mana doublers. Still, if you plan on blowing up the world, you don’t want to blow up your Crypt Ghasts or Nirkana Revenants.

Special mention goes to Phyrexian Altar – it’s a little niche but you’ll have ways to use it later.

Get In The Sea

These are the sacrifice outlets that both let you re-bury cards you already own, and also pre-emptively save your  freshly Nightmared from Chainer’s death trigger. While I’d normally recommend Carrion Feeder, the all-purpose trash-can here, it’s a creature and its inability to block means it doesn’t do what you want in a control deck. Pressure isn’t your job. Here are just a few favourites of mine:

Bear in mind that not everything that gets in the bin got there the hard way. You can run cards like Buried Alive to stock specific cards for Chainer but you can also use Cycling cards to put cards into your bin. While the two best cyclers for Chainer are Archdemon of Ifnir (saucy if you have other effects in this vein), and Scion of Darkness, they’re not to be forgotten.

Black also has two of the best Evoke creatures, Shriekmaw and Mournwhelk, and it gets a few Exploit creatures too – creatures that you can play as sorceries that jump out of the bin and can jump back in immediately:

I’m reluctant to mention Sidisi because she’s one of the most unfailingly strong cards in commander; in this deck, she’s BBB, pay 3 Life, tutor repeatedly, and that’s very very scary. It can make the game kinda static and boring. On the other hand she’s also a good enough body that you can just bring her back once, sacrifice something else and she’s a potent blocker and potential threat.

In a 1v1 Commander game ,you can just grab the usual suit of good Black cards that punch your opponent in the hand. There’s something of a standard suite – Thoughtseize, Duress, Cabal Therapy if that’s the kind of person you are, and so on. You could also go ‘chunky’ with this and instead pack cards that just straight up make your opponent discard a few cards at a time – the Mind Rots of the world. After all, what’s in their yard is in your toybox.

Now remember, Chainer is asking you to pay life. So let’s not go too buck-wild on things that cost you life. In fact, I heartily recommend slotting into your deck some cards that let you gain life, and stalling the board. On that note, may I recommend some cards for making bodies and gaining life:

Now while I normally like Aristocratic builds with cards like Zulaport Cutthroat, this deck probably wants to blow up the board a lot and those little critters won’t have time to stick around and bleed your opponent.

Chainer looks in graveyards, so if you blow up all your opponents’ creatures, it stocks yards for you and for them. With that in mind, here are some board sweepers you can jam into a mono-black deck, starting from cheapest going to most expensive.

When you wipe the board with Chainer out, recognise that Chainer’s triggered ability happens after everything dies. So let’s look at a scenario involving Thrashing Wumpus.

You use Chainer to retrieve the Wumpus from the bin, putting it onto the battlefield as a 4/4. It’s a Nightmare now. You wump once (it resolves), twice (it resolves), three times (it resolves), and Chainer has taken 3 damage and dies. His triggered ability to exile all Nightmares goes on the stack – but the Wumpus is now a 3/3, because Chainer has gone. Wumpus jumps into the graveyard again, avoiding the exile trigger. You can do the same thing with other, bigger numbers – just hold priority on creatures like Pestilence Demon, stack the activated ability, then just make sure that all the creatures die before the death trigger for Chainer.

In this list, while you can point to Big Damnation as a big scary power, I’d argue that you should be gunning to get Massacre Wurm and Kagemaro as your best wrath options, because they’re creatures. Some decks can handle a Wrath, they’re not usually equipped to handle four or five of them in a game.

I’m also a big fan of Bontu’s Last Reckoning because in a control deck, being able to spend only 3 mana on a wrath so you can do something else with the turn is worth a turn of being Shields Down afterwards if what you’re dropping is that scary. It’s also very affordable.

I don’t think there’s a single best list for Chainer. I think that he’s too flexible, too versatile. You might find you cut resurrection targets and exploit your opponents’ yards more, or you might find your format is too combo-oriented for that kind of control and you need to make a more midrange value build. That’s okay too. Just remember that when you have Chainer, you have options and you should always play that way. Do things to reduce pressure on you, then use your commander to take over the game.