WOTC Employees: This article is entirely about about unsolicited game designs, with example cards. 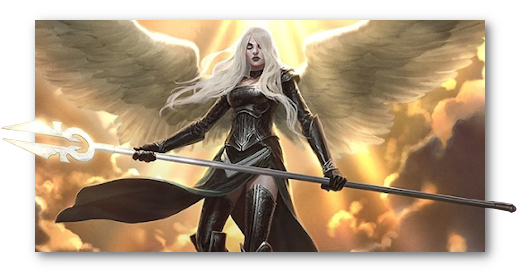 April is meant to be a month where I’m self-indulgent, and it seems one of the things I wanted to be self-indulgent about was wanting to make custom Magic: The Gathering cards to share on reddit, because what I really needed each morning was to open a post and go ‘pah, these fools don’t appreciate my genius.

I didn’t comment too much on the cards at the time – reddit comment threads tend to rarely look at things as a whole or examine different parts; you usually get one thread chasing one detail, or five threads mentioning the same thing. I wanted to let people draw their own conclusions based off the cards as I shared them.

Compiled here then is the first half of the project, with the rest to come later. Here’s a real quick rundown of them, without any particular order, with notes about what I was thinking and what they’re meant to do. 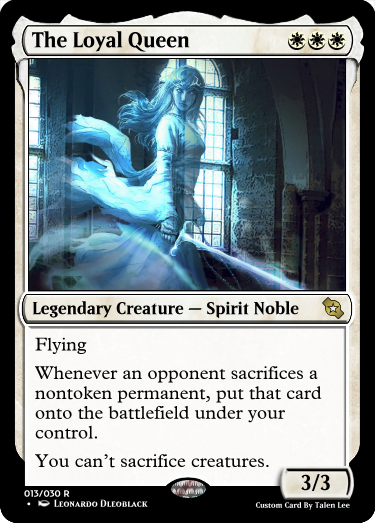 Who Wants It: It’s a hate card that wants to support a white deck that needs to catch up to sacrifice driven artistocrat strategies and punish coggy stuff.

I saw this card as being the commander at the head of a deck that either wanted to coerce sacrifices with cards like Cataclysmic Gearhulk, Balance, Cataclysm, Single Combat, or maybe punishing attackers with cards like Wing Shards or Blessed Alliance. There’s also cards like Michiko Konda, Smokestack, World Queller and Martyr’s Bond, these recurrent sacrifice effects that mean your opponents give you stuff. 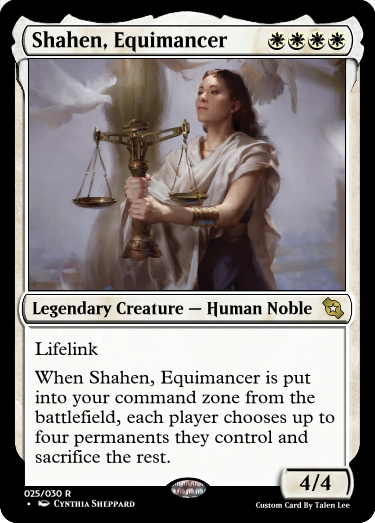 Who Wants It: An aggressive deck that wants to postpone the board wipe.

People talked about this as if the purpose behind it was to be a grindy board wipe enabler, which is… incredibly dumb, to me? People in commander spend early turns ramping, and the world is one where board wipes are fantastically common. This card was designed to be a beefy beat stick that punished the player who did finally wipe the board.

A thing to remember is that these cards live in the command zone. They’re open information. If you see a player dropping cheap creatures (and god, white has such a stuffed lineup under two mana) and see this in their command zone, you’re going to need to find spot removal for her and a board wipe you can cast immediately afterwards, because you need both.

That’s her job. She’s a geddon in the command zone, a threat that demands two answers. 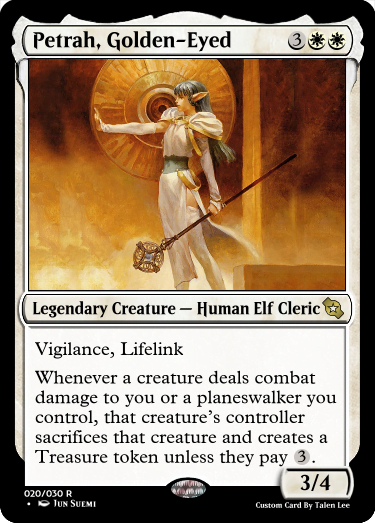 Who Wants It: mono-white durdlenaut.

I hate commander decks that want to durdle around, but some people really like hiding behind these kind of tax effects like Ghostly Prison. If that’s the option, then the trick becomes designing a commander whose abilities enable a strategy and create a narrative.

In this case – a reference to Onslaught dud rare ‘Aurification’ – Petrah is meant to be a half-elf from some ‘city of gold’ style site where the gold comes from turning people into it, possibly as a defensive measure. Hence ‘golden eyed’. You can countermand this effect, but you need to spend magic to do it, to protect your creatures from turning into gold and being lost on the way back. 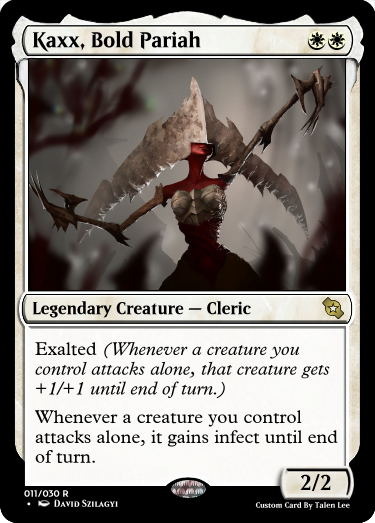 Who Wants It: A mono-white evasive offense deck, possibly a deck with equipment and pump.

Infect doesn’t really work in Commander unless it’s winning the game all in one big hit – some players hate how vulnerable infect makes them feel, but that’s something to talk to other players about. This card is meant to give white a means to make its small aggressive creatures dangerous to a large group of players, while feeling like an infect deck. You know, you put out a threat then you do what you can to protect it and the cards supporting it. 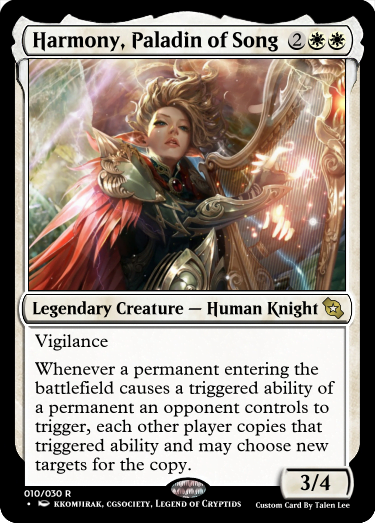 Who Wants It: This is a kind of mono-white fun police value town card.

If your group is full of people who love to stack up value town creatures, this is meant to put a stop to it while also making you the player at the table they want to get rid of the least. This card makes everyone benefit from triggered abilities of your opponents’ stuff.

Not yours, you can still run your ETB critters.

Weird detail: you can’t use this to win off an opponent’s protean hulk, because I can’t find a mono-white protean hulk line. Weird, huh? 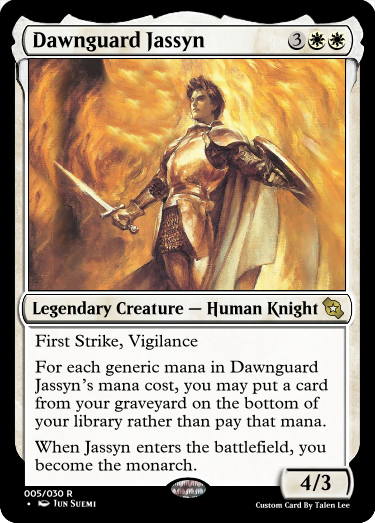 Who Wants It: It’s a great big combat idiot that can keep your deck refreshed.

This was the card I started with and I thought that it was mostly interesting because it gives white two things people say it needs, recurrently and consistently and easily, but people got really stupidly pissy about the wording, because, I dunno, the actual rules text in the comprehensive rulebook doesn’t work or something.

It’s a mono-white card draw engine that comes down more and more cheaply the more cards you’re using up, benefits from using cantrips and lets you trade one-for-one as you build up your board. 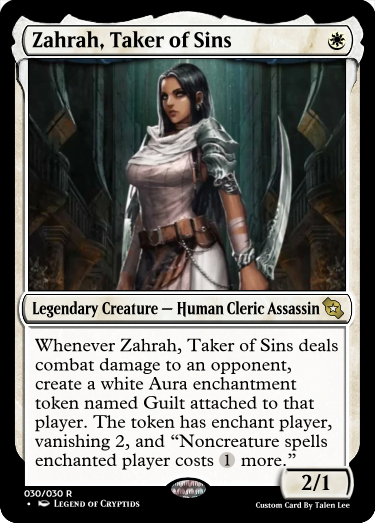 Who Wants It: People whose playgroups really, really want to storm out on turn three.

This was a lot more meanignful before they banned Flash. I wanted to present a kind of mono-white stack interaction that didn’t involve breaking the colour pie and could meaningfully keep spell-slinger players who didn’t want to commit to the board on the backfoot while you developed the rest of your own strategy. She’s basically a kind of sphere of resistence that picks fights and is most effective in a world where nobody blocks.

The idea behind Zahrah was that she was an assassin who could kill your motivation to fight, and therefore she was attacking ideas. 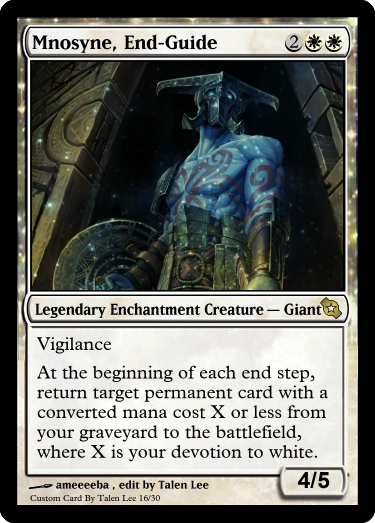 Who Wants It: Welcome to value town.

This design can get you a lot of lands if you have fetchlands, which isn’t a thing I honestly care about because fetchlands are bad, but the purpose behind him is meant to be a board expander that can help you rebuild after board wipes, which again, I see as common in commander. 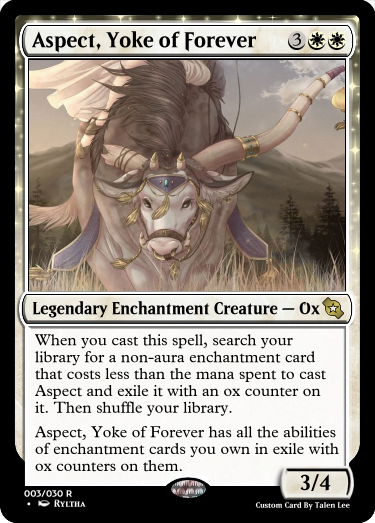 Who Wants It: Sort of voltronny decks.

I like the idea of this card as a kind of combat combo tutor, an enlightened tutor deck commander that can either be a key piece you need or can on its own just get you two or more pieces and jam them onto the board in the same big antlered body.

I don’t have any favourite combos here, because Aspect is deliberately expensive enough that you shouldn’t be expecting to stick three enchantments together. 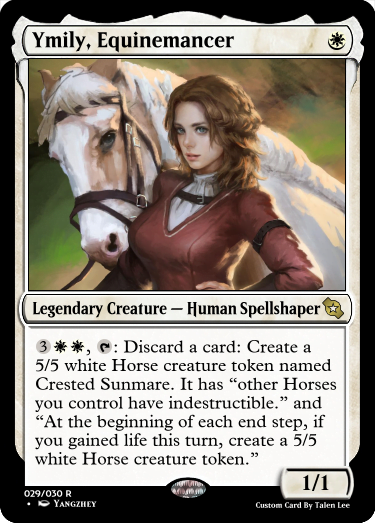 Who Wants It: People who want Crested Sunmare as a commander, but don’t want to just jam ‘legendary’ on front of it.

This started as a joke because someone saw Shahen and was upset her name wasn’t about horses. 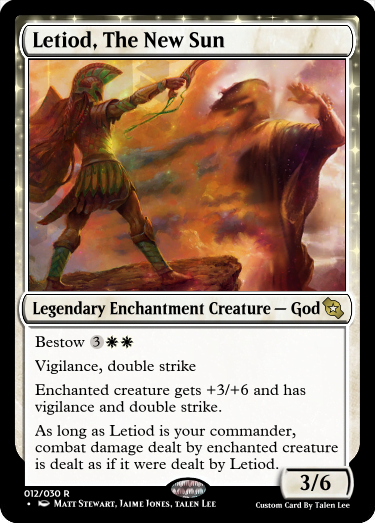 Who wants it: Mono-white voltron decks.

I can’t find any white cards cheaper than it that become one-shot killers with this (you need 8 power base), but I’d be happy to do so. There’s nothing wrong with having a shotgun in your back pocket.

Lore wise, what I envision for this card is a new sun god being the subject of belief on Theros – kind of a god forming out of people’s hopes for a Sun god who isn’t a total dick. 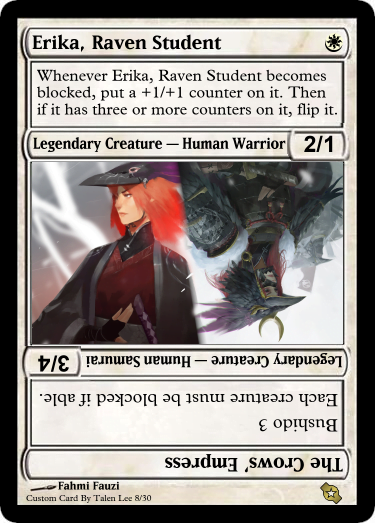 Who Wants It: people extremely nostalgic for Kamigawa.

It’s not a great card, and flip cards can’t do much that double faced cards can’t? But I found the art with similar themes from Fahmi Fauzi and I wanted to weave them together. There’s some stuff that I wish didn’t have to work the way it does; really, Erika should flip at the beginning of combat, before she’s blocked, so that the Crows’ Empress can get her bushido trigger.

I also wanted to play with rulesetting and combat coercion – making people get involved in combat so white gets to prove itself the best in that front. 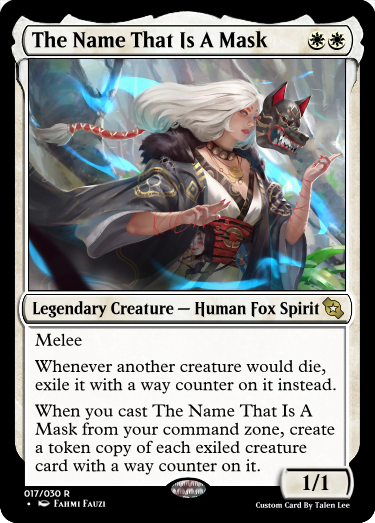 Who Wants It: A deck that wants wraths, hatebears, and value threats.

She’s a Samurai of the Pale Curtain that wants to go broad, with attacking a lot of people at once. She wants you to spread out, so she encourages your opponents to build up a board, so your – or their – wrath – can be a problem. People want to get rid of her because the wraths happen, because she makes the wraths debilitating but then they’re spending spot removal on a card that you can probably replay two or three times a game, and you can even use her to re-buy value cards of your own when they do by sacrificing them in response.

I love this card, I’m surprised people didn’t react better to it. 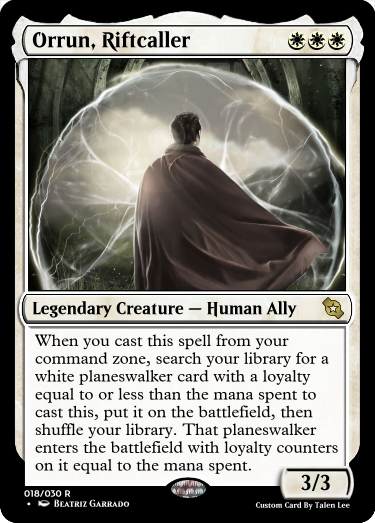 Who Wants It: Mono-white superfriends decks, so mostly, Chad decks.

I’m not wild about how this design wound up. The idea is that he’s a creature who brings in a planeswalker by calling them across the planes, but it’s so wordy and the idea of bringing in planeswalkers with lots of counters is kinda neat but also just brings in all those commander planeswalker problems.

It’s not a design that appeals to me, though I like how it works.

Someone complained about the card being extremely high value, which…

If the problem is white is weak in commander, you’re not going to fix that by making white cards that are weaker than the ones we have now. 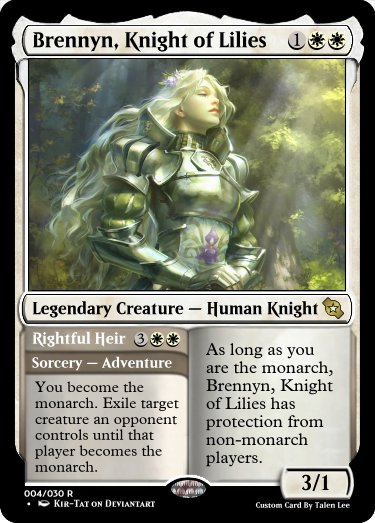 Who Wants It: Anyone good and virtuous

Hahey, it’s a True-Name Nemesis bolted to a Palace Jailer and she was unsurprisingly popular. Strangely, people didn’t complain about her power, but there was an amusing bit of complaining about how she and the other designs didn’t do more with the monarch mechanics, as if I was about to change the way the excellent monarch mechanic worked out of some sheer desire for novelty.

Of this batch, Brennyn is the most popular, with Shahen being the least popular. Do let me know if you like or dislike any of them, I’m very interested to see what kinds of deck you’d brew with them!