When I made Chin Music, there were three basic things coming together. First, the idea was to try and make a game that wanted to be played quickly, but wasn’t real time. Real time rules can be challenging to make work, but the purpose of real-time play is usually some degree of tension. The idea that came together was of a game that evoked a fight, and which I could produce quickly and easily without calling on an artist.

Now, I want to make it clear if you think I’m rubbishing Chin Music. I love Chin Music. It’s one of my favourite games I’ve made. I like how it looks and I like how it plays. But there are two Chin Musics – a beta model that was printed, and a proper version that you can buy now. 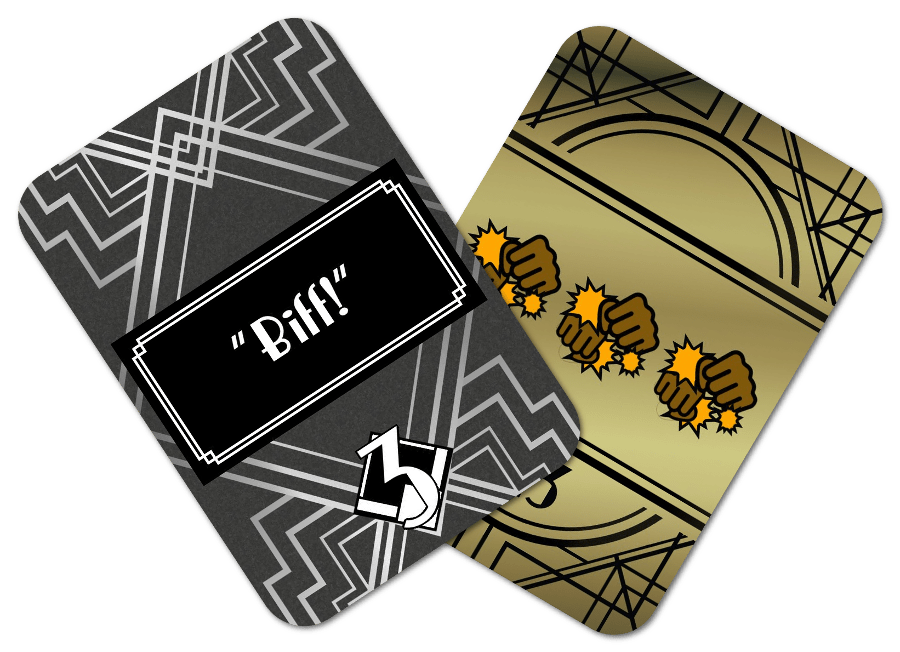 The basic mechanic of Chin Music is a bit like Snap. You lay down cards with sound effects on them, and list the sound effects in a row of the stack so far. Then, when you messed up, players flipped the stack over, checked how powerful the gang of hooligans outside you’d antagonised, and then you won or lost points based on that. Players could see the back of other players’ cards, so you’d know generally how dangerous the gang would be. The real-time aspect of the game is that the longer you take on your turn, the harder it gets to remember the stack of cards. You want to pass the turn as fast as possible just as a function of memory.

Here’s the problem: That second mechanic sucks for a game that wants to move fast, and it jerks the whole game to a halt when you need to check it. The mechanic that replaced it was much simpler: When you mess up, another player can call you out for it, and if you did mess up, you shuffle those cards and put them into your own deck. This meant that there needed to be a few more cards, and that meant the card backs needed to be cleaned up, and then since the deck got a bit bigger, I could put the game into a cardboard tuckbox (technology we didn’t really embrace fully until 2018). Overall, this means that early versions of Chin Music are, while perfectly functional, really not as good as the final versions of it, and that bums me out.

But I still put the first version up for sale, in a rush, because I didn’t want to miss making ‘a game a month.’ This was a bad decision, because if I’d postponed it a week or two, nobody would have really noticed. I’d have gotten the first version, found the problem, been willing to address it then, and just delayed the game.

This is one of the ways the printing time kicked me in the butt. My first prototypes of this game were made with playing cards and I found the awkwardness of the scoring system was – in my mind – tied more to my handwriting and the cheapness of the prototype than the actual problem in the game.

I wanted to release a game a month, and since I was doing it without a plan or a contingency, and doing it without clearly defined boundaries of what did or did not count as a release, or any way to recover from mistakes, I now have stock of a kinda-bad version of a game I really like. Let that be a lesson for you: If you’re going to do a project like mine, give yourself defined limits and boundaries, and ways to recognise and handle failure.