The Defenders is an adequate average of the sum of its parts. At its best it is Luke Cage’s snappy dialogue and Daredevil’s fight choreography in tight, threatening situations with an appreciation of highlight moments, and at its worst, it has Jessica Jones and Danny Rand in it.

There really isn’t anything I have to contribute to this conversation that’s particularly new. The lighting theme is so obvious that I noticed it, and that’s probably why literally every single outlet has mentioned it. Nonetheless, The Defenders is a fun little third of a series unfortunately wedged in the space normally filled by half a series, with fun introductions and development, an overarching plot that’s extremely dull and villains that accidentally get less interesting the more of the series you see.

There’s also this weird thing where basically everyone gets to spend time owning Danny, which is fun, but the crucial follow-through of fixing Danny as a character doesn’t happen. The Immortal Iron Fist continues to propogate his awful theme that Being Angry Is How You Be Powerful, because that’s really what a narrative about a billionaire with no moral oversight needs, reinforcing that he, as a character can do what he wants if he wants it enough and being frustrated at being refused is legitimate grounding to get violent. Still, I’ve written enough about the Immoral Iron Fist (zing!).

Sigourney Weaver is great and her scenes are also great at projecting this fascinating immortal standing on the edge of death and realising that yes, there is an end. It also feels like a good crowning element to the four narratives feeding into this one that there’s one supervillain at the head of the tree represented by Bakuto, Madame Gao and oh goodness nobody cares, but it’s not like it’s used that way. Instead of being a dragon with these powerful entities at her beck and call, leading to cool setpieces and chaining sequences of fights or mix-up conflicts, it’s much more political bickering that’s given way too much focus. You see what could have been a pretty good structure and there wasn’t anything done with it. This is meant to be the end point of the narrative, the thing the story builds up to, and … it’s just boring.

This series tries to conclude with an immortal ninja death cult warring with superheroes amongst the bones of long-dead dragons and even kills a character off and it is still somehow boring.

Despite this though I do think of the series really expertly threaded together some of the character dynamics. I like Jessica Jones and Matt Murdock sniping at one another. Luke completely no-selling Danny, who still talks like a little boy. Matt and Danny clashing and Danny finding out that he’s –  Actually hang on, why is it Matt can kick Danny’s ass? Don’t get me wrong, it was satisfying, but just how garbage is this Immortal Iron Fist?

The opening episodes of Defenders are nonetheless pretty good, because you get to see things like Danny failing to hurt Luke, or their version of the Hallway Fight. Also, Stick dies, and that might mean that we don’t have to deal with Stick any more, and he does it while demonstrating that he’s just the most awful of people, so that’d be great? 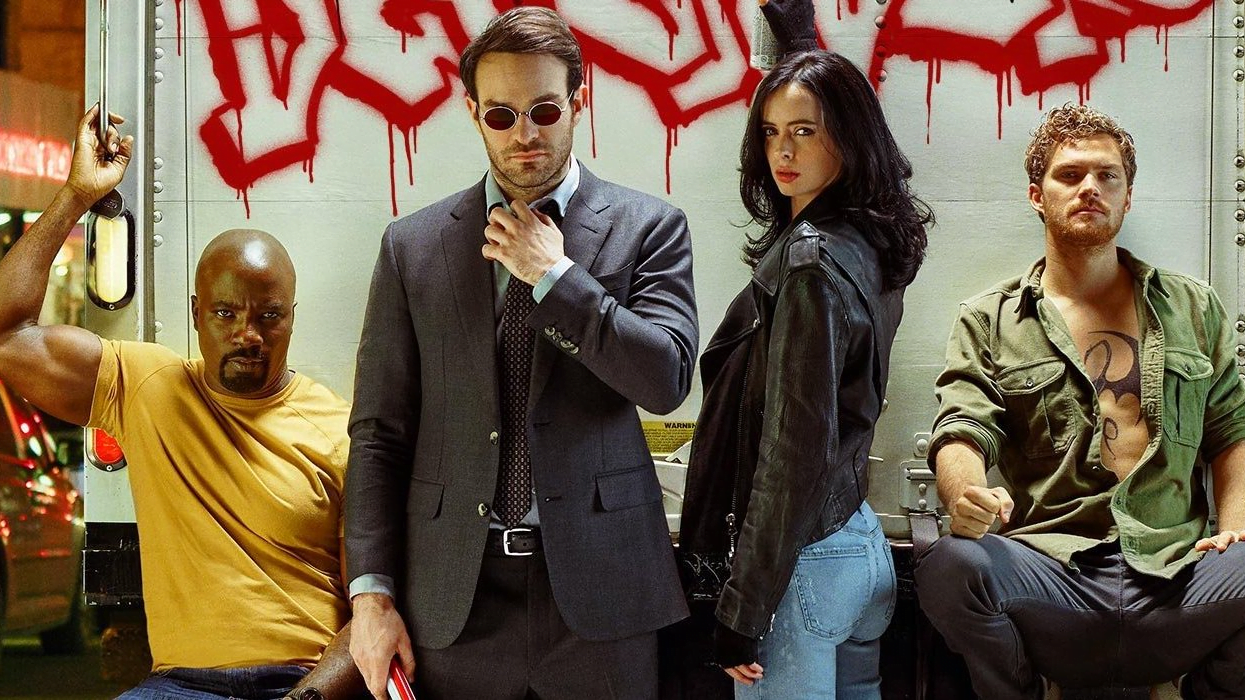 That isn’t to say it’s all Pretty Much Okay If Not Actually Very Necessary. There is stuff in this series that’s actively worse than the previous three series in this I watched, mostly around the character of Jessica Jones.

Boy this isn’t going to be comfortable.

I didn’t watch Jessica Jones after episode one. I didn’t want to. I had a previous grounding with the character from the comics, I knew the story they were going to tell, so far so who cares. I actually was hoping Defenders would project to me a character who I could appreciate more and give me a footing to go back and see if there was more to the series to go and watch it. This is very much not the case. Given that people I know love this series and expected me to love it and she’s the only woman in the series who gets meaningful dialogue it feels pretty rough that I look at her and go: You. You, you are awful and making this worse.

Jessica is to me, a lowlight in a series that’s got Danny Rand in it, which is kind of impressive. It’s not her, not the idea of her, per se, but she’s both a character I dislike in the story, and she’s also demonstrated really badly.

Just on an execution front, Jessica Jones is super strong. Super strong is a great power to show off in a TV series because you don’t need to do a lot to make it look good. For example, you can have a character punch through a wall or pick up something everyone treats as heavy, or getting stunt people to go flying when they’re punched. These are things this series does not do, at all, with Jessica. She gets three setpiece moments of being super strong, but that’s really all – and when she’s fighting people, it’s easy to forget the super strength because Luke Cage makes such a show of it by comparison.

That’s not all, though, because Jessica Jones also brings with herself a bag full of tropes I can’t stand! She doesn’t like the word ‘superhero!’ She doesn’t want to be here! She is the character in the group who inherently dismisses the idea of the group! She’s a superpowered badass who finds the idea of superpowered badassery ridicuous! She’s too cool for everything around her, mocks superhero costumes, and complains about the idea of being in any way engaged with the whole thing she’s doing.

So she doesn’t look or act in a way that is cool, and she spends her time projecting an attitude that she’s too cool for this, and I have no time for superheroes who are above the idea of being superheroes.