You think because I’m doing Pride Month I’m going to shut up about Dungeons & Dragons and my own setting? Of course not. Let’s talk about putting queerness in a setting, some ways to do it and some ways I don’t want to do it.

Specifically, one thing I don’t want to do in my setting is make queerness something’s property. I’ve talked about how sometimes players make Tieflings into queer metaphors and why I don’t like that, but understand in this case I’m not talking about this as a player. If your tieflings or orcs are The Gays to you, then you go on with your bad self, I ain’t here to tell you nothing. But as a world builder, as someone constructing this setting that will be handed to maybe people who are one of the less cool types of queer, or maybe even not very queer.

What that means is that I want to instead make sure that queerness is shot through this universe, both visibly and invisibly. This can be a tiny bit tricky, when the bulk of my worldbuilding isn’t about reflecting individual relationships, but is instead about talking about cultures and spaces. We bring our own baggage, and unless my setting makes it clear it’s queer friendly up at the forefront, it’s going to be easy for people to accidentally invisible that.

I also don’t want to replicate existing power biases because that’s boring. I don’t really have any meaningful interest in making a homophobic culture so I can point out the contrast of non-homophobic people. I have dragons in this setting, and krakens, and cults of the apocalypse to deal with, why wouldn’t I want to do that instead? I don’t need to add homophobia, transphobia or replicated abuse cycles of those specific marginalisation to my world, so why bother?

I don’t mind the idea of there being some fascist cult or group that thinks that – after all, fascists are always going to opt for this kind of marginalisation, and fascists make wonderful villains because you don’t have to feel bad about kicking their faces in. Those are going to be part of organisations or specific motivations for villains, rather than it being actually part of the setting at large though.

The challenge that then flows is how I represent sex, gender, disability, so that it’s known and clear in-setting that there is queerness around without necessarily getting bogged down into presenting people with extremely specific characters.

Well, I’d normally recommend for other designers that are more focused on new design spaces, you should always be trying to put these things forwards in characters and how they relate, like sample characters.

In my case, with my work? I’m just going to be blunt about it. Way I feel, I’m just going to put a big ole box at the start of the book saying ‘Hey, in this setting, oppression like that isn’t common and would be seen as shocking.’

There is another space where there are characters big enough to make the foundation point for showing values of the setting, and that can include queerness.

Gods are a useful moral framework for your whole setting; if you have a god, for example, of slavery, that means you’re going to want your players to think about or talk about their relationship to slavery. There will  be temples of slavery, or cults of slavery, or spellcasters that draw some power from slavery.

Now, an obvious conclusion there is hey, why not make a god of queerness? That runs into my aforementioned problem of making queerness into someone’s property. What’s more, that means that one god gets to represent queerness, as opposed to queerness being a thing that’s just… everywhere. 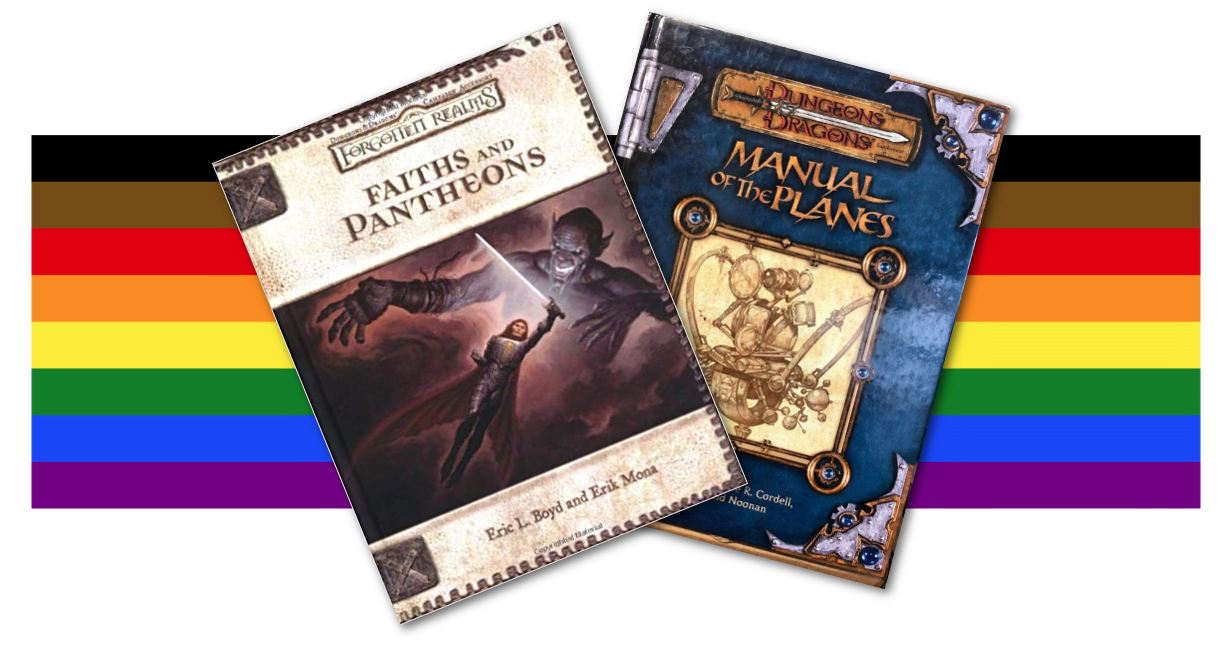 Now, Cobrin’Seil’s pantheon as it is isn’t great but it does have a few ideas I like, mostly in the form of specific personalities and names. One thing I did like was the way that I made a lot of the evil gods poorly-sustained as cultural elements, but definitely viable as elements across cultures; a god of betrayal isn’t going to make a good society, but they’re going to have wellsprings of connection across many other societies made by people who are willing to cooperate.

Making gods for a setting is tricky, especially if you go from the D&D established idea that ‘stuff exists as big moral forces in the universe, and the gods are just made of that force.’ That creates the idea that good and evil are two equal forces warring against one another, and that tends to get connected to ideas like the equality of forces and there being some kind of greater moral ground in the middle. I don’t like that.

What I’m working for now is the idea that these gods represent a sort of coagulated avatar state for these forces; that enough evil exists that evil gods come into being, then those evil gods can kind of encourage the things that bring them about. Irrigation, kinda thing. There are some ideas like Exalted’s idea of fetich souls that I might want to include, but for now, I’m using the idea that gods are central points for leylines of belief magic. They’re meant to come across as more like Thor and Hela in Thor: Ragnorok than they are to come across as omnipotent forces that hover over players and exude knowing wisdom. They’re limited and potentially, stupid. They’re going to be people that mostly work through their life with a very important hammer, and they look for their nails.

One thing about the moral framework of the setting is that I think of ‘humanity’ as described panracially, as being more good-aligned. The less capable you are of engaging with humanity in terms of ‘people existing is good’ and ‘people hurting is bad’ as even basic elements of your framework, the less ‘human’ you are as a god. A god of luck isn’t going to be a person or have a personality as much as it’s going to be a thing.

What that means is that my pantheon is probably going to feature more queerness in gods that I think of as worth respecting and less in the gods that aren’t, but that’s only because the gods that are closer to that line are the ones more likely to reflect actual people (and therefore be more generally queer more generaly often). Gods are going to be people who are About A Thing, and the more humane they are, the more likely they are to be ‘good’ aligned.’ As a direct moral consideration, this means that the more evil you are, the more likely you are to not have a capacity for empathy and kindness, which means that evil gods are more likely to be less queer, just because they’re less likely to be recognisable as people.

I’m looking at gods as almost like Marvel’s Thor – creatures that are connected to a powerful, primal force, and a useful metaphor for that, but they don’t own it, and they don’t have an absolute control over it. You’re not going to be able to burn a god of fire, but that doesn’t mean they can control all your fire powers.