Gunna talk about trauma! Jump away if you’d like!

There’s this anecdote Russell Howard gives of his mother, who is short, joining a Club For Short People. They met once and noticed that yes, they were all short, and then never went again, because they had nothing in common. Points of commonality is very important in friendships. This little video here – around 49 seconds – covers the basics of the things that go into making friends. 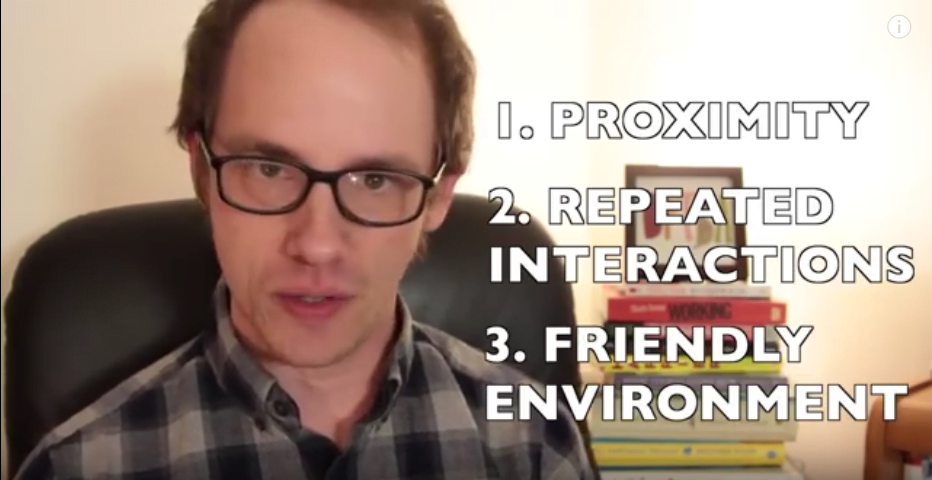 Now, I’m going to put this out there: Shared Trauma is not really a great basis of a friendship. It sort of busts open that 3rd entry.

I know a lot of people who have experienced some pretty awful stuff and it’s damaged their ability to make friends. Since friends have positive knock-on effects to your psychological health, this absence tends to make them even more withdrawn, which just kind of reiterates and you get that nasty death spiral effect. Note the video cites rumination, the psychological problem where you basically sit and worry about the same things over and over in a loop. Yeah. Basically having friends is good! And part of having friends is being comfortable and being able to trust them to be there, and respect when they can’t.

Outlined in this video, though, is this challenge as it’s experienced by shy or confused people, rather than people who necessarily have experienced trauma. That’s when things get a bit harder, because when you’ve had those experiences you’ll often shape your emotional network around it. There are quite a few spaces people have that are all their social connections and they are all about the shared emotional trauma. They literally come together because they have a shared traumatic experience and then… that’s it.

That’s a fine basis to make acquaintances and indeed, a support group: But if this is how you go about making friends, you are going to have a really hard time of it. You might not have anything in common beyond that. You might respond to your trauma in totally different ways. You might stress each other out because you both remind each other of what you’ve been through. One person may endlessly joke about a terrible experience because that gives them control over it, which can be incredibly triggering to a person who instead chooses to never talk about it.

Basically, try and find other things to do, like, go bowling or something. Try to build other friend connections as well. Don’t limit yourself to These Are The Only People Who Understand Me. And don’t ever assume because you and another person have shared trauma, you two should ‘have each other’s back’ or ‘should understand one another.’ Trauma is a big, messy thing and one of the things I’ve learned is nobody seems to have the same specific reactions to any of it.

Of course, I do recognise there’s a good reason to fall into this pattern. It’s because in some groups, people outside that group may not respect the trauma or experiences or your identity at all. That does suck. It really does. Just don’t let that leave you feeling you have to hold yourself to a ‘friendship’ that hurts you, or them.

This is on my mind after seeing a friend – yet again – fret about the idea of making friends outside a social trauma group. Struggling with how the people from within that group have abandoned them in the past, but people outside it have not. This is not because anyone involved is bad, by the way: This is because trauma drains you emotionally.

The Other doesn’t have to be The Enemy. You can have friends who aren’t necessarily the same as you. And I need to state it here, because I’m afraid I’ll be seen as trying to suggest you should make friends with bad people who hate you, but I don’t mean you need to accept people treating you badly. I’m saying that there are people outside of your group who are humans and have common interests and maybe you can be friends with them, and that’s okay. And if you can’t, that’s also okay – friendships are very specific, very artisinal things.

I literally know nobody who has gone through the kind of experience I did. Not even my sister. If I needed that commonality to make friends, I wouldn’t have any friends.