Lovecraft, if you’re not aware, died poor. He died of cancer in his 40s, mostly destitute, and his work was forgotten until a significant period after he died. Even then he was sort of an academic interest that fed into the interests of other writers rather than the force of cultural nature he is now that he’s part of the public domain. One of the things he attributed this to, in his later days, was that he didn’t have the confidence or courage to promote his own work, and when he did, he didn’t do enough. His obscurity, he felt, was not tied to the quality of his work, but his ability to advertise it. 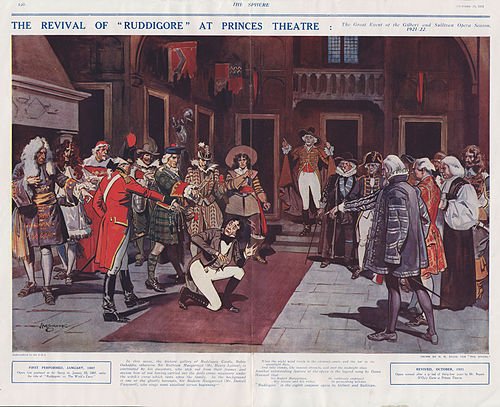 Lovecraft was born in 1890. Three years before he was born there was the first performance of Ruddigore. Ruddigore is an operetta I like a lot, and one of the two best songs in it is this one:

The lyrics, in case you aren’t versed, as I, feature this chorus:

If you wish in the world to advance,
Your merits you’re bound to enhance,
You must stir it and stump it,
And blow your own trumpet,
Or, trust me, you haven’t a chance!

These words echo to me a lot, in my more horrified moments. One of the problems is that I already feel like I promote myself too much. I feel like I never shut up about my stuff, that I presume I can reference my games to people, and when I’m put on the spot and shown that I can’t, it reminds me that for all I feel I talk about this, I either don’t talk about them enough, or, more damningly…

I do, and nobody cares.

Is it that I’m bad at self promoting, or is it that my promotion isn’t going to endure because what I do isn’t good enough? I worry about this a lot. I wonder about it when I learn that there’s something I have in common with Lovecraft… staring down the barrel of an irrelevant life because I wasn’t able to make myself memorable in the minds of the people around me.

Shame about the racism, though.

The full lyrics, by the way, of each verse:

My boy, you may take it from me,
That of all the afflictions accurst
With which a man’s saddled
And hampered and addled,
A diffident nature’s the worst.
Though clever as clever can be –
A Crichton of early romance –
You must stir it and stump it,
And blow your own trumpet,
Or, trust me, you haven’t a chance!

Now take, for example, my case:
I’ve a bright intellectual brain –
In all London city There’s no one so witty –
I’ve thought so again and again.
I’ve a highly intelligent face –
My features cannot be denied –
But, whatever I try, sir, I fail in – and why, sir?
I’m modesty personified!

As a poet, I’m tender and quaint –
I’ve passion and fervour and grace –
From Ovid and Horace To Swinburne and Morris,
They all of them take a back place.
Then I sing and I play and I paint:
Though none are accomplished as I,
To say so were treason:
You ask me the reason?
I’m diffident, modest, and shy!