Presented here is a somewhat formalised text of what I told my students in my last session this year, about the meme known as Loss.jpg, and why I love it so much.

Our story here starts in 2002, with the first posting of a webcomic called Ctrl+Alt+Delete, a four-panel gamer comic of no significance and no importance but that still benefitted from the explosion of audiences and ways to monetise them. It was a gag-a-day kind of comic, generally uninspired and extremely unworthy of prolonged analysis, focusing the life of a main character called Ethan, a sort of stereotypical gamer idiot who could only relate to the world through videogames.

In 2008, Ctrl-Alt-Delete started a plot arc which revolved around Ethan having a girlfriend, who then got pregnant, and Ethan considering how he was going to handle becoming a father. This was extremely forgettable and mostly served to highlight how ill-equipped to become a father Ethan was, since we are talking about a dude who wondered aloud why he couldn’t use a cardboard box to sneak away from bills like Solid Snake. It was not in any way an inherently bad story, except in the way that this comic did nothing but bad stories. It was a very successful, very mediocre story, after all.

Then on July the second, 2008, this gag-a-day webcomic dropped a single comic that would become infamous. 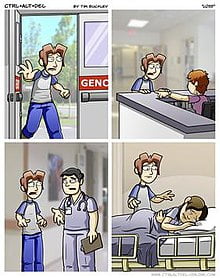 This four panel comic depicts, wordlessly, the day Ethan, who up to this point has been asking questions like ‘why isn’t life like Skyrim’ and ‘what if I make glasses out of pineapples,’ discovering his girlfriend has experienced a miscarriage. It is on its own not particularly meaningfully bad art, forgettable in most regards in the internet full of weak attempts at melodrama. There was also a blog post about it, where the author attempted to speak deeply on the subject but instead came across as a self-aggrandising asshole. This also didn’t gel with the comic that both before and after, made lots of abortion and ‘unborn baby’ style jokes. So, not a good look.

This would be forgettable for the most part, but Loss was such a silly and self-important move that it took off, with numerous other webcomics making fun of it, and then making fun of making fun of it and what ensued was the comic ascending into meme status. At first it was webcomics referencing the comic by the events in it. Then it became mocking the comic by its structure. Then, in spaces like SomethingAwful it became a sort of fanart game, of people endlessly making mocking exchanges based on the meme.

There’s an interesting story there about whether or not Loss deserved more or less reviling than any other given bad webcomic, but we can’t really have it because hypotheticals about how Lil gamers or Fanboys Online might have made more or more deserving missteps. But it caught fire, and there was an arc of making fun of it as criticism, to then making fun of it because people were making fun of it, then steadily, it became a meme.

I don’t have a lot of direct animosity for Control Alt Delete, despite the tone of this piece rightfully calling it mediocre dreck by a hackish tool. Still, it wasn’t personal for me. I was never part of the massive threads of people dunking on him, and I don’t remember ever having a powerful interest in the comic beyond that. It’s definitely bad, but it’s bad in a lot of ways that a lot of other things were and the only reason it deserved singling out was because it was successful enough that its creator got to do this bland, generic comic as a full-time job, during a time when that success came from a very direct audience conversion rate, when there were a lot of better comics trying to hit that same alchemy of luck and engagement that could let them create their stories too. In a lot of ways, Loss is a meme that owes its success to a lot of spite from people talented at art with their own platforms doing a pretty extensive round of dogpiling. It’s almost possible to consider it tragic and paint Buckley as a figure of pathos in this, until you remember what an utter dinghole he has been about it.

The comic holds no special place in my heart, but the meme, that does.

As Loss got repeated and parodied more and more it didn’t just become comics about Loss, it became photos re-enacting it, screenshots of maps focusing on it, abstract photographic art of it, the pattern of it presented in other games, or other mediums, and eventually, it became not just about using Loss, but about the joke of continually reusing Loss.

It’s that I like the constraints that Loss asks of me.

What can I do with it that’s funny, that’s clever, that’s aesthetically interesting? Loss has been used for so many things, and it can be simplified down to such an abstract engine of meaning. You can do Loss with a few lines – I, II, II, L – but you have to know what it is to look for it. What’s more it’s something that’s alien enough that if you see the pattern around you, you’ll probably work it out, if you know the pattern already. There’s a playfulness in hiding Loss (and you’ll see how playful I get with it later this month).

What’s most important though is that Loss is a great example of a meme that changes you once you know it. It is in a way, a mind virus, a little bit of mental poison, that you will see every place it’s been hidden around you, and now you alllll have it.