The first character you’re introduced to, the first one who’s fleshed out to any extent in Leverage is Nate Ford. We learn in the opening few minutes of the scene with him that Nate is probably an alcoholic, very good at a particularly obscure kind of job that you may have heard of but also haven’t really got a good handle on, lost his kid to an insurance agency’s decisions and is also a bit of a dick.

This is part of how the series works, of course; it’s very good at dense characterisation, something it can mainly achieve by making characters very broad, tropey archetypes. Good people in Leverage are often glowingly good, bad people are often cartoonishly bad; it’s rarely handled in a way that makes things subtle after either an introduction or a twist. You’ll see a few seconds of a character in which the series very cleanly tells you whether or not you’re dealing with an asshole.

Nate is not an asshole, but Nate is a Troubled Sad Dad. I’ve grown a lot on this archetype in recent years, particularly because I realise how well this speaks to the people to whom it matters: Not the waxing, mawkish perspective of the people who fantasise about it, but the burden of struggling underneath that weight, of the general, permeating sadness – or worse, the fear of ever invoking that sadness. Nate is a guy who has been through a lot, and his work is not the refuge from it he wanted it to be. 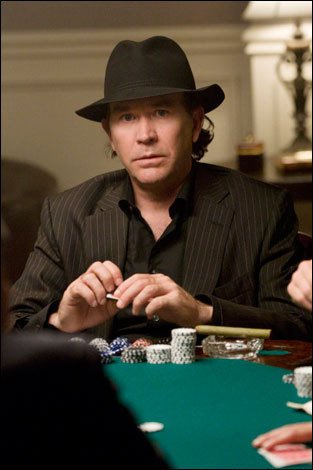 I didn’t know Tim Hutton before Leverage, which is funny, really. I’m told he’s one of those enduring character actors, and that’s something you need to get used to when you’re talking about Leverage – it’s a series full of characters who are being played by people normally used to taking second or third string in a series, someone who gets wheeled on, play a stock part, and then exit. In Tim Hutton’s case, the main role he plays when he plays Nate is, in-series, a colossal asshole.

Nate, in-universe, is a con artist who needs to be in the middle of a con to keep track of all the parts that are moving. He needs information and access, he needs some form of control, befitting his position in the role of the Mastermind. This means he normally plays a character in the cons the crew run that translates best to… well, the person you want to backstab. The person who offers you opportunity but not affection. The person who, in some way or another, you want out of your life.

He plays a dick.

Look back on the history of Leverage sometime. Literally the only time Nate isn’t being a total asshole in a character is when he’s being oily and unctuous. And then he’s also kind of being an asshole!

The story of Leverage tends to follow a series of beats, where each season is defined by the character of Nate’s personal arc; first his refusal to get close to the team, then the recognition he has, accepting his self-destruction, repairing himself. This means the moments Nate really shines tend to be the episodes that pull some part of his past into focus, and those tend to be at the start and end of each season.

Despite that, my favourite Nate moment is in The Studio Job, episode 34. Nate is isolated from the group, left with two guards who are there to work him over – and when we come back to him, he’s sitting there, in his chair with two unconscious guards. The only explanation we’re left is from Nate –

“These two guys got in a fight.”