When you’re introduced to Parker in Leverage it’s with the unfortunate offhanded phrase that she’s ten pounds of crazy in a five pound bag. To be fair she’s also throwing herself off a building.

Parker is a thief, and our introductory shot of her is, in sequence, being shown in an abusive household, having her toys taken away from her, a crying mother, and being told, as a challenge, that she needs to be ‘a better thief.’ Then it ends with her walking out of her foster home, with the toy, blowing up the home.

This is one tiny problem with the earlier parts of Leverage, though really, the first episode. They hadn’t found their stride yet, they hadn’t quite perfectly nailed down the dynamic. The early entries came with a lot more shouting tension between the characters, but the start of Parker’s character was there. She was awkward, she had outbursts at people when they confused her, and crucially, the line, “I don’t like things, I like money.”

Parker liked money, because money made sense. More money was better than less money, and that meant that money was, literally, a way to keep score. She cared about the experiences of theft, but not the value of the things money could do for her. That crucial core of the character, that she doesn’t think the same way the rest of us, was there, and was fleshed out as the series went.

Parker is a character we learn a lot about, mostly because the assumptions about how she is don’t work. You needed to explain why she became, which means there’s rich fodder in showing her stories as connected to greater events, to the inevitable connection to her father figure, to how she learns to care about greater groups of people than just herself, or her family, building relationships within the group. 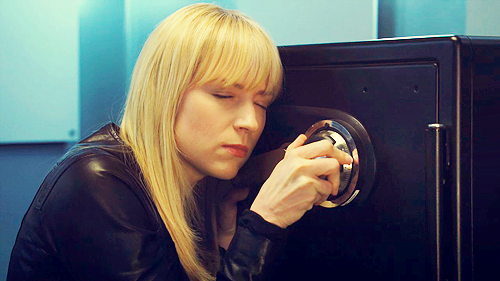 One of the devices about Parker that I really love, and which reminds me of of all things the Tales of Earthsea books is that because of her neuroatypicality and lack of social context, Parker can be both an eye-level character, who needs things explained to her on a very rudimentary level, and a high-level character who is the one doing the explaining.

Good storytelling in a short amount of time is hard, and Leverage makes it work by doing that storytelling fast. The story doesn’t take breaks to explain to you the large, elaborate history of con artistry that they definitely researched, but instead gives you a short, quick exchange that sounds like characters know what they’re doing (‘Cherry Pie, but with Life Cards’). Parker is responsible for a handful of these – she rattles off details about security systems, about heights and tensile strength and physical athletic limitations of human bodies, and she does so very comfortably.

The other thing Parker does, excellently, is show an emotional vulnerability and obviousness that the other characters resist. Elliot is not going to call the rest of the crew his family: He’s too damaged, too hurt to do that. Hardison can’t bring himself to do it, hepped up on all his personal social values and his ideas of what he can afford to show about himself. And then there’s Sophie and Nate, who are for lack of a better term, the parents of the group, and they don’t show their emotional state so readily.

But Parker: Parker can. Parker doesn’t ‘understand her emotions’ the way the others do, she doesn’t consider that she shouldn’t be so obvious about it.

Parker is a wonderful character, and despite her being neuroatypical, despite the characters early reference to her as being ‘crazy,’ by the story’s development it becomes clear that they trust Parker, and nobody thinks Parker needs to be fixed or solved. Parker’s behaviour is Parkery, and it’s not a sign of the flaw or wrongness in her.