With the dawn of 2020, the first wave of Millenials, born in 1980, have to take a break from killing the Fabric Softener industry and deal with now being in their 40s and starting the chunk of time that gets called ‘middle age,’ and with that comes the obligatory desire to complain about kids these days. I’m not there yet, but I’m getting there.

I have young niblings, and with their presence in my life has come a variety of engagement with the things that the youths like. They’re pretty lucid kids, they like a lot of things and thanks to not being a boring asshole I get to learn about their latest interests and obssessions and fascinations and I have come to have an opinion about some of the things they like, and I tend to feel, when I look at their stuff, a bit depressed. 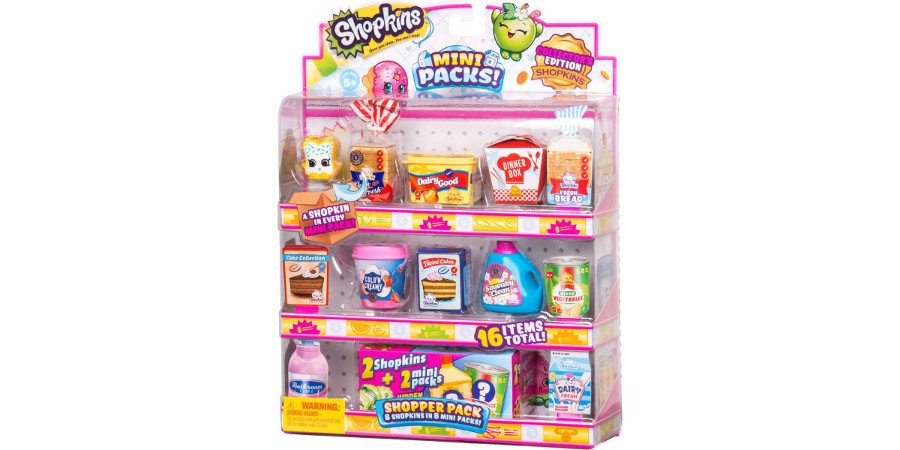 Now, let me be clear, ahead of time, I am not saying that my upbringing had great toys and they have bad ones. Nor am I about to say they shouldn’t like or want the things they want and have. That’s silly. They’re kids, and I think I can do better for them by letting them enjoy the things around them that they’re interested in then try and impose on them my childhood, especially given how messed up that is. That’s silly.

What I’m mad about is the products themselves. What bothers me about them is the stuff they want to be. Particularly, there are a lot of toys that seem to be toys about having all the toys, particularly the absolutely nihilistic Shopkins. Shopkins are toys that look like products you buy. That’s it. They’re known brands of things like toilet paper and detergent and nappies and just stuff you see your parents buy, and they’re merchandised as a set, so you can buy more of them. Some of them are merchandised in box sets and some are sold in boosters, so you can’t be sure what you’ll get.

See, look, I’m not an idiot. Transformers wanted to sell me Transformers, and that’s why every Transformer I got from a store, rather than second hand, came with one of these foldouts with the names and identities advertising all the other transformers that I may want to go and get just in case I wasn’t aware. This isn’t a surprise at all, and transformers had a play pattern we got to see on almost all the ads – kids would hold up the robots with their hands and waggle them around to do stuff. I get how we were supposed to play with them.

And they had names and ostensibly some lore, tenuously constructed. None of this is new and nor is this other stuff meaningfully different. But while Transformers wanted me to buy alien robots that turned into robot cars to encourage me to buy more alien robots that turned into robot cars, so they could play and interact with one another. What Shopkins wants you to do is to engage with shopping for shopping’s own sake.

It’s a little bit playing house, and I get it, but somehow the whole idea of it, the idea of making the buying of the things the normal part of the play pattern that bothers me the most. It reminds me of Fortnite.

It’s not that Fortnite is a bad game (though it’s a game that doesn’t interest me at all). It’s that Fortnite, culturally, is built to promise you that you can play it for free, then puts social capital on expression that you then have to pay for. Kids mock other kids for having default skins or unpaid for characters, and if you play with the default skins, you are actively hunted, because players believe you to be an inferior player (and therefore, an easier kill, and since you get more attention, you are easier to kill).

Fortnite wants you to have Fortnite as your hobby, then it wants to charge you for expressing yourself in that space. It wants to be part of all your interests, and it wants you to think buying it and using it for those things is also normal.

I dislike Shopkins, I dislike Fortnite, and I find myself returning to the way that these toys, despite being just as much commercial crap as the other comparable social videogames and toys of my own childhood, these are ones that are trying to encode the idea that paying for the things is part of the game.