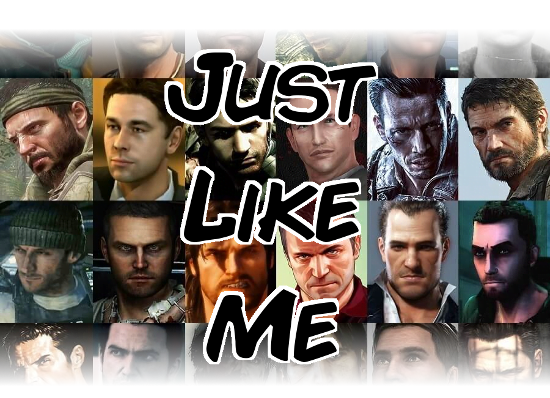 Representation in videogames has a problem.

Shocking, shocking, I know, and as a white man I’m sure I’m entitled to much more attention and kudos for noticing this than all the women and other marginalised people who have been shouting about this for years but please hold your thrown roses and your Gamer Writing Contracts. I’m not here to point out that 99% of game protagonists are stubbly white brunette guys, or how there was that block of years where every story, more or less, was about a dad on a rampage to protect his daughter-object. No, I’m wanting to ask an important question here that I feel gets really easily ignored:

What about the white guys?

Boo, stone him, etcetera. But seriously.

I’ve been playing videogames as long as I can consciously remember being alive. I’m not a stranger to this format, and the neverending churn of media means I’ve tried so many different things. You might think, in that cornucopia of media, which we already acknowledge is massively skewed to try and represent things that are like me, I’d have stories of all these great characters who resonated with me strongly. Heck, just by force of statistical inevitability, surely there’d be a host of characters in that who I could say felt ‘like me.’

I have a hard time thinking of any.

I was speaking with a friend today on this matter and he drove it into sharp relief for me; that the conversation about representation becomes very hostile when you want to talk about it from this side. The idea that white men are over-represented so, whether or not that representation is good or not is a secondary concern. I agree, but I don’t think that concern is a non-concern. I don’t think it’s as simple as ‘we’ll deal with that once we’ve dealt with the other representation problems.’

First things first, white guys in videogames are rarely presented as having actual complexity. They have a sort of script, a three-act structure that apes a degree of complexity, but it’s so tropey and standardised it doesn’t feel very real. The nature of videogames as absurdist structures where the player can ‘break character’ by behaving ridiculously, or failing at the game, tends to push games towards either isolating the player from the character’s behaviour through cutscenes (like The Last Of Us and Bioshock Infinite do), or by treating the character as if they are, yes, kinda absurd and never examining what they do because it’s a videogame (like the Nathan Drake games and Dead Rising series).

What this means is that white guys in videogames tend to be, well, simplified. If they struggle with anything internally it’s usually in the former games, as too-serious monologues play over sequences of you cartoonishly chainsawing racists in the face, or in the latter games, it’s thrown out the window the second the next plot beat arrives.

The result is that white brunette guys – which I must stress, I’m one of – are left with this super limited view on who they are. They’re inevitably into violence (even as some tut-tut and sigh about how they didn’t want to have to do this totally fucking awesome thing), they’re almost always completely removed from politics, and thanks to the representational problem of other than white guys, it’s also hard to see how they feel about their communities as well. Oh, sure, Watch_Dog’s Protagonist Guyface interacts with black guys, but because their struggles are rarely recognised in comparison to his privilege we don’t get any idea of how he feels about that, if he feels sad or angry or wants to help on the behalf of those whose plight he doesn’t directly share. We do see him interact with women, and they all die, and that makes him Mad and Motivates Him To Hurt Other Guys, so I suppose we learn that much about him.

Max Payne, of all characters, gets into some of this; he struggles with addiction and violence and while the mechanics of his game don’t follow through per se, he’s at least aware enough to recognise that he arcs from smirking, snarky, plot-contrivance-armoured comic book goofball to shattered wreck of a human in three games. But even then that speaks to one experience of white men, where toxic masculinity in stories and worlds that destroy our ability to cooperate and trust results in totally sweet dive jump kills but also deeply tragic ends.

Idly, you wanna know how many reviewers I’ve heard complain that Max Payne’s depressed self-loathing doesn’t sound realistic when juxtaposed with his violence? And how many of those reviewers have also commented on never having been in a fight?

This is the strange sadness of this white male glut. It’s not just that white guys are super common, it’s that basically one or two white males are super common. Change the sets and the hairstyles but they’re all basically the same guy, more or less. The exceptions stand out a little, but are still so much like the others they’re swallowed up in the morass. To this day there are still people who remember Cloud Strife – a fucking cipher – well and his two most defining traits are ‘fought for the environment’ and ‘wore a dress.’