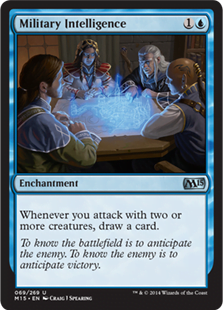 Once upon a time, this card was a green enchantment. It cost the same, otherwise, but it needed three or more creatures to attack. This is significant to me, as a snotty jerk with hard opinions about the value and meaning present in Magic: The Gathering cards, because it indicates two things.

First, it indicates that the original card, Overwhelming Instinct wasn’t good enough. It cost three mana and required you to attack with three or more creatures. At the time I played with the card, I remembered feeling that attacking with groups was more of a white or red thing, and Green cards should prefer to focus on attacks with single big creatures that could dominate the board with their bodies.

Second, it indicates an annoying trend that had I seen this a few years ago, I’d have howled about, where everything is allowed to be better when it’s blue. Because blue.