Last time, I discussed how 4th Edition D&D’s weapon system works, and today, I’m going to lay out some basic ideas of actual mechanics for use in Hunter’s Dream.

I think for Hunter’s Dream I want there to be a Trick Weapon subtype, and that category includes weapons with different degrees of complexity and support. Mainly I think that Hunters should be able to easily pick up the Trick Weapon Expertise or Trick Weapon Proficiency feat and have that choice open up all the possible weapons in front of them, rather than try and sort these weapons into other subcategories.

As weapons whose proficiency must be purchased, I think they should all be, generally speaking, pretty good. The standard go-to for a reliable and strong weapon for me tends to be the Longsword, which is a 1d8 weapon notable almost only for its +3 proficiency bonus to attack rolls. That’s our Boring But Practical baseline, and exotic weapons with the same traits include the Bastard Sword, which is just the same weapon, but with a 1d10 damage.

That’s our weapon group, now why might you want to pick up a Trick Weapon Proficiency, assuming the stats are about as good as the best Military weapon (the group most likely to matter to weapons users).

Trick weapons in Bloodborne change their shape, and that change is super cool. The mechanical incentives to change your weapon can be pretty broad, but as I’ve covered in 4th edition it needs to be a change that plays with the way the game already plays, and ideally minimises bookkeeping.

With that in mind I came up with three types of transforming weapon mechanics: The Two-Type, The Versatile, and the Action Changers.

I always approach the game from the perspective of someone interested in the powerful interaction of rules (we used to say ‘min-maxing’), and for me, I know that weapon types are powerful based on their support. This can mean that overlapping weapon support can be really powerful. An example would be the Alfsair Spear, in 4ed, which is a spear that you can use like a Totem – which lets Shamans (neat) and Druids (boy howdy) wield a spear weapon and use all the feat support for spears that exists. Another example is that light blades can be made to attack reflex, which is a really spicy ability to tack onto a different weapon group.

There are some weapon groups with really cool support out there – like the Flail, which can turn pushes into prones, or the Polearm, which can be made to interact with slides and prones too. This kind of crossover can mean that even if a weapon has no special keywords or particularly odd rules to handle its different weapon types, for the right weapon types, just being in two weapon groups can be an incentive enough to pick up the Trick Weapons category. This means there are going to be some Trick Weapons that may seem a little boring and practical, but they’ll still do the job just fine and be worth taking for players who are looking for an elusive Flail Axe or Spear Crossbow.

You might ask ‘well how are those things meant to work together’ and the answer is shut up, it’s cool.

This also means that filling out the weapon groups’ support, like addressing the way that the Axe is a little bit weak would add support to the rest of these tools.

Next up there’s the weapons like versatile weapons. Versatile weapons are made so that you can make the choice when you use them to get either a bonus to damage or keep your offhand free. This decision is made whenever you make an attack – you can even change that decision between attacks. The problem is you want the choice to be between two things that last an equal amount of time. If, for example, you could give up some damage to get a defense bonus, that defense bonus would have to last for longer than the damage penalty.

A simple example for this kind of design is a weapon that shifts between being a spear or a shortsword, which can be used more precisely in melee (+1 to hit) or at its full extension (+1 range). There aren’t many options for this – weapon properties don’t all work well alongside one another (Heavy Thrown and Light Thrown are reasonably redundant, for example).

Still, there’s room for a few keywords that let you trade some aspects for others. The ones that stand out are Range (and to an extent Reach), To-Hit, and Damage. These translate pretty easily on a per-attack basis.

These are the muddiest. Typically speaking, mundane equipment doesn’t often give you new powers except when you look at Alchemical equipment (which, to be fair, does require a feat to use like these). These are weapons who have a power attached to them that changes the property of the weapon at the cost of an action.

My general idea is to check if resemble the Saw Cleaver from Bloodborne. 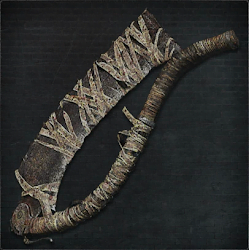 This is just one way to represent a Saw Cleaver, mind you, but the Saw Cleaver has an attack that does a bit of extra damage if you transform it mid-swing.

One example already developed is some variety of weapon that turns from being a one-handed weapon and shield to a large, two-handed weapon that does more damage, but can’t be changed back until the fight is over. That can be handled with the weapon having an Encounter Power that looks like this:

Gauntlet Shield Trick
Feature
Encounter Power
Minor Action
Personal
Effect: You lose your Gauntlet Shield’s shield bonus. Until the end of the encounter, you get +2 damage.

Another option is to draw on Bloodborne weapons like the Boom Hammer, which can be ‘charged’ to do something. Making a Trick Weapon with an encounter power that represents using a charge or something explosive set in the weapon seems like a cool ‘trick.’

Now, one other thing is, this kind of stuff can make a weapon, as a game entity you have to keep track of, too busy. Especially if you start involving magical abilities that add more daily or encounter powers to the weapons.

Dailies need a rethink already for Hunter’s Dream and we’ll get to that. For now, just assume that magical weapons are going to be a much smaller list of enchantments, and they’re more likely to be properties rather than Dailies and Encounter powers.

Another concern is that there are a small number of extremely cool weapons from Bloodborne that aren’t very good at translating into this system. Specifically, I’m thinking about the Rakuyo, the weapon of fan favourite and beloved lore character, Maria of the Astral Clocktower. The Rakuyo is a long-reaching one handed weapon with one moveset, and you can trick weapon it to turn it into two weapons with a shorter reach. 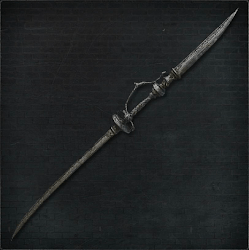 In 4ed D&D though there’s a mechanic for wielding a weapon in each hand and it’s not really very comparable. It’s not something you want to do very often, and largely, 4ed dual wielding either wants to be used with a specific power, or have some reason to keep a main and offhand weapon.

Oh, and not directly connected to this, the Rakuyo’s not actually a great example of a ‘trick weapon’? Mechanically it’s not meaningfully different to having a second, small weapon at your hip. Really, it’s almost like Rakuyo is cool because Maria is cool, and let me make it clear: I think Maria is really cool.