I started work on Hunter’s Dream back in January, with the basic idea being a way to play a Bloodborne style game set using 4th Edition D&D. The reasons are pretty easy to grapple with – starting with ‘I like it’ and moving on to ‘Bloodborne’s play experience is a tactical game of resource expenditure, not a story game of improvisation.’

Still, 4th edition D&D is a game of systems, and that means when you want to put something in the systems, you want to put in some rules. In Bloodborne, the trick weapons are a big part of the tactical experience, and they make the game feel that particular steampunky way. How then, do we bring that feeling into 4th ed D&D. 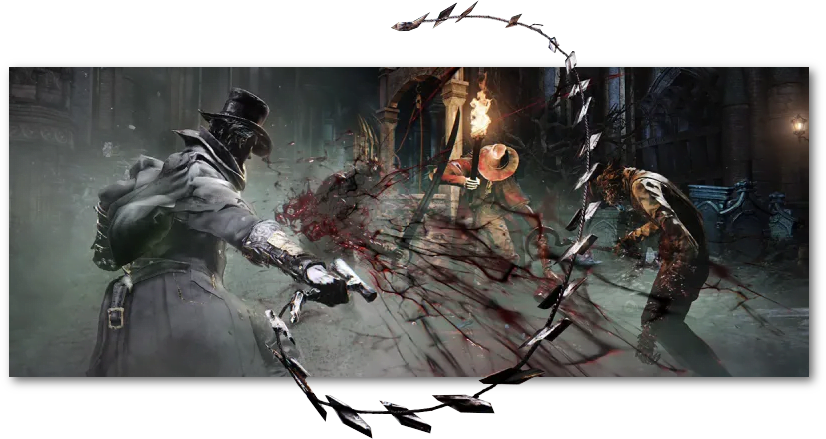 When looking at implementing these trick weapons in 4E, we want to consider what they do and how they do it. That sounds like basic stuff, but those questions are going to illustrate the difference between the two types of games and how I can make something that feels right in a different game.

Trick weapons in Bloodborne are weapons; you use them to attack opponents, destroy objects, and occasionally interact with environments in surprising ways – think about the times you cut a rope or knock down a hanging treasure. Broadly speaking though, the trick weapons are weapons, which you use to hurt people.

When you use them, you can change them from one form to another. Now here is where we can get a bit McLuahnish, and point out that medium and messages intertwine. See, Bloodborne is a videogame, and you play it with a controller. That controller has a number of buttons, and you, as a player, are expected to track maybe about seven to eight of those buttons at a time in combat. That means any mechanic you introduce, if it’s going to happen in combat, needs a button, and it needs a reliable button, because this combat is pretty high stakes. The game design is also what I call ‘fixed animation’ length – that is, when you commit to an action, you’re often stuck with it, and unlikely to be able to assert control over it along the way.

Following that, then, is that the trick weapons need to be weapons where your ‘trick’ doesn’t take a lot of buttons or fine customising. If you do those things, it’d take more time, and that might make it too inconvenient. With only limited inputs, then, the Bloodborne trick weapons are very binary. They’re either ‘on’ or ‘off’ – and you can swap them between one thing or the other in-combat. There are a few oddballs, of course, but generally, these weapons exist in form A or B, and in combat, shifting from A to B or vice versa results in a special attack.

Most of these weapons change in ways that reflect the technology of the setting. For some, the change is a big physical object shift; for others it’s turning on a special ability for the next hit. The weapons can’t be ‘normal’ weapons, even if they mostly resemble them – swords that become hammers, axes that become polearms, that kind of thing.

These two states want to be qualitatively different, in the context of Bloodborne; you’ll sometimes get different damage types, different speeds of attack, and different reach. In this game, those are very small spaces. Attack speed can be fractions of a second; Reach can be important down to similarly small units of distance.

This is our outline, the parameters we want to consider. Next time we’ll look at the challenges of setting this up in 4ed D&D.