This month, we’re going to examine overlapping skillsets as we look at not creating a character but creating a group of characters: The trio of monster hunters from the Fang-Em-Up Netflix anime, Castlevania. 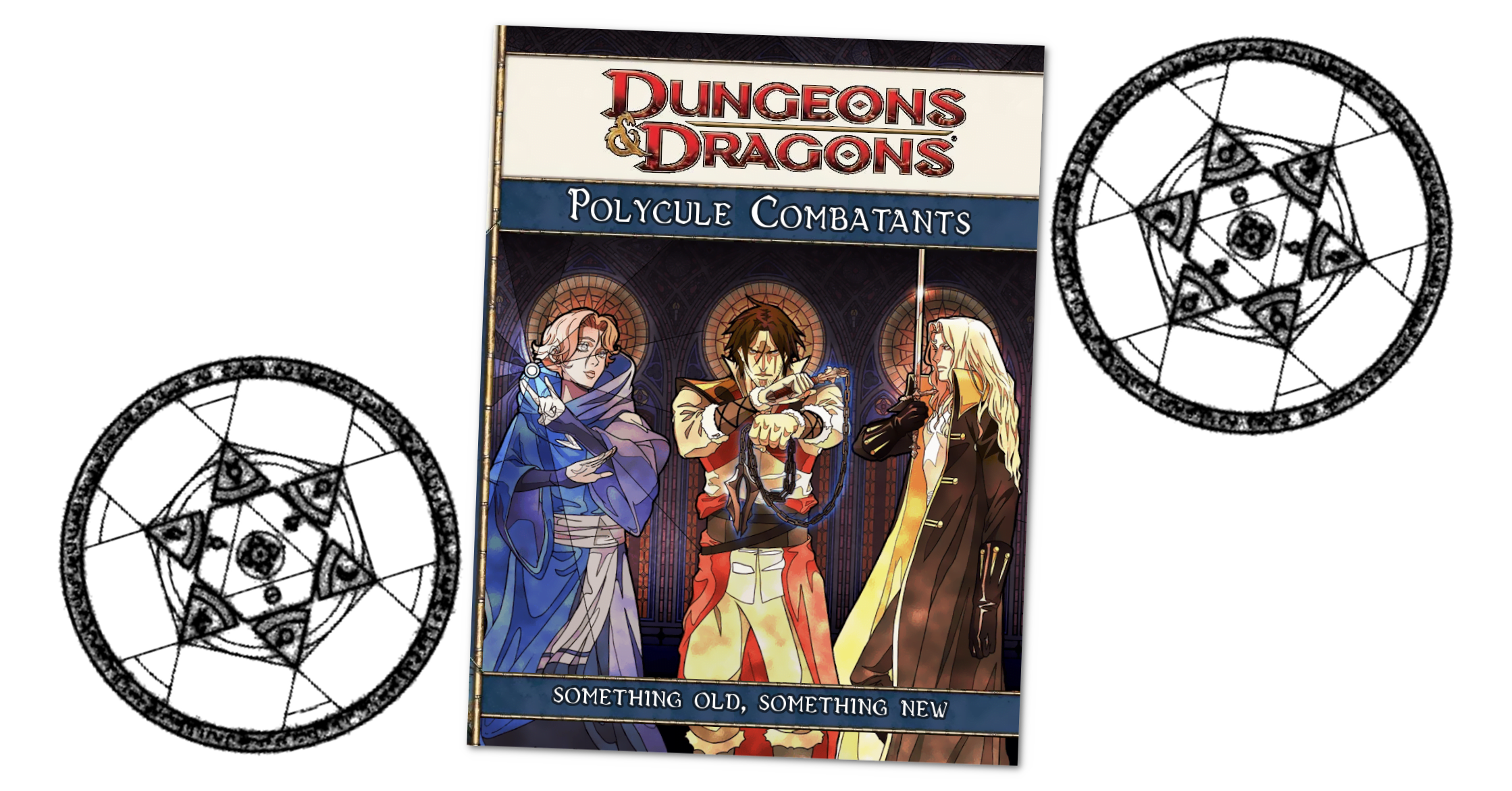 Oh hey, two months in a row where a disclaimer is necessary, boo hoy hey howdy! Turns out that since I wrote about Castlevania, back in March Last Year and started to plan this article for this year, some information has come out about Warren Ellis. What did I have to say about him last year? Well:

Ridiculous and posturing, energetic and digital, he’s also somehow managed a career as long as his without actually massively embarassing himself on issues that comic book authors didn’t seem to realise mastter that much

Boy did that age poorly.

Without relitigating the whole thing, turns out Warren Ellis has been creeping on women for a long time in the industry. That sucks, and it sucks especially because it can make the entire topic of Castlevania tainted for some people. I know I haven’t watched Season 3, in part, because thinking about his involvement makes me go: Ugh.

Point is, if you’re in the camp that hey, I don’t like or care about this thing any more, because one of the predominant names attached to it is scummy, then I 100% support and understand you. Here, have a link to some vampire related stuff not made by a sex pest.

Still, I like these characters. I like them, and I don’t think they’re so inextricably linked to him that they can’t be taken away and put to better use. If you’re, like me, fond of these characters, and want to take the ideas they represent and things that feel like them and play with them in your own space, then here, let’s steal some gold from this dragon’s hoard. 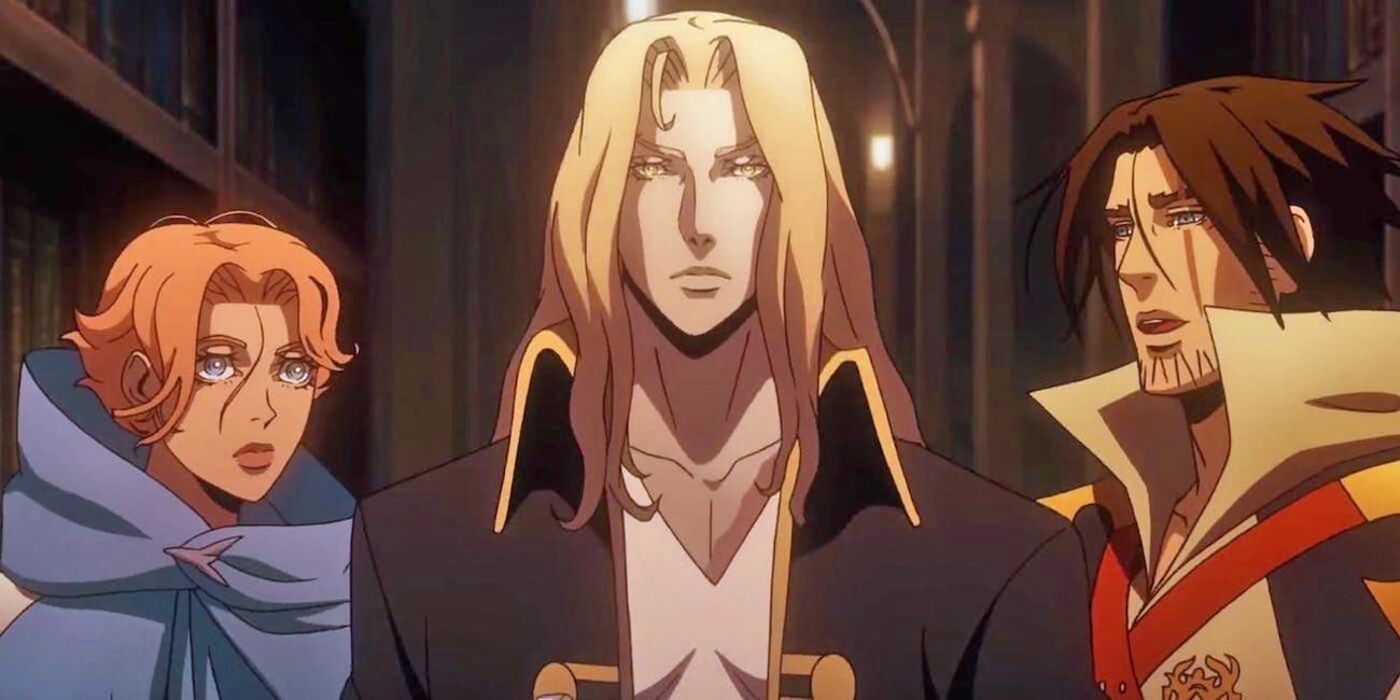 Alright, let’s look at these three.

First of all, how do they behave and how do they differ from one another? An obvious element is weapons; Trevor and Alucard use weapons (a whip and a sword), and Sypha doesn’t. Sypha tends to do things that look magical, but she also stands reasonably close to the others, too. None of the characters wear lots of what you’d call armour, which suggests either they’re all lightly armoured (maybe) or it’s a setting where people’s armour isn’t really the heavy metal kind.

Here’s a rules aside, by the way; personally, if the story is one where almost nobody wears armour, and the material value of armour is shown as being fairly unimportant, I think the solution when you translate that to D&D is to instead treat the way people dress as their kind of armour. In this context, you could argue that any of these three is ‘heavily armoured,’ thanks to their layered clothing.

Alucard attacks in both melee and range. Trevor attacks in melee, but his melee range is very large. He also just straight up punches Dracula in the face, because he’s the best.

This means we have:

There’s more specific stuff in each character, which we’ll look at when we go down there.


What we have here differs from the usual how to be options, because this time, we’re looking at a group of characters. In the show, the characters don’t comply too tightly to 4th edition rules and roles, but that’s okay, because a show serves different needs than a game. You could see each of these characters as taking the blows and the other for being the heavy hitter in the group, or you could interpret them as being distinctly different in the power they can bring to bear. Ie, it could be that Sypha and Alucard are very powerful, and Trevor is ballast.

This is instead going to want to look at these characters in terms of things they can share mechanically, synergies you can build a group for. That means that we’re going to try and find ways they overlap, mechanically, and things that we definitely can’t use together.

As an example, one of the iconic examples of group synergy is frostcheese – that’s where the characters all use the combination of Lasting Frost and Wintertouched with weapon attacks, to deal all enemies a 5 point vulnerability to cold damage, and constant combat advantage against them. This is a solid form of team synergy, because it doesn’t ask much of the characters doing it – you just need to be using weapons, using cold weapons, and spending two feats. I wouldn’t recommend the Wintertouched synergy as a place to start, though, because it relies on a feat that doesn’t show up until Paragon.

Another common option is a Radiant Damage synergy crew, sometimes called the radiant mafia. That’s where you have one or more character in the group take something like the Morninglord paragon path, start doling out radiant vulnerability, then players spend money on items that make that better. This is, again, really good, but doesn’t show up until Paragon.

Another option is to build this party looking for World Serpent’s Grasp synergy. This is really good because if everyone in the party has that feat, everyone can build easily towards it and spend a lot of time knocking enemies over; if I slow things and you slow things, and we can always pick powers that give us some options on that front, we can make enemies spent lots of time on the ground, limiting their options.

In both of these synergy set cases (and they don’t overlap), the important thing is to make sure you’re open to it, and plan for it together. They’re strong in part because they don’t make a lot of demands of you as players, so you can slot them into other builds.

What we’re going to do then is to look at each character and present an option for each of the three characters in each role. Thankfully, the game is really good for presenting ways to build characters in a lot of different ways; in this case, we can look at how does this character work then look at the class options that opens up in different roles.

Okay, Trev uses swords and chain whips. The iconic belmont weapon is a whip, so I’m inclined towards that, and there’s also a good weapon choice available in the form of the flail. Flails are great because flails open up Flail Expertise. Flail Expertise is good because it gives you ways to prone characters with a lot of attacks – any at-will attack that slides someone can now prone them, which you can use to interfere with enemy movement, or attempts to escape your grasp. 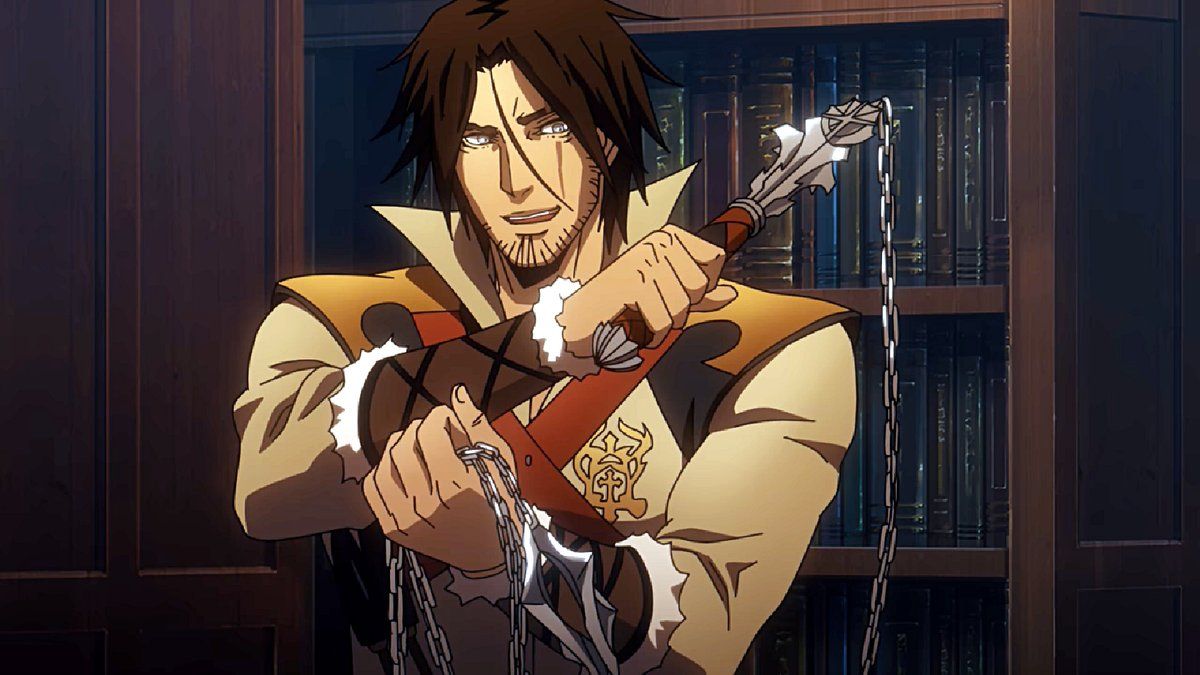 Trev is the least mystical of the three, so I’d look to him for martial power sources. That means for him, our options as Defender, Leader, and Striker are:

All of these options work really well for him. In the case of the fighter, you might think ‘but Trevor doesn’t use a shield.’ In that case, look at the Fighter and focus on either the grappling fighter (who have one open hand and one weapon), or the Knight, where you can wield one big two-handed weapon instead of a weapon and shield.

We know Sypha absolutely does not consider herself a witch and does not summon or serve demons, so she’s not a warlock or wizard. Sypha can heal herself and others, and do things with shields of ice and fire, but her healing doesn’t seem connected to devices. Sypha can punish people who attack her, and she knows rituals. This pushes my feelings on her towards a divine power source rather than a arcane one. That gives us:

There isn’t, surprisingly, an implement-based, non-weapon invoker divine spellcaster. The good news is that the Invoker does a pretty good job of it, because it has a bunch of area effect damage and some of the most solid low-level encounter powers for setting up damage, even if you’re only amplifying the damage of a tank or leader. 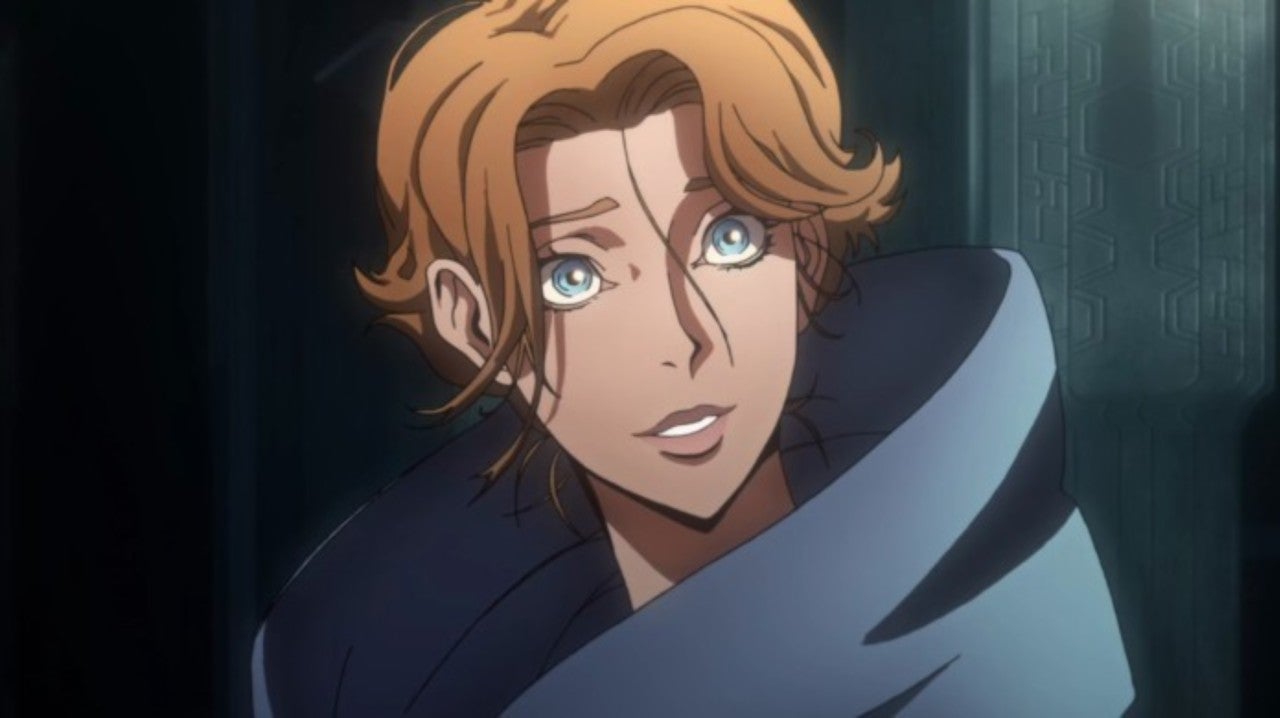 The Paladin can be built around Charisma – using yes, a weapon, but it’s a weapon channelling energy of the spirit. And you’ll only mostly need it for its status as a holy symbol – your at will, defensive attacks will want you swinging a sword, but at range, you’ll be blasting people with holy light. 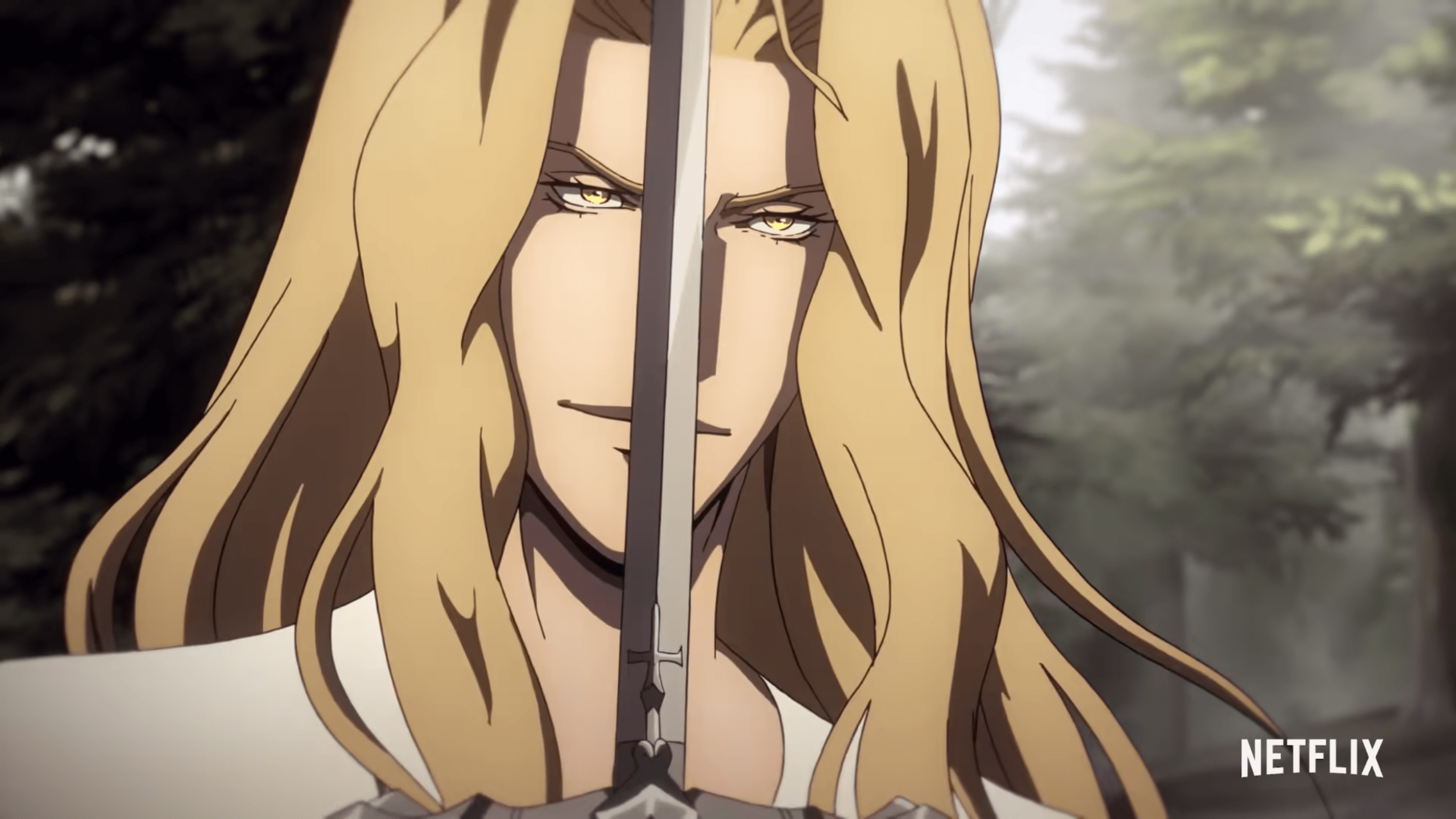 Alucard does fit reasonably well in an arcane power source; he after all, knows some magic, he does use it to manipulate the weapons around him, and he can recognise the rituals Sypha uses. And of course, as a class, he’s… got one option that’s pretty obvious.

Vampire, vampire, vampire. Okay, the Vampire isn’t a perfect match for Alucard. For a start, it’s just kinda weak. But it’s also a class that has interesting ideas in it, like the way you can slurp on another member of the party’s neck between fights, to recover yourself some health. It’s also a class that rewards you for behaving like a vampire, where you want to beat down on enemies, then suck their blood.

In each of these cases, though, they also give Alucard a chance to project a force of will, but also need to care about his toughness, things where being tough and having big healing surges is potentially meaningful. 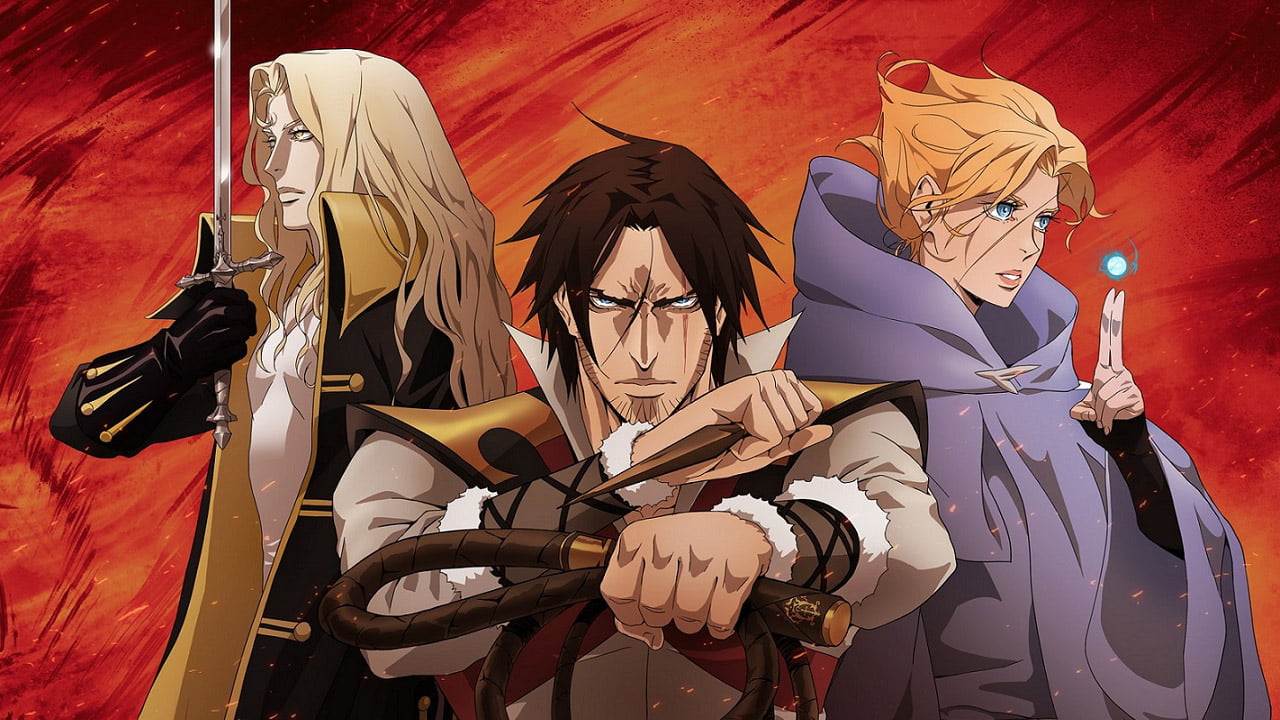 Now, these choices are set up so that the group can be built around any one of those different synergy groups I described. For Wintertouched, that’s not hard; you can get frost implements and weapons, and suddenly, everyone is doing frostcheese stuff. You could instead have the Sypha pick up Morninglord and give the whole crew Radiant weapons, and then you’re going there. You can even start out with the World Serpent’s Grasp stuff, then spec it out later when you all hit Paragon.

What’s the purpose of this kind of exercise, though? It’s to guide you through the way that, in 4th edition, class roles and origins are tools that help you structure things to fit the way you want things to feel, things that need to click together. You could make this trio in a host of ways, and cover all your bases without one player who wants to make the Sypha (for example) being stuck in Back Of The Line duty.

Origins are great! Class roles are great! And party synergy is lots of fun, so check out ways you can work with the characters in your party.