Now, are you prepared?

No, you are not prepared.

We’re going to talk about how you can become Illidan Stormrage. 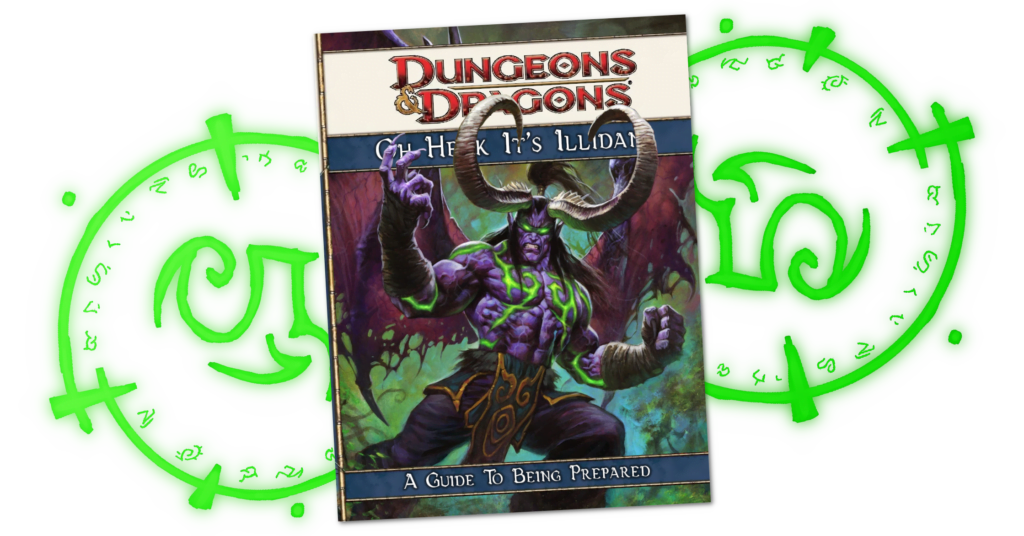 Weewwwww, could I instead, not do that?

I mean, I’m not trying to be a bummer here, but Blizzard lore isn’t exactly consistent. The World of Warcraft story featuring Illidan started in 2002 and has moseyed around in different representations which range from the confused (were he and Tyrande and Furion a love triangle or not? Sources say, maybe?) to the downright yikesy (so hey Illidan about that harem of mind controlled sex slaves). The actual lore of what and how Illidan‘s backstory is let’s face it, irrelevant, because nobody’s bringing a picture of Illidan to the tabletop scene and saying ‘oh, my character is like Illidan, and what I mean by that is I’m really interested in having a twin brother who gets the girl.’

You use the picture of Illidan, you evoke Illidan, because you want to play a towering murderbeast with two weapons, horns, wings, and probably no shirt.

Illidan has been represented in a lot of different games – Two different RTS games, a MMORPG as both boss and template for two different classes, two different tabletop RPGs and at least two collectible card games. What this character can do varies from place to place, but I feel that most of them are trying to maintain and capture the feeling of the RTS and subsequently, the MMORPG raid.

In the RPG, he was, somewhat inelegantly, made as a Sorcerer-Rogue-Fighter in 3rd edition D&D (lords) and in the subsequent RPG, a fighter-mage. That’s a useful starting spot.

In Heroes of the Storm, he adds

Lore-wise it’s kind of important that Illidan uses magic, and that magic is typically tied to something corrupting. Back in the first RPG rendition, that was represented by the sorcerer side, throwing arcane spells in a setting where arcane magic resulted in you accumulating brain worms. Illidan doesn’t call on a higher power, and he is kind of definitely non-natural. On the other hand, he’s definitely ‘demon powered.’

Okay, that gives us:

This is a tricky puzzle to unpick. 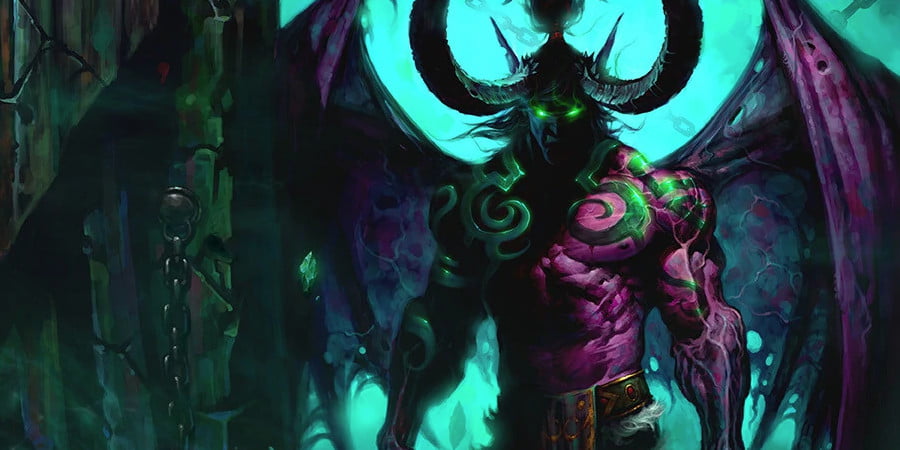 
Illidan is a much more mechanically complete character than we’ve dealt with before now, which is partly because he’s just meant to be a much more powerful and important one, and partly because he’s needed to satisfy a lot of different needs. We can however simplify him down into a few things that all builds must be able to do to feel like Illidan, or at least feel like they will eventually do things like Illidan does them.

First up, he has to dual wield. The weapons are big and ornate, but that can be all flavour. Let’s just wield them in the first place. Dual wielding in 4th edition can be treated one of four big ways:

For my personal preference, I would want to try the Waving Hands options. After all, the weapons are paired, they’re meant to match, and when I have an option to play a heavy hitter single weapon class, I usually will. You lose out on multiplying vulnerabilities, and it amy not feel right for you.

For most builds, you will be fine if you pick one of these and just stick with it. The multiclass option is tricky, because there are very few ways to do it and they tend to be specific too. One of the most effective ways to attack with two weapons, with an attack that on its own is worth building around, is to pick up the Ranger power Twin Strike. Know how you can get Twin Strike on a non-Ranger? Your options are to build a Half-Elf and take a feat at Paragon (something we try to avoid), or build a Hybrid Ranger (a can of worms we’ve not opened yet).

Second, there’s how you manage flying, and that presents another problem.

When you look at how flight gets used on Illidan in games like Heroes of the Storm, it’s basically just a charge. Oh him flappy and all, but the games always use his flight as a way for him to close on someone.

Another option is to use the mechanics of the Bozak Draconian from Dragon Magazine 421. This gives you access to Dragonborn feats, a fly speed at start, and even a death throes power. It’s great and will cover all your bases easily, and it even pushes you towards arcane classes. The simplest version of this character will use Bozac Draconian options.

If you find yourself with extra feats or don’t like the way the Bozac Draconian feels, you can consider as an alternative the Eladrin, using their teleport the way that Illidan uses his flight to charge at people. This is great, and there’s a ton of powerful stuff you can chain off it, but it does rely on Paragon feats and tends to eat your multiclass option.

Because these builds are fundamentally intricate and your options are limited in some strange ways, I’m going to look at three possible templates in terms of complication. Like, the simplest then the most complicated version of each build.

This is the big thing to brace for, though: This build is going to take time to fulfill. 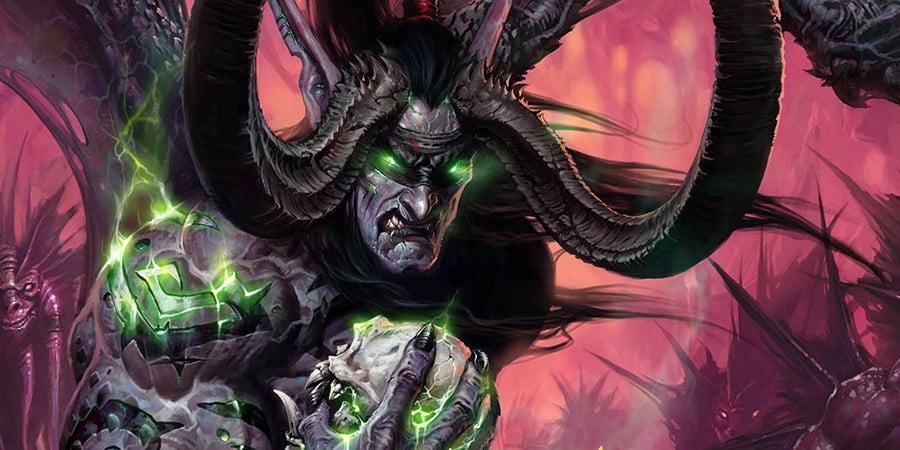 Warlock. Bozak Dragonborn. Grab a great big two-handed weapon. You will be focusing on Eldritch Strike, and flavouring the weapon as ‘two’ weapons as above. Everything that isn’t part of maximising Eldritch Strike, which is also a slide power, can be blasts or utility control powers. Warlocks have a surprising amount of attacks that get some nice spooky harrassment attached.

If you want to add more spice to your sliding, maybe you could build in a Polearm package – but that will ask you to have a decent Dexterity and Wisdom, and this build’s biggest virtue is that it can just be good at Charisma and not worry too much about other stats.

If we go with the Eladrin Diving method, we can pick up a lot of the techniques from our Corvo build. Retheming Fel power as tapping a demonic or haunted magic, you can pick up the Avenger, which has problems with dual wielding. There are builds of the Avenger that want to take multi-attack powers from the Ranger.

The Eladrin gets to benefit from Feywild Charge in Paragon, so you can dive around the battlefield, doing a lot of swooping. You also get that mix of melee attacks and things that harrass and challenge spellcasters. Ultimately, I think the biggest mark against this build is that there’s no way to really get that mix of dual wielding without opting for ‘waving hands.’

This is complicated because of things you need to know to make changes to it, but when you approach your DM with it, you don’t need to get too elaborate. The basics is you take Hybrid Ranger and Sorcerer, and stick them together. For simplicity’s sake, and to free up feats, I recommend this be on a Bozac Dragonborn, which covers your flight options, and also encourages you to be lightly armoured.

At base, this character has wings, wields two weapons, a bonus to Strength and Charisma, and their armour cares about their strength modifier rather than their dexterity or intelligence. You can wield two weapons, and rely on those weapons’ proficiency bonus as you level up.

This build gets exciting options for your utility powers. Sorcerers have a range of powers that are designed to protect a squishy spellcaster who can’t punish people in melee with you, and the Ranger side of you wants you to isolate an enemy and pound on them. Sorcerer utilities are in some instances useful to tanks, so putting it on your melee striker can be pretty useful. Other sorcerer powers to look out for are the Reaction and Interrupt powers – powers that let you retaliate when you’re attacked. That means your turns are spent moving around, positioning yourself, and attacking things, with your off-turns being about enemies getting explosive effects in their face.

This can be complicated, but the good news is, Twin Strike is your fairy godmother. When you play this and level it up, just running at things and Twin Striking them will usually do decent damage and give you a good chance of contributing. This gives you a lot of room to grow and get flexible, and to look at every power available to you every level up. You’re also going to have to shoulder an implement as well.

Because this relies on strength and charisma to feed one another, we want to go back to the Bozac Dragonborn, even though I love me some blinky Eladrin. Also, you’re going to want to make good friends with your tank and leader – this is a build with some really exciting, explosive potential, but in the early game you are a squishy wizard with some big knives. 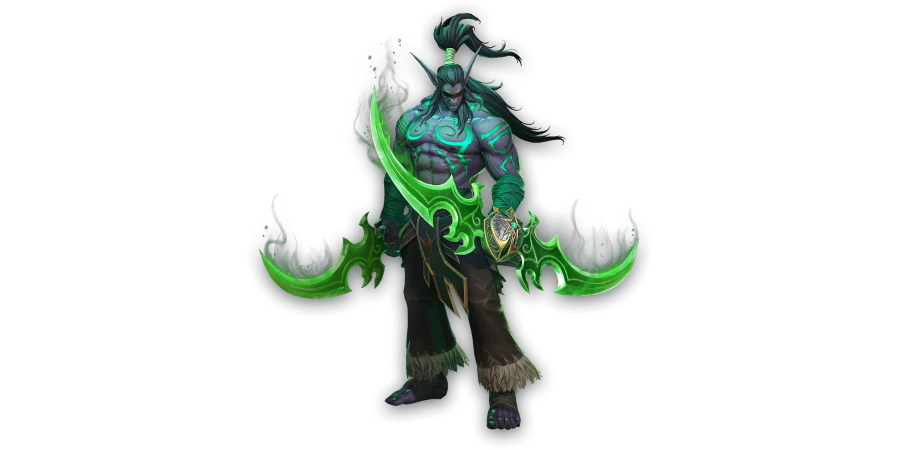 Remember that these builds are designed to get you your Illidan Vibe early. This means that they want to provide broad build options, where you’re not stuck on particularly narrow choices. If you need six of your feats picked by level nine, then it’s a lot less like I’m giving you tools for building your own character who feels like Illidan and more like I’m just handing you a specific build for a character. There are problems I would try and route around in all these builds, but those are things to address when you have more than a few levels to play around with.

One of the simplest versions of this, by the way, is a Tiefling Ranger with an Infernal Prince theme, picking up flying boots later on – that build is simple as hell, but it might also feel unsatisfying if Illidan’s wings can be popped off.

You’ll also notice literally none of these builds had a shapeshift in them! That’s because it’s just really hard to do that at all with the constraints of dual wielding. Dual wielding can be made to work with a lot of classes, but you kind of have to make a choice to leverage it in.

Woof, this was a hard one.

In the end I’m not satisfied with any of these builds to play, but I think they all serve as good places to build. I can see how I’d take them in different directions when I could make more pointed choices about what to sacrifice about the feeling of Illidan.

That said: I am VERY pleased to have learned about the Bozak Dragonborn from this. An obscure little dragonborn variant from a Dragon magazine, the way they work as ‘easy’ fliers opens up a lot of different strong builds.