You may have seen me from time to time talk some shit about superheroes or characters in superpowered contexts whose superpower boils down to has a gun. The Punisher, for example, is a dude in a superhero universe who isn’t really a superhero – he’s just a homeless dude in a van with a lot of guns. A prepper with a mobile home. He’s the worst.

It’s not just the Punisher (who sucks), though. It’s also something I joked about when watching Kamen Rider W (which ruled), where one of the special abilities the hero could unlock was using the trigger Gaia Memory (it makes sense in context) to get a special superpower magical gun, which I would nonetheless jokingly refer to as has gun.

This particular affect, though, is something that derives from an old kids’ cartoon that I love, and have spoken about before. It’s a reference to the name Gunhaver, from the Homestar Runner cartoon (within a cartoon? The characters are shown playing with the toys and watching the show) Cheat Commandos, a parody of 80s toy-ad militarised cartoons like GI Joe 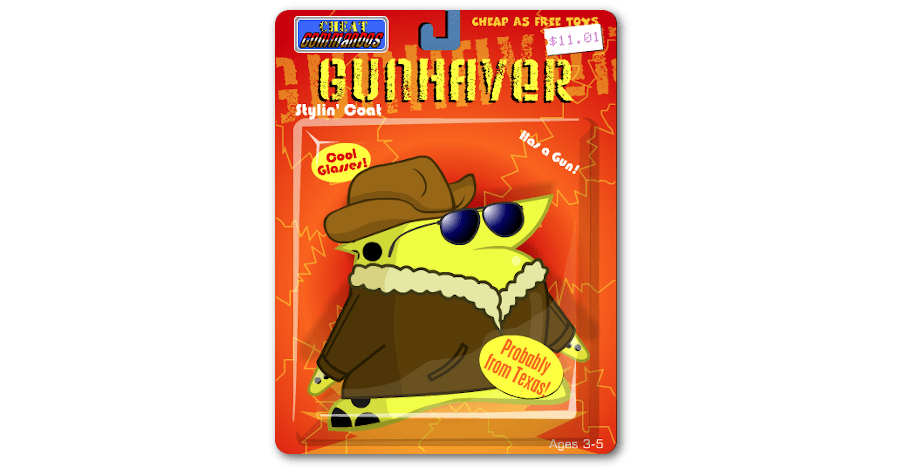 A thing I’ve loved about Homestar Runner is the way that their jokes, often their best jokes, involve gently pointing out details that normally go unstated (“goodbye, Baloneyman, and may we all forget you probably have a really sketchy past.”) When you watch these cartoons over and over again (and I did, because it was easy to download them and they worked on poor connections), their memetic quality was valuable and you spent time seeing the jokes from lots of angles.

There’s a lot of jokes I repeat from this cartoon, whether it’s tone or a structure of delivery, or when or what to imply about myself for comic effect, including even tangents, but okay, distracted. The point here is Gunhaver. Gunhaver is The Generic Leader of the Commandos. There’s nothing to his character, not really – he just is in charge, gives useful and boring orders, and in his appearances, just serves the basic plot of the story. When you talk about these squads of diverse characters with connected abilities, like GI Joe and MASK did, the point was to individualise characters, often with clear and visually striking gimmick.

Gunhaver’s gimmick was that he had a gun.

This is not to say every character with a gun is a Gunhaver. After all, lots of the science machine devices you see super-dorks use are ‘guns,’ but they’re ‘guns’ they made. They’re guns that are a thing they made, and needs special skills to make. There’s also weirdo sharpshooters like Hol Horse from Many Jojo Things I Don’t Care, where the gun is just a way to express the real powers they have, or Homura from I’m Not Allowed To Make Jokes About Madoka who is a time traveller who uses guns because guns are the most obvious thing you can do when you can also time travel and you’re a twelve year old who has no reason to respect the sanctity of life. 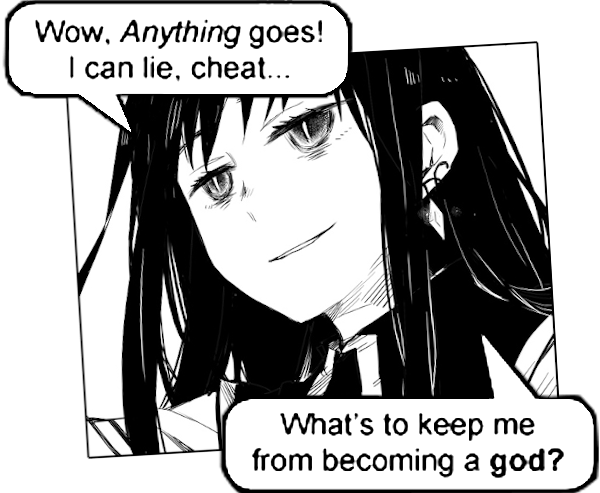 Not so for a Gunhaver. Gunhaver characters are notable because the thing they’re wielding is just a gun. It’s a gun, which is a commercially available product in their world. Maybe the quantity of guns suggests some kind of wealth, though that’s never really what gun communicates in media. Certainly, the absolute arsenal that the Punisher (for example, again, who sucks) drives around with represents a significant fraction of a million dollars, because guns are expensive, but that’s never the important thing.

The important thing is that in a world of the fantastic, in the landscape of the infinite ways we can make metaphors out of powers, in a place where your characterisation can be expressed by your powers, the power you have is bought something a real person can buy. And do! And some of those people are the most boring and awful people around, and they make having the gun the closest thing they have to a personality.

You can make interesting characters whose powers need to be enabled by a gun. Even Black Widow, a character I waver hither and thither on, is essentially a super-spy and gunhaver, but her gunhavery is at least an interesting part of a broader skillset. Heck, just by comparison, Black Widow and Bobbi Morse are both women who stand next to each other with nearly identical skillsets, but very different personalities, and the presence or absence of a gun in their skillsets doesn’t come up.

It’s not like bad characters Has Gun, it’s just if you’re going to Has Gun, have a reason that’s interesting. Be something other than a fucking holster.

It is the most boring bastard of a power.