Today, January 3rd, 2016, is the both the 85th birthday of Rokusaburo Michiba, the first Iron Chef Japanese, and the 20th anniversary of his retirement from that show. 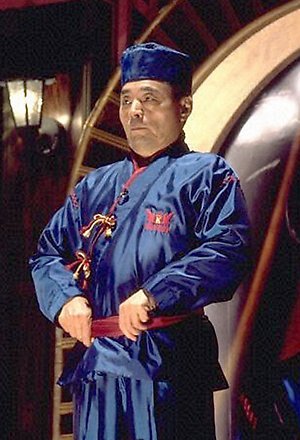 I have loved this show since I was a teenager and it was screened on tv here. I used to sit down in my grandma’s bedroom, at a family gathering every week, and – sometimes with my cousins, sometimes without – I’d watch a dubbed episode of Neon Genesis Evangelion, and after that, Iron Chef. It was at first just a novelty – what the hell? – and then, slowly, it became something I wholly cared about.

Then I grew a little older and I went back and studied it a little – was that thing I liked really that weird? Well, guess what, it really was that weird. But once I was an adult I realised that no, this series wasn’t weird accidentally. I wasn’t sitting there and staring at the oddness of The Funny Japaneses. I was watching a deliberately performative form of media. It was real and it was fake, it was a competition played with ridiculous pieces. It was a pro-wrestling cooking show.

And I love Iron Chef’s heightened, ridiculous, excessive love of the weird. Part of the weirdness is further alienated by a layering series of translations. See, on the one hand, you have the actual actions of the chefs and their personalities. Then layered over that, you have the commentary of Yukio Hattori, who’s very educated and aware of what he’s talking about, and then layered over that, you have the commentary of Fukui, who is explicitly trying to make this sound like baseball commentary, and then you have layering on top of that, the translators who are doing their damnedest to try and translate all of this squalling mess of guff, and then you have the dubbers, who, handed that translated script, are doing their best to convey the same emotions and maybe… just maybe at the end of that some of the original comes through.

The weirdness of Iron Chef for me is the juxtaposition of the Rokusaburo Michiba I perceived and the Rokusaburo Michiba I know. Because the guy I saw was a terrifying machine. He had the best record. He was in his sixties and he was cleaning the clocks of other, lesser chefs. He had the time to set aside, before the match started, time to just write a menu, which was like, a really supreme confidence show. What he prepared was often very impressive (in ways I didn’t understand) and he rarely had technical failures because what he was trying to do rarely used the weirder devices like the ice cream maker. He was the iconic terrifying Japanese samurai character – a traditionalist force, an old man who can just own the world around him because he’s been doing this for fifty years and he’s been good at it for forty.

Then I got older and learned that, even at that point in time, Michiba was the Wild and Crazy Kids of Japanese cuisine. That he was using French ingredients in the hypertraditionalist field of sushi preparation. That he was a grandfather and so often when the camera was pointing at him he was laughing and joking. That the cast loved him. That the camerapeople loved him. That when he had a heart attack, there were serious talks about cancelling the position out of respect for him. The he’s the one who picked out his sucessors because he wanted people to try new things, he wanted courage and boldness. That he, for all that he had projected a tower of emotionally reserved traditionalist terror… he was this really lovely, sweet guy.

I really like Iron Chef. And today, I remember this important event, where an old man survived a heart attack and had to set aside something he loved doing, in the name of his health and his family.