Been thinking about bag builders lately.

If you’re not familiar, a bag builder is a type of game where you have a bag – an actual, physical bag – that you can’t look into very easily. You put things into the bag, ideally things that are hard to tell apart from one another by touch, and then players draw things out of the bag and check the results that indicates.

In its simplest form the bag builder is a slower, more elaborate form of dice. You have a random distribution of potential outcomes, and players choose one. It’s slower because a dice roll is stunningly quick and you can roll four or five dice at once. Really, dice deserve a special mention here because when you’re rolling dice it’s faster to resolve the four or five dice than it is for the player to process the result. 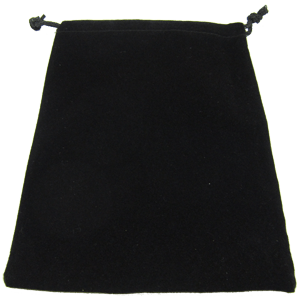 Bag builders swerve wildly away from dice when you start to think about what kinds of control you have. Now, you can make dice do weird things with probability but generally speaking if the game starts with 1d6, you have a hard time making that dice mathematically behave like 1d8. you can usually go down – odds and evens lets the dice behave like a 1d2 – but you can’t readily go up without getting into bell curves and distribution matrices.

For a bag, though, if you want something to be 1d7 you can just put in 7 options in a bag. That’s a pretty basic use for a bag, just to make a sort of softer dice. It puts the cognition on the ‘roll’ earlier, too – players retrieve the object from the bag, and look at it – the action has stopped, and the result is literally in their hand.

The bag builder being a more ornate and elaborate thing means that it won’t be as good for simple turns and simple actions. I think that a good bag builder wants to draw from the bag, say, once a turn, make it the centerpiece of a turn. Rerolls (putting tokens back and drawing again) are valid, but generally, if a player does something with the bag, that should be the turn, and then the choices come from what to do with what you draw.

Here are a few things I think about doing with bag building mechanics.

Some themes I think I can do with Bag Building:

Try out bags for designs that: