I have these in my D&D setting, and I have them because, removed from any ontological questions, they are cool things. An orc is like a human, but bigger and usually more physically brawny, and green, and being able to play a half-orc means you have a bunch of outcaster cred, you get to play with the way you look in a way that’s got meaningful signifiers attached to it, and you can funnel your intentions through the lens of ‘how people see orcs.’ The orc – and the elf, but more on that another time – are perfectly good fantasy tools that let you play around with the space of meaningfully physically distinct humantypes, and half-thems are great tools for giving players a way to play as outsiders learning about their world.

I like ’em! But they often, in many settings, don’t make much sense. Part of why they don’t make much sense is how they relate to the half that gets mentioned, the not-human part of orcs, and why they can breed with humans. Questions get asked, and I’m the kind of world builder who’s curious enough to want an answer, and an answer that doesn’t make me wrinkle my nose and go ‘well that’s stupid.’

With that in mind, and knowing these are creative toys for my friends to work with and designed to be played with, I want to make sure they’re something that has space in which to play. What then, do I want an orc to be in my settings? 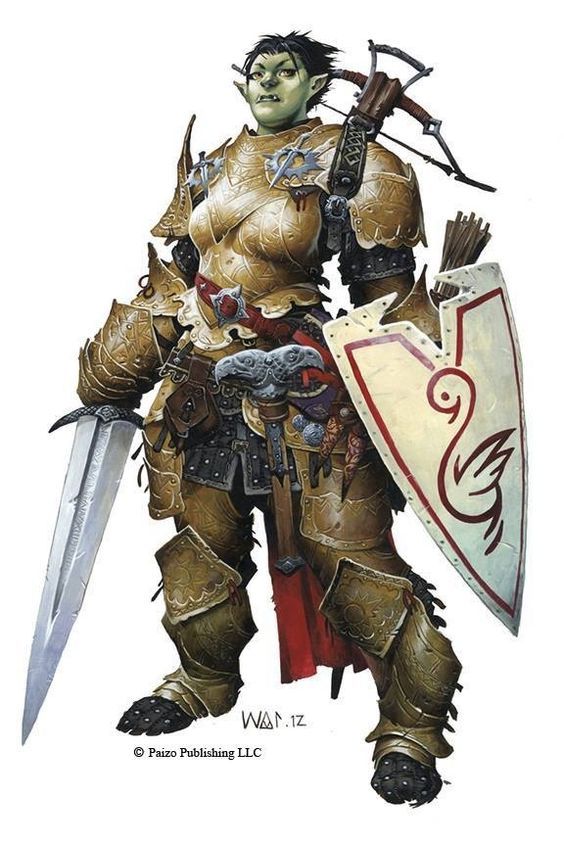 Briefly let’s set aside the racism issue, because I’m wildly underequipped to try and fix racism from a character sheet. There’s a lot of racism bound up in treating orcs as a monoculture that reflects an existing human culture, especially in game books which present more orcs than they do non-white humans.

What then, is an orc, and how is it meaningfully different from a human?

Well, first, in my setting, humans have diverse ethnographies, a term somewhat hamfistedly employed to try and technicalise the phrase ‘yes, my setting has black people.’ My setting has black people and Asian people and varieties of brown people and it has caucasian people and I’d hope it doesn’t have ‘White’ People because ‘White’ People don’t exist (big topic, not up for debate, do not @ me). Humans have general phenotypes and trends, with a range of some humans being stronger, faster, tougher et cetera than one another, but the gaps between all humans aren’t that wild. Orcs then need to be something that is different enough to have meaningfully different stats and gross physical qualities.

Orcs are the thing I’m focusing on here though because they’re the ‘hardest’ one to deal with. Sometimes I see orcs treated as a human subrace (talking about loaded language) but I don’t feel like I like the idea that there were humans and then there were orcs. That makes orcs feel a bit ‘made’ and it also taps into ideas of orcs as having a ‘younger’ culture and that tends to play into stuff Tolkein liked where cultures were basically on a timeline leading up to eventually being British and having waistcoats. Let’s throw that out. Let’s throw out the idea of the unnaturally created orc, too – orcs don’t need to belong to humanity.

What I want them to feel like is an anchored culture that exists in the world, that has what we’d consider a natural life cycle; they live, they reproduce, they pass away, they have and make stuff, they have social systems and culture and art and poetry and all that good stuff that people use to make sense of the world if they’re in some way like humans. I do still want the physiological diference – the strongest orcs are stronger than all but the strongest humans, for example (and thank you to 4e for embracing the idea of pluses-only race stats).

Then how can they breed with humans? 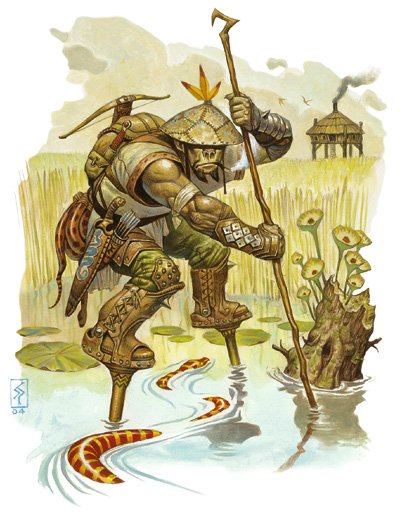 And now I take a moment to justify that.

Back in the day – the day I say like it was when people wore tweed or whatever – but back in our history there was another race of hominids on earth called Neanderthals. They were like us, but they were stockier, seemed suited to specific environments, but otherwise largely seemingly a lot like humans. Commonly anatomically different, visually distinct from humans at a glance, but also not so different they’d formed a new species. They were basically a neighbouring ‘race’ on Earth, and they existed for something like 300,000 years. During that time they made tools and art and had social culture and all sorts of stuff that we had at the same time.

Humans and Neanderthals did it. Now, some people out there might be thinking this is sign of a lot of nonconsensual doin’ it, back in the day, but if you’ve dealt with a human emergency room you might realise that humans will fuck almost anything and suddenly the idea that humans were going to the Neanderthals, hanging out, trading goods and culture and maybe doing it a bit and coming home doesn’t really seem a stretch.

That’s my idea for orcs. Orcs and humans share an ancestor, and at some point they forked off and got greener and stockier and heavier, and we went off in our own direction and I dunno, developed reality TV or something. The orcs present in this space are a cousin species and produce hybrids (the half orcs that started this fuss), but they’re about as culturally old and diverse as humans. There may be some trends – we might see orcs tend towards environments where humans have a harder time surviving without help, meaning more nomadic cultures across wider plains or deserts, or maybe it means they’re able to make large infrastructural projects with smaller labor forces. Maybe they’d have cultivated forests with towering treehouses in them because those are cool and elves don’t get all the cool stuff.

The other thing is once I have orcs in mind as a people, as people who are made of meat and relate to the world without magical buffers or godly entities, the next question becomes ‘how many orc cultures are there?’ Assuming they were separated enough from humans to speciate, they’d be as diverse as humans if their population grew the same degree. That opens up the idea of different varieties of orcs – not just in the monster palette swap way, but actually meaningfully different cultural groups with different ethnological practice. Not just ‘our orcs are kinda Japanese’ like you see in Warcraft, but ‘these orcs over here make lodges and cabins and live in buildings’ and ‘these orcs live by the seaside and follow the fish schools’ and ‘these orcs live in the crags and ropescale from place to place.’ 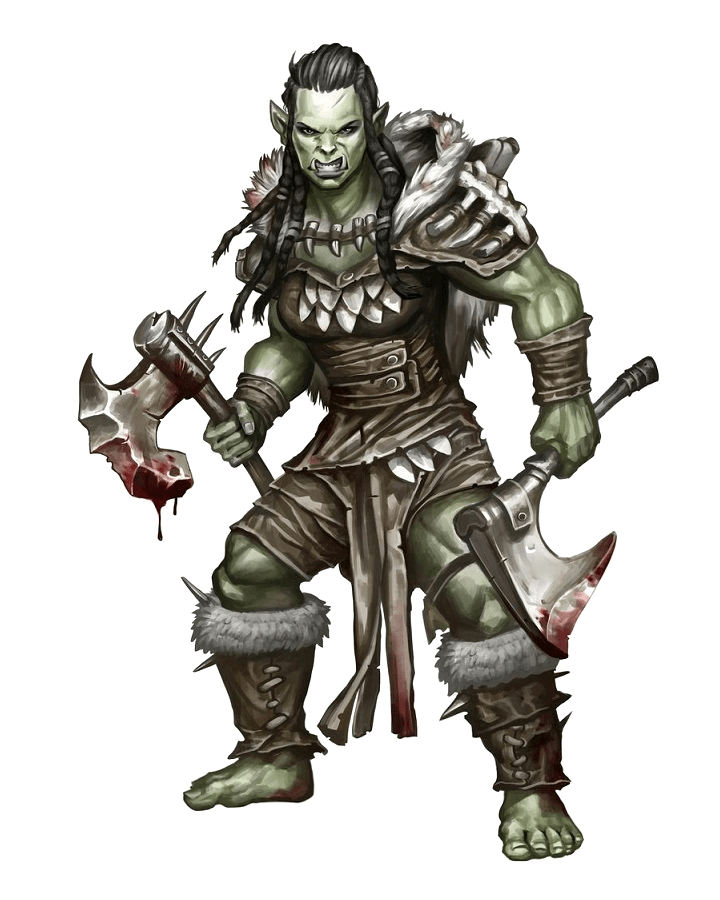 This isn’t to say orcs have empires or necessarily nations the way humans do – after all, they might have different cultural mindsets, I’ll have to decide what I want. There is kind of a neat idea to the notion that orcs have reputations as wandering marauders and bandits – because the orcs most likely to be hucked out of orcish society and left to fend for themselves are violent assholes who can’t get along. That’s pretty interesting.

It also presents the idea that there’s a time for cultural exchange when large orcish settlements interface with human ones. I particularly like the idea of orcs having cities, just not where or how humans expect them to be. An orc city may look like an open forest because all the exchange is happening underground or asynchronously or people are up in treetops or the population of a single connected city is spread out over a large, wide area that makes it look like a number of small towns, but the faster moving, tougher orcs think of them as all being one ‘thing.’