My earlier treatment of Orcs in Cobrin’Seil was intended, at first, to be a comprehensive examination of the half races. Elves and orcs and humans, the big three that show up in most of the editions of D&D’s player handbooks and most of the settings for them. As I did this though I realised that for all they may work just fine as different versions of the same thing for your setting, I don’t like them feeling so similar and especially not when I laid out my idea that Orcs are made of meat.

One of the questions this examination needs to answer is why are there half elves and half orcs? Perhaps a permutation would be why them and not half-other things? Some settings even answer that with things like the Mul, or half-centaurs or half-catfolk or so on. In that case, the halfness comes from a fundamental trait of humanity. I can buy that? Some people like it when humans’ ultimate flexibility includes with whom they can breed. It certainly fits the human cultural tendency to fuck things.

Anyway, if humans can breed with everything, the question then becomes why there aren’t half-everythings, and that creates just a massive mechanical spiral. Like, how are you going to make equally supported, player-optionable half-everythings, and if you’re a half-human half-goblin, wouldn’t you rather be special than representative of a common trend? This implies there’s a value to limits of the flexibility of these species, that it’s better to not try and represent a giant pile of options.

If you instead limit it to humans and orcs and elves you’re left with a question of why just them. Originally, I conceived of using an idea from evolutionary theory, which we call ring species. Ring species is a phenomenon where groups can be separated out from one another by space or boundaries long enough that they form into groups like A, B, and C where A can breed with B and B can breed with A and C, but A and C can’t breed, which is a pretty handy way to talk about interesting ideas of how evolution can work and apparently, also, not truly true. Like a lot of exploratory concepts, though, the idea is reasonably sound: genes have to travel over space after all, they don’t teleport. I could make orcs and elvs into ring species of humans, but even then I still don’t like it.

I don’t like it because elves are fragmented, and of the many different kinds of elves available, there’s a meaningful value to each one to some people. Some of my friends care about and would miss some of the components of elves. Also, elves are used to do things that are different; orcs of all varieties tend to be distinctive because of the lives they live, or the places they’ve lived and come from, but elves are different because of fundamental elfness. 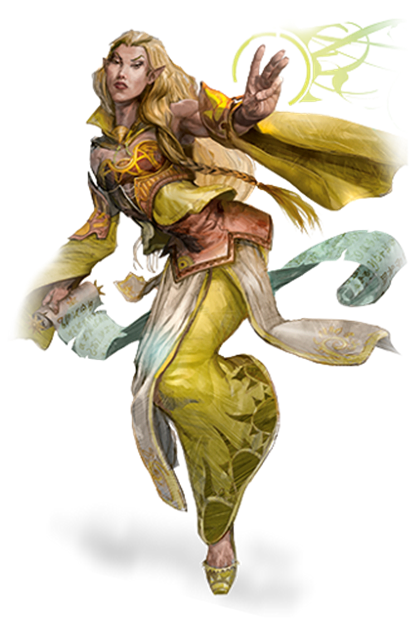 In 4ed D&D, the challenge of dealing with ‘elves as nature spirits’ vs ‘elves as Legolas’ were split into the Eladrin and Elf races, but even that’s just accelerating an elf arms race from back in earlier editions, a race I was actively a part of propogating like a fool. The big core splits between elves are drow, the nature spirit kinds of elves, the archer-swordsman-legolasy elves, some ‘more magey’ elves, and sometimes you get the ‘wood’ elf, which back in 3.5, was ‘a half-orc plus an elf, plus access to elf benefits,’ because fuck you, half orcs.

Elves have benefited a lot from being a favourite race of a lot of designers.

Anyway, the other thing is that elves do a lot of things that make no sense with the rules of how their lifespans work, biologically or otherwise. A creature that lives three times as long as a human is going to be pretty different and encode memories pretty differently, if only because humans demonstrate a really fucked up relationship to our own memories after only like, five years of fully-formed brains.

Anyway, if elves don’t make any sense as creatures of meat, what is there for them to be? Especially when they relate to humans in this special way? What can we do to anchor them to humanity and to their previous possible story spaces? How can they work?

Here’s my idea. Here’s what I’m doing, and what I like.

Once, a long time ago, there wasn’t anything like a person. There was nature and the wild and there was the magic of the things that aren’t person. There wasn’t a name for it, because there didn’t need to be a name for it. The wild was teeming feeling and needing and feeding and moving, it was being born and dying. When it found something new, it became part of the wild, and the wild grew and became more. Even calling it the wild is wrong, because calling it anything would indicate that there was a thing that had a name.

It didn’t need a name.

And then there was a person.

It didn’t come from the wild. It was outside the wild, and it knew things, and it could know itself. And the wild didn’t know that knowing itself was a thing the wild could do.

And as the wild did, when it found something new, it became part of the wild.

The wild became something that could know itself.

It made a person.

The notion is that elves are like humans, because elves were created in response to humans; a first encounter between humans, with their ability to self-reflect and some critical ‘consciousness’ was enough to induce the fae wild to create its own version of the same idea. When given a self-identity, the very first thing this chunk of fae reality did was tear itself to pieces because it was incredibly complicated to exist.

This is because I find, as a metaphor, the notion of demonstrating that ‘being a person’ is extremely difficult. Having an identity, choosing who you are – that’s really hard! And I think making it text to the elves gives both an interesting idea for why humans and elves have their mutual common ground, without making elves Another Kind Of Orc.

Now, this is something that happened in the past, and since then, there’s been enough time for the cultures to develop and differentiate. They have their central origin – they’re a result of the wilds of fae culture trying to create a ‘human.’ The varieties of elf culture, and the different ways elves work is the result of warring stories – competing narratives about what the elf ‘could’ be, which eventually became the different strands of elven subraces.

That gives us potential ‘stories’ that form the base of the elves, the eladrin, the drow, but also lets me throw in the shadar-kai. Half-human variants are a natural byproduct of the story of an elf trying to make sense of itself in light of engaging with the story of a human.

What do we get out of that, then?