Back in the day there was a paper product called a magazine, like the thing that I will always call a clip in a gun because it tweaks the nose of people I enjoy lightly teasing. You got a tree and you hammered it flat, and then you like, carved into it? I think? It’s hard to say. Anyway, Dragon Magazine was a thing and you could get a little bit of D&D content, every month, developed (hah) and playtested (pfft) by expert professionals (BAHA HAHA).

One month, they did a feature on ‘wild races’ – different race options that were a bit more monstery, a bit less common. This set of ‘different ideas’ was a set that kind of feels standard now – there was an elemental rocky person, there was a spooky, gloomy one, and there was a cat person. This is kind of the three basic spaces that it seems that edition of the game had going on, the negative space that designers were overwhelmingly drawn to. Rock, cat, goth.

Also, mixed in amongst them, there was the throw-it-in, why-not creature of the Gruwaar.

Who I misread, and spent the intervening fifteen years referring to as the Gruuwar. 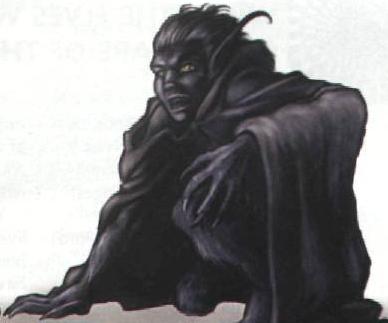 The Gruuwar as presented were almost immediately gone from my head. What I got to start with was that they were a race of rangy, secretive, skinny blue people covered in fur. Going back and consulting the magazine recently, I found that they sounded kind of like obnoxious jerks, and that my own take on the culture was so blatantly contrary as to be preposterous.

My Gruuwar are a race of slight, trouble-averse fey-based people, prone to mischief and theft, tied to henges and ancient stones, as gates and anchors for their teleporting powers. They had a war with the Shadar-Kai (which they lost), and their own little corners of the Feywild, made of over-large versions of common small plants. In my mind, they feel a bit more Welsh or Irish than the more British and French fairy folk of the Monster Manual, but a people that live in those spaces and still need to do things like get food and water and occasionally steal sausages and beer.

This got me thinking about wide races and pocket races. Wide races are those that you use all over a setting. My examples of half-elves, elves, and orcs all fit in that space already – creatures that exist in large enough quantities and over a diverse enough space that they have cultures that are separate from their own cultural stock. I think a setting wants a decent mix of these – after all you want room enough that humans can look reasonably like a variety of human cultures that already exist. Not to ripoff 1:1, but if I want to make an armoured knight who draws on say, French history as their general story source, that’s easy. Harder if I want to make something that’s like Saladin’s guard, or Admiral Yi’s crew. I don’t want to say ‘these cultural overtones belong exclusively to this race’ either – so if someone likes Korean style armour styles, and they want to play an Orc, that means that in the wide spaces where Korean-style stuff exists, there needs to be room for Orcs that can wear that gear without that gear being explicitly orcish.

Pocket races, on the other hand, are great for when you want a culture to be reasonably unified, often around a physical trait that’s hard to explore otherwise. Raptorans, for example, or Winged Elves like the Avariel – if they were widespread, they’d have a big impact in the world. To keep the world looking reasonably the way you want it to and not shaped by these elements, you need to keep this population small, and isolated (hence ‘pocket’).

The Gruuwar – my Gruuwar – are one of my favourite pocket races. They live up in the highlands, they hide behind cairns, and they mostly want to be left alone. One or two of them run around in the Realm of Iron, driven by a want for adventure, and they can be a player option – and even an avenue to introduce strange and mysterious stories, a bridge to the Fair Realm. Also, they can be cute and fun. It’s a culture of potential nightcrawlers, confused by player’s ways, but happy to learn and even more happy to swipe.

But they don’t need to be everywhere, and making them everywhere would disrupt the world to accommodate them.

Learn when to wield these two different ways to handle a culture.