Did you know that you’re bad at estimating odds? It’s true!

One way you’re bad at estimating odds is that you overestimate uncommon values. I could do fun kinds of goofy tricks with examples like words or dogs on leashes and break out the Dan Gilbert playbook, but for now, trust me when I tell you that your brain is very bad at reasonably estimating odds. That means things like a chance for things to happen or a distribution of things. That’s why there’s an actual puzzle to things like ‘guess how many beans are in the jar.’

I roleplay a lot! It’s one of my favourite things to do. I have a lot of yearning for story spaces and I love my friends but I and my friends can’t just interrupt our days to go punch a dragon, so instead, we roleplay and we play in our own little fictional worlds with their own rules. I have a huge pile of characters over the years, and since I have so many, I do what any sensible nerd would do and put them in a spreadsheet.

After all, spreadsheets are cool. 😎 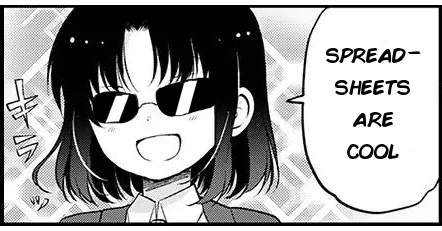 With the shutdown of City of Heroes (and that’s a complicated story now), I took a look at this spreadsheet and did a big crunch, realising that one column in my piles of data I had was pretty consistent. I mostly just made males. I had some nongendered characters, who were robots, and they were mostly referred to as males. At the shutdown of City of Heroes back in 2012, I had a cast of characters that numbered over a hundred characters, and that list was 95% male.

I thought about this but it wans’t until a few years later that I considered this spreadsheet and how I wanted to change that stat. I make characters to play in spaces, and I want those spaces to have cool characters in them, and I want there to be cool women characters in those spaces, and so… why not make more women? Why not write women, especially in the low-key low-impact way of roleplay spaces where I’m primarily playing pretend with friends and not creating a greater coherent text that is going to get reviewed by editors. That ensued a period of revamping some characters that were unused as girls, and making more women characters. In some cases, I even rolled a dice to just check ‘hey, is this character cis?’ because it was a question I’d literally never considered when I’d made them.

Turns out that this fear that I was wiping out my male character population had resulted in a whopping 33% of the characters now being women. I thought I’d gone too far and I hadn’t even gone half way.

One example from a study of women in meetings shows how we handle stats badly. Dudes polled will often believe women have overwhelmed a group when they represent 33% of it; they will believe women talk 20% more than men when they spoke 20% less. And as with me, I thought I’d gone overboard when I hadn’t even finished addressing my massive bias.