There are two ways to approach this introduction; there’s the good, virtuous, but also incredibly self-aggrandising way, where I talk about how the root of all humanity and empathy is an ability to connect things to one another through human interfaces that we would not have otherwise thought to do, and that drawing connections others haven’t seen is what we call genius. Then there’s the meanspirited way which is pointing out that being able to point out how two seemingly unrelated pieces of media are connected is basically the academic equivalent of popping a wheelie and demanding people be impressed.

Anyway, nobody made Gargoyles. 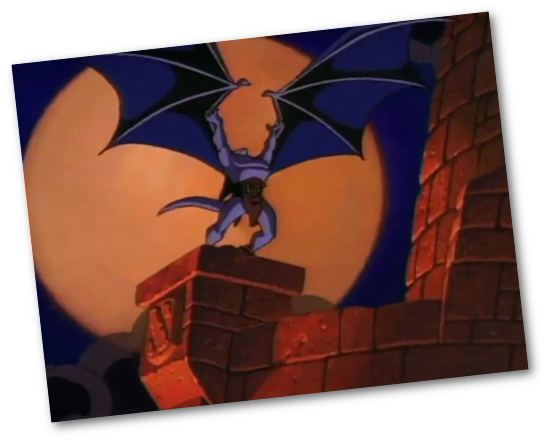 The story of Gargoyles is odd; it’s a sort of long-reaching, continuity-driven episodic epic. Where some series wanted to establish a longer mythology of continuous stories like Robotech and Exo Squad, Gargoyles sort of went for both. Episodes were self-contained, but you’d have a few episodes from time to time that changed the status quo of the series – sometimes in really big ways. It starts in 994, in Scotland, where a castle is defended by soldiers and mighty, supernaturally powerful Gargoyles that lurk on the castles’ stonework. Then, in a tragic but well-intentioned failure, the Gargoyles are cursed – and come to, after much time, in New York City, in the 1990s.

From there comes a story of nighttime guardianship, of protecting humanity, while exploring their own identities. Why are they there? What happened? How has the world changed without them? What does it even mean to be a Gargoyle, without a tradition to hold to? And how are they to respond to the way humans treat them? The show blends together ideas of Batman’s night-time defenders and yet also the X-Men’s world-that-hates-and-fears-you ouvre, and does so with a surprising sense of maturity.

Gargoyles was a Disney animated TV show created in the wake of and as a competitor to Batman: The Animated Series1., an effort at which it failed. Nonetheless, for two-and-a-bit seasons, Gargoyles presented a fascinatingly mature, dark and gothic story that nonetheless fit in the Disney brandings’ parameters of what a story could be about. There were no explicit Thou Shalt Nots violated from Disney, and some of the things this series was about still carried that Disney Overtone – a character being shot with a gun was directed to not show blood, to not show the moment of gunfire.

That’s what the series is, though I want to also underscore this is an adventure hero story about shapeshifting monster people and includes at least one stone-formed monster dog that was the best boy. It’s a series full of heart and character and had a lot of daring ideas including at least one character who was coded queer with intentions to follow through (though, alas, nothing came of it), along with messages about gun control, violence as a solution, promises, power, and racism.

And nobody made it. 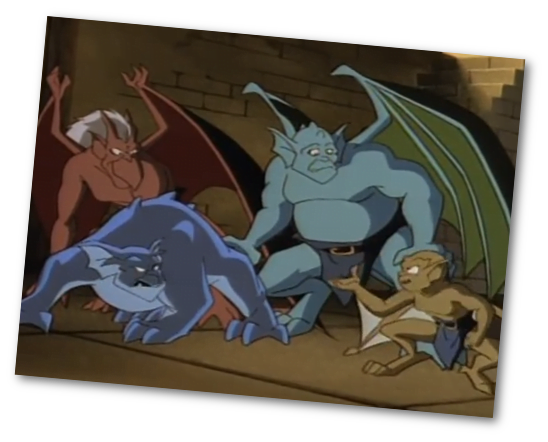 The idea of the death of the author is one of your modern starter-level concepts for the basis of media criticism, an idea that’s so overwhelmingly well-distributed and well-spread people now reference the phrase as if it explains itself. It’s like shot-reverse-shot in film techniques or in media res for storytelling, something that has become part of everyday jargon. What’s fun with everyday jargon is asking someone to explain it. You find all sorts of interesting things that way, like sometimes you find people who are supposedly critical writers don’t know that ‘death of the author’ refers to an attitude or a position, rather than like, a coming end of the idea of people writing books.

The idea of the Death of the Author is, as simply as I can put it, that the author is not the absolute authority on what the work means. If you want a looser phrasing, something more generally applicable, how about nobody is an absolute authority on the meaning of a work, not even the creator. Barthes referred to the tyranny of interpretation – the idea that without this principle, there’s always going to be a view of a single, absolute perfect meaning of a work and the only source for it was an author of the work.

This idea – of work freed from its point of conception – is a super important concept for marginalised people, by the way: Lots of work you love was made that was antagonistic towards queer people, was made by racist people who were at best apathetic towards the experience of nonwhite people, and so on down the many intersections. Barthes’ essay decouples what an author may want for a work and puts the tools of interpretation equally in your hands. Everyone interprets by their own experience – and the person who made the work has that experience to interpret by.

Still, we’re not actually interested right now in what Death of the Author is, we’re interested in where it came from, because it connects, in a really interesting way, to Gargoyles. 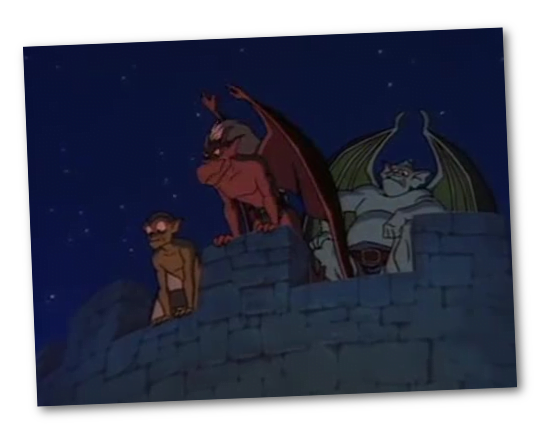 One of the groundings for Barthes’ idea of the Death of the Author was the movie, because a movie was too much the product of too many people, working at the same time, for any given work to be considered having an author. While Roger Ebert argued in the 1980s that movies’ directors were ‘the authors’, Barthes, twenty years earlier, was arguing that the no such singular vision could be purely expressed. There were too many people working on one project, every actor, every prop person, every scene painter and blocker and camera handler – the director may have coalesced the movie, but they were only trying to get moving parts to actualise what they wanted, and in many cases, things changed in the process of making. The director at the start of a movie was not the same person they were at the end.

Gargoyles is really good. If you look at the voice acting cast or the episode authorship lineup you find a cloud of names you’ll recognise, especially if you’re a Star Trek fan, and the writing staff is similarly studded with the workhorse authors of the time. The DNA of this show is shot through with the culture of the time – shows like Ghostbusters and Batman: The Animated Series as well as Trek novels, classic Young Adult Fantasy, DC comics and the Smurfs all intermingled in the work. Crucially, though, Gargoyles wasn’t a work where we point to it and say ‘did you know [Big Name] worked on it?’ like we do with Exo Squad.

No, Gargoyles is fascinating because by all accounts, we’re not actually sure who really created it. It wasn’t a singular vision, though it was the result of some collaborative work and shared ideas – and most of the people who worked on it had been handed a concept to work with, but we can’t cleanly point at this person is the creator. What’s more, we can point to the people who were close to the conceptual start of the series, and find out that not only were they not the creators, but what they envisioned with what they were handed was something else.

Gargoyles is an amazing series. It’s a great series.

And it didn’t have an author.

1. If you’re at all curious why Bruce Timm isn’t particularly complimentary of Gargoyles. Or it could just be Bruce Timm being a bit of a dick.