Yoshi’s Crafted World is, well, it’s a Yoshi game. It’s a Yoshi game, made by Nintendo, and that means that there’s a part of my brain with a groove worn into it where this game locks a strange mechanism that means that I’m constantly in mind Yoshi’s Island, one of the best console games I’ve ever played. As I write this, I’m hearing the music from the game – but not Crafted World, the music from Yoshi’s Island. It’s part of me.

I’ve talked in the past about how much impact Yoshi’s Island had on me as a player, but I also know that being A Yoshi’s Island isn’t enough to pollute my common sense and leave me unable to rationally examine a game, because the game Yoshi’s Island DS annoyed me a great deal for Not Being As Good as Yoshi’s Island. 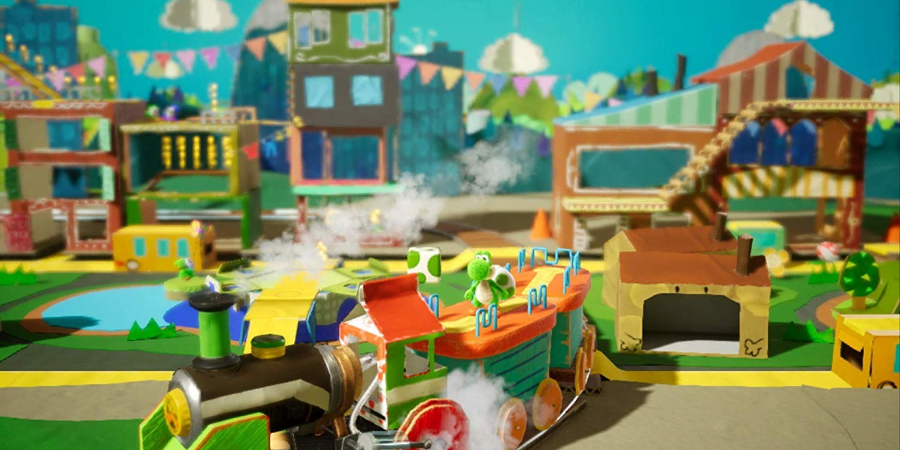 Yoshi’s Crafted World is pretty much a typical linear platform game. Some games of this genre have more vertical space, maybe with the game built around feeling like you’re climbing up or down a tower, but in Crafted World, the whole thing is very much a linear exploration from one side of a space to the other, running along pathways arranged in different planes in videogame levels.

This means you spend your time running and jumping and doing Yoshi things like collecting enemies as eggs, hucking eggs at things, collecting coins and flowers and hearts and getting through these wonderfully videogamey levels. It’s great stuff, in the most basically positive way – like, if you want a unit of Videogame Experience, Yoshi’s Crafted World is a polished, prime grade, nearly perfect Videogame Experience. 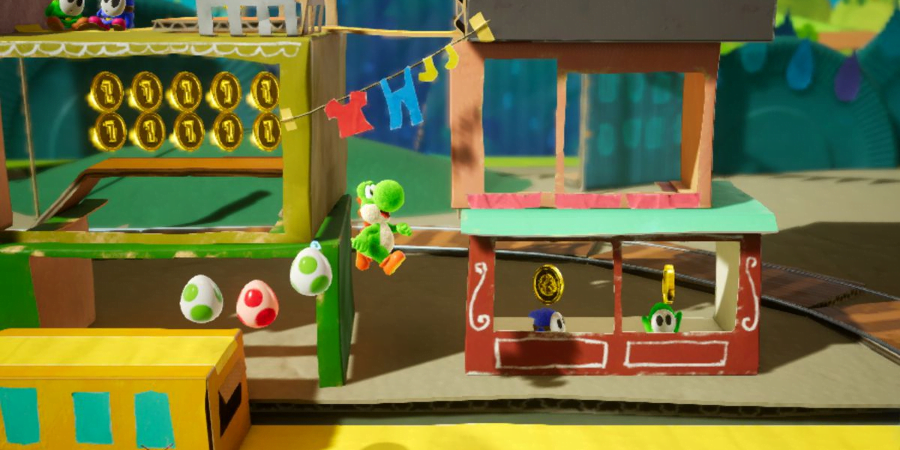 The reason for the linear flow from one side to the other, with less verticality isn’t because of some kind of devious plot to avoid level design. It’s because every level has two different play routes, played as a platformer course one way, and as a hide-and-seek timed game the other way around. You finish the level to unlock the next level, but once you do that, you can go back and play the same level again, trying to find three adorable sorta-dogs, doing the level backwards – literally. You flip the whole level around, and all the obstacle course stuff you saw from one angle, you now see from the other side, which includes different mechanics and solutions – a tower you climbed is now a sharp drop, for example.

It’s a really joyous world to be in, particularly because woven in amongst the shyguys and pirahna plants, the recognisably familiar iconography of a videogame is the construction of other familiar objects into the levels of this videogame. Levels are made up of string and cardboard, spikes are shiny because they’re covered with tinfoil.

Nominally, there’s no real reason to care about spoiling a play-experience platformer like this, but I feel like showing you pictures of the later levels in Yoshi’s Crafted World runs the risk of spoiling some delightful moments when you work out just what your level’s been made out of, or what a particular monster is, when you look at it right. You might miss the moments of Shyguys leaning against one another and having a quiet happy sigh, or the yell of laughter as you pick up a dinosaur skull, or realise one of the handcrafted level components is a solo cup. 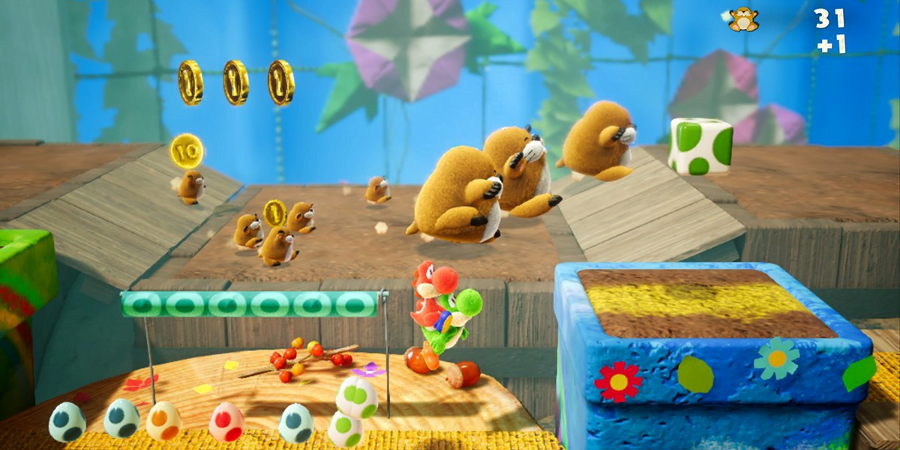 The essential game is still just a Yoshi’s Island game, and it’s got a bunch of levels – real good levels, mind you – and then you’re left wondering if there is some sort of central mechanical consideration, some expansion of the game’s formula? Is there some question this game asks that Yoshi’s Island does not?

For anyone who’s not familiar, Tyrian is a 1990s top-down shareware shooter that I and basically twenty people loved, made by Epic Megagames in their Runny Gunny Shooty Bunny phase of things. The thing Tyrian had going for it was a two-player mode, where one player could dock their ship to the other’s, and instead of controlling their place on the screen, they could now do targeted trick shots and control secondary guns. It was a great game and I love it to bits.

Co-op Yoshi’s Crafted World is like Tyrian, and then some. One Yoshi hops on the other Yoshi – at any time! – and then can become an egg turret, making some levels into this breakneck dead run of snap shot snipes and fluid jumping between two players, with tricks like being able to catch a friend, then spit them to safety, then they catch you and spit you to safety.

I don’t know how good this feature is for anyone else, but I predict this much: The two-player hundo speedrun for this game is going to look sick. 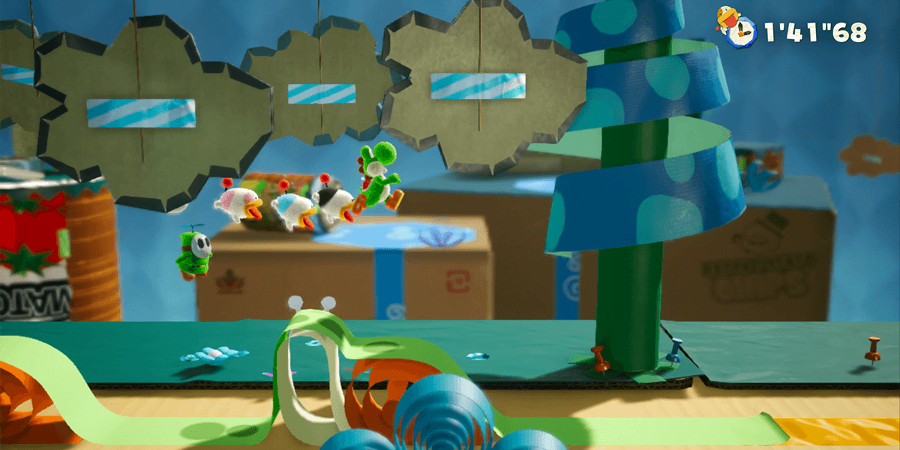 The crafted world gives everything this really fascinating materiality, but it reminds me of something that I wonder if it might be just a bit too unique for me?

Back when I was a little kid, I used to draw videogame levels. I used to get a notebook and just draw a platform of a slowly sprawling videogame space with jump pads and puzzles and switches and I just  drew this without any clear idea of what you’d ‘play’ through these levels. Once, I even made a cardboard field for one of these levels, like a top-down level for a top-down shooter game. I never really did anything with these ideas – they all drifted away as I got older and left behind that time.

Thing is, looking at Yoshi’s Crafted World I imagine what it would be like to have a life where I got to make those levels. To have the long strips of tape and the turrets and the pots, to be able to visualise and ‘run’ my little toys through that kind of level, through that kind of design. I imagind how exciting and wonderful, how sparkling that life must be.