Yooka-Laylee is a collect-em-up game, in the vein of Psychonauts or a bunch of other games I haven’t played. It has a particular aesthetic, that singular form of storybook cartoon character, where people you meet are almost always some variety of pun. You travel around the world, you get the powerups, you collect the things, you solve the puzzles, and you win the game, at some point, I assume, concluding with a sort of tedious inevitability. 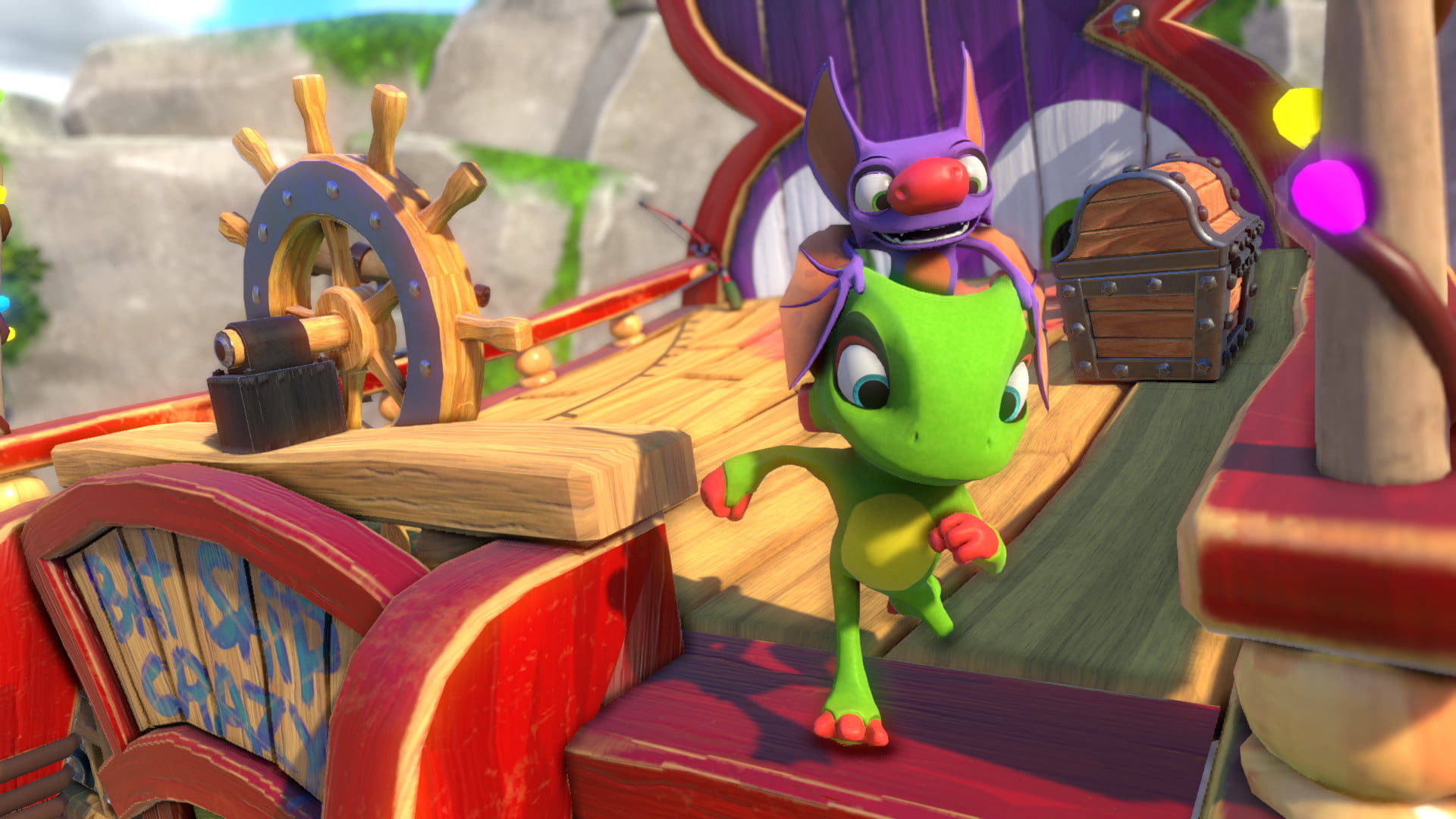 I’ve started writing this article about twelve times now, but I just stop, like I’m sliding off a waist-high invisible fence.

It’s not even that Yooka-Laylee is a bad game, I wouldn’t call it that. I really liked just randomly hopping around on Yooka with their charming little roll mechanic, bouncing and crashing onto things. I liked scrabbling around buildings and I liked the way you could just find odd things around the place. Then the game did something like hold up the game to give me an explanation for something and I alt-tabbed to check my email. 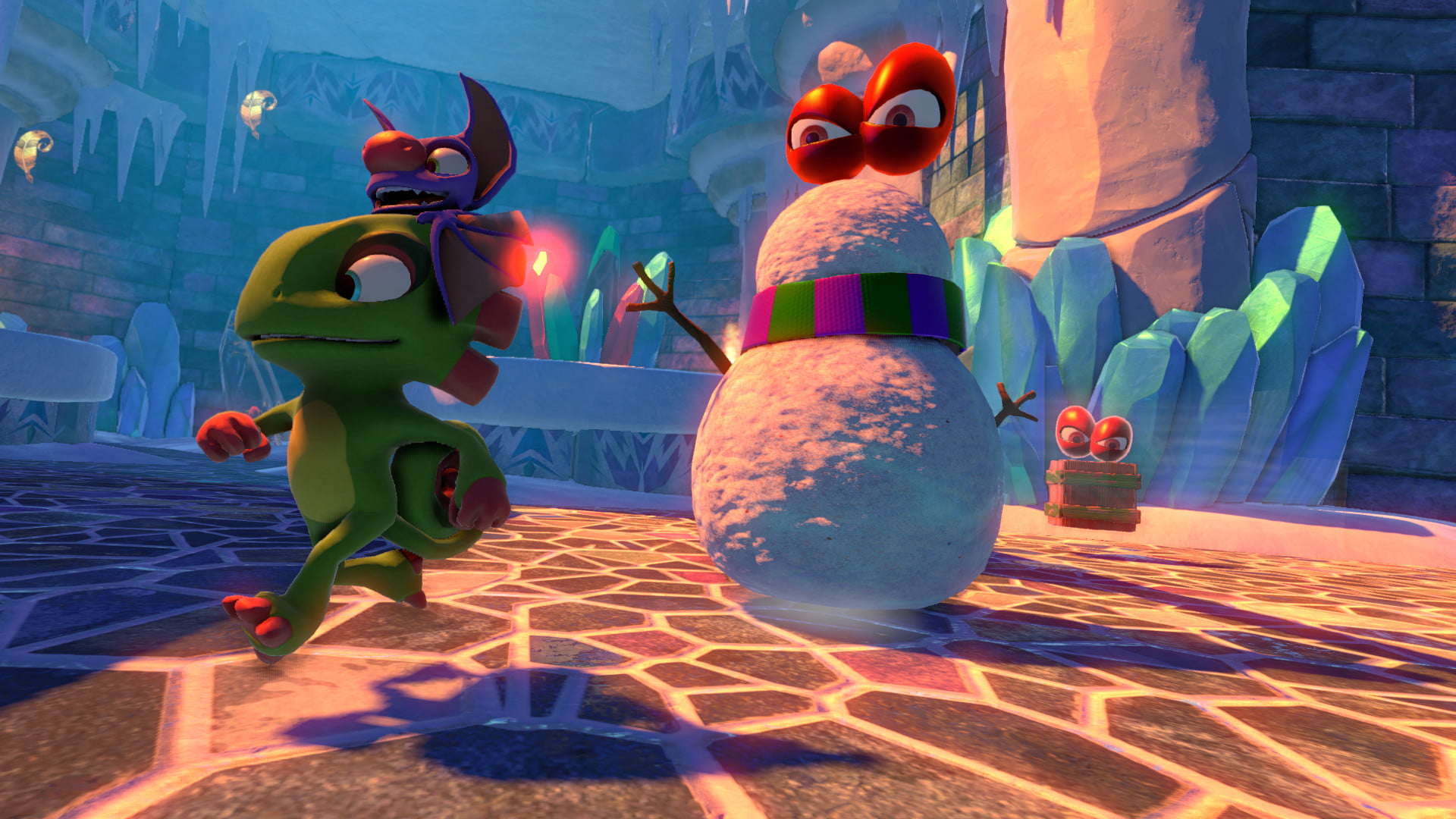 Straight up, this game looks really good, and it does a lot of aesthetic things I like. I like the level transitions, where rather than try to fold one huge level together, the game is happy to divide things into discrete chunks and try to keep you from seeing unconnected problems as related. I like the way Yooka and Laylee talk to one another, and I like the way everyone’s a pun. I like the camera (!), and I like the voice acting being garbled nonsense sounds.

I will almost always stand for garbled nonsense sound speech.

I don’t want to say Yooka-Laylee is a bad game, but it’s definitely a game with some problems. The way it’s spoken about online show there are some problems. For some similar titles, it might be the racist jerkhole brigade mad about the game ditching on garbled voice-acting nonsense from a racist youtuber that moved the needle on it, but lots of people are down on Yooka-Laylee and have almost no unifying reason why. When a game is bad or broken, most people can explain why it’s bad or broken, but there are as many vague reasons for Yooka-Laylee’s discontent as there are commenters.

You might remember me at some points using the term a mile-wide pie to describe a thing that’s simply too large to have a singular characterising quality, and yeah, for an indie game, Yooka-Laylee manages to have that scope. It’s certainly big enough to be bad in lots of different little ways. Still, I wouldn’t even say that the game is really bad – it’s just easy to stop playing. It’s easy to just not care.

I do think Yooka-Laylee, ten years from now, is going to be a game some up-and-coming designers devoured. It’s big, no, it’s vast, and it’s the kind of game, that if you’re just going to kill a few hours focusing on one game, without any concerns or doubts or distractions, it’s probably great. There are so many little subsystems and things to find and explore. But for me, the biggest problem of the game is a sequence of small irritations that meant I didn’t want to play any more. My time is precious. I don’t have a lot of it to butt against inconveniences. 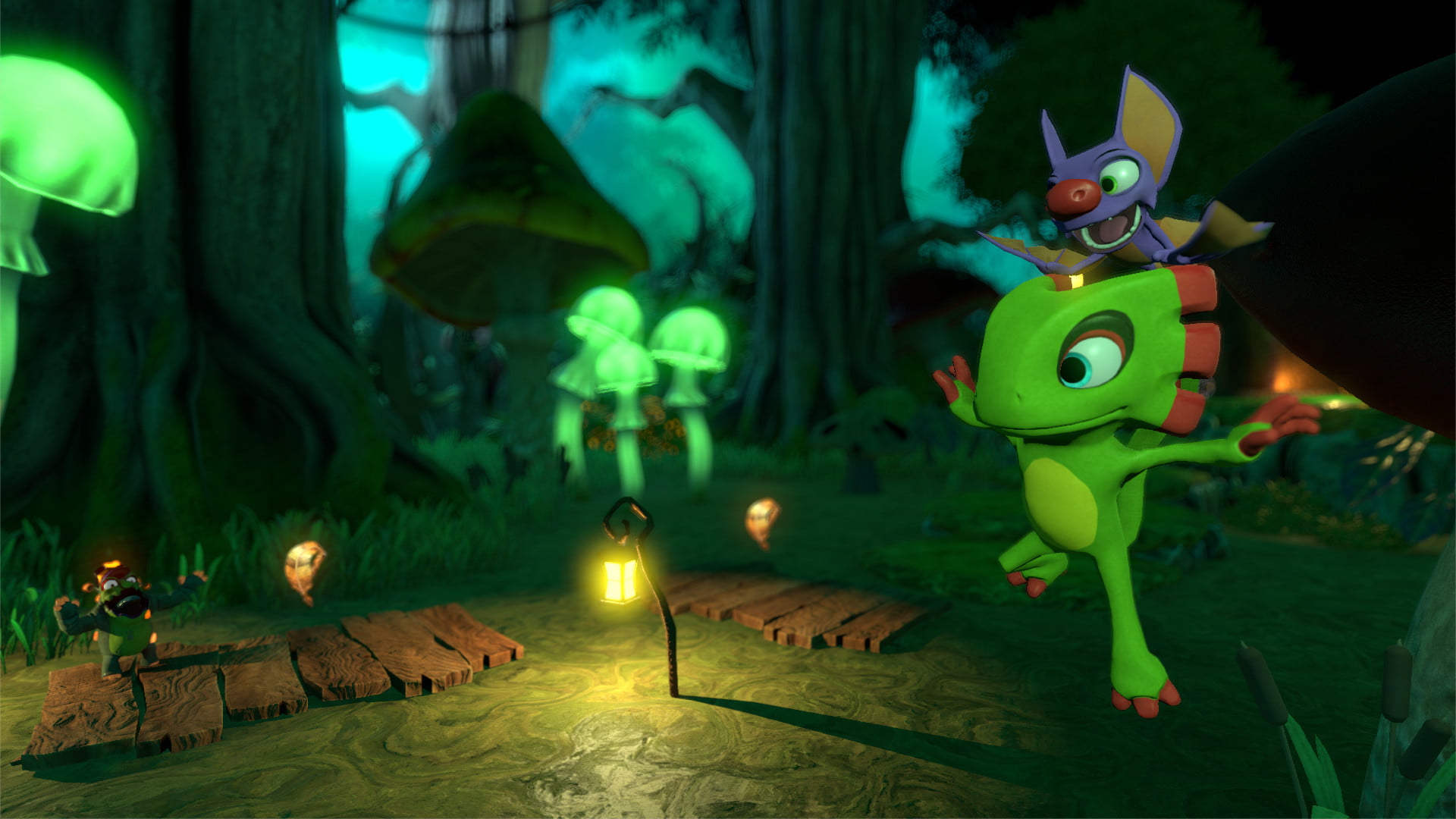 Let’s talk about ramps. The idea of a ramp is a pretty simple; it’s a gradiated climb where the effort of going up is distributed out, so it’s a lot easier than just jumping up to a higher level. Ramps are also a useful metaphor for describing systems that are designed to get you up to a higher level of something without necessarily being an obvious effort. Most videogame boss battles are the culmination of a ramp of the rest of the level – you’ve learned the tricks for fighting that boss in the proceeding play of the level, for example.

Games are full of ramps. One of the most common puzzles we learned to make in platform games was to show us something out of reach from one side, then let us go on a longer path, that raised slowly to get to that inaccessible thing. The infamous difficulty curve, or engagement curve, or ‘play conditioning’ if you’re that kind of person, is a ramp. You proceed along and the process of procession (haha) makes you better at the game in ways you didn’t understand or expect so you can handle later-game material.

Games as have onramps and offramps. They’re both important. An onramp is a way the game gives you new stuff, a way to approach a new system. Sometimes it’s by making something you weren’t paying attention to important, like how in Doom, the ammo system –

of course I was going to bring up Doom

– is shown to you, right on the interface, but you don’t actually do anything with it until you’ve unlocked a few weapons and are facing a variety of monsters.

In Yooka-Laylee there are a lot of really abrupt onramps. The game wants you to know about the unlock system, and pagies, and Trouzer’s unlockable systems, and the currency to use them, and your energy system and how to swim and duck, and all of this tutorialising is done back to back, without much room to breathe. This would seem a virtue – I’ve complained about games faffing around after all – but in Yooka Laylee, everything it wants to tutorialise, it hits you with at once, quickly. When you’re introduced to races or collect-em-up things, the game just jerks to a halt and tells you about it, usually from a fixed camera and dialogue box. 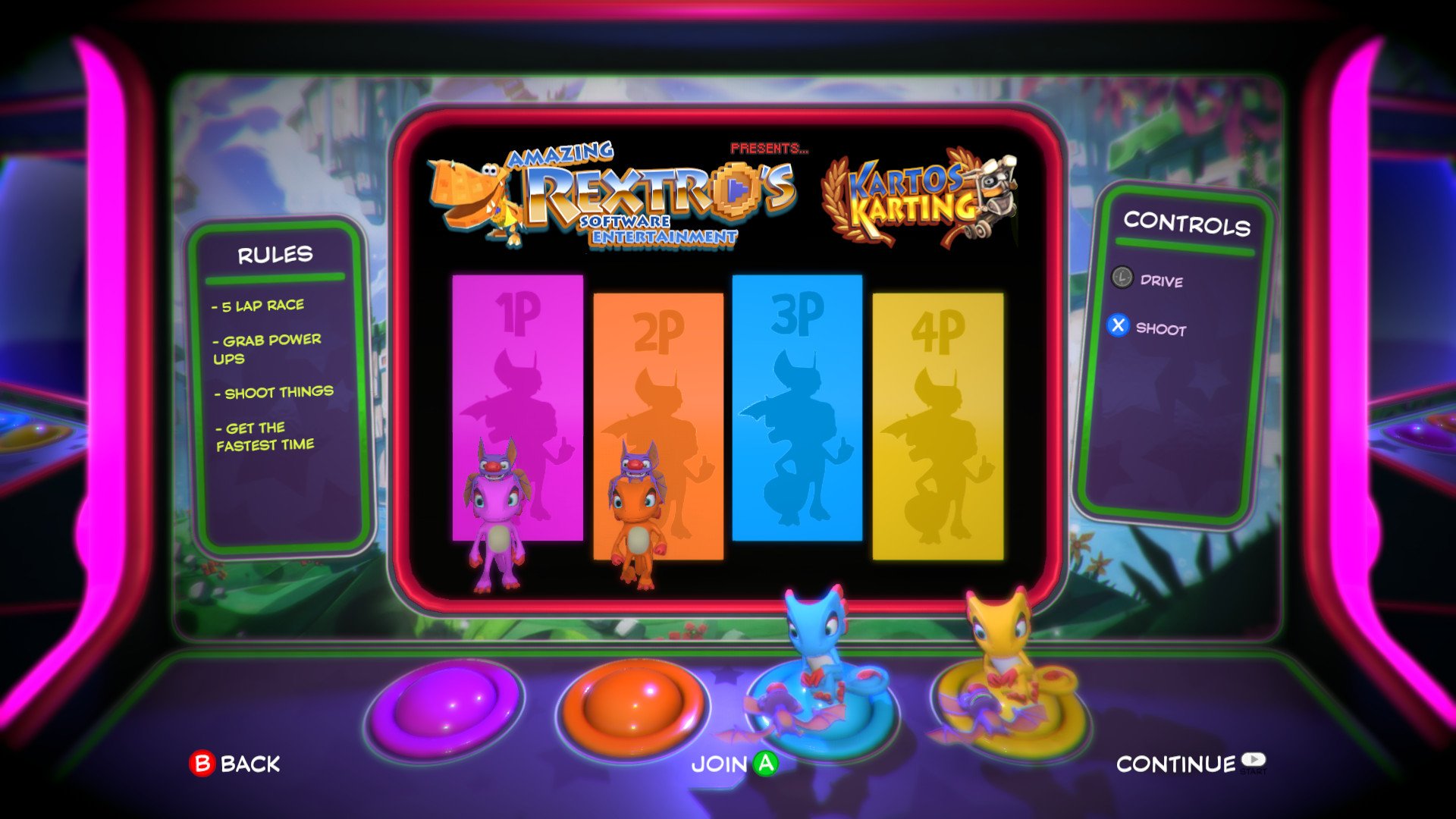 It’s a game filled with small, annoying instances of resistance, and when the game jerks to a halt so much in the early game, it becomes really easy to take the next sign of resistance as a time to get out. What’s more, those resistances could come in the oddest ways. The controller won’t kick in if you press the keyboard while it’s loading. The ‘quit’ button is in the ‘options’ part of the menu. The mouse controls are ghastly. There’s a pig whose name is a fat joke.

There are a lot of unhappy reviewers, who will say the game lacks heart and soul, or that the game is tedious. I don’t honestly buy it – I definitely felt that this game had a sense of soul to it, it certainly had its own personality.

There are lots of people who want to say the problem of Yooka-Laylee, and they may be right. I don’t think they’re right for me, and I think my experience is most useful for me for designing and making other games.

I think Yooka-Laylee’s problem isn’t heart, or soul. It’s that it’s a game full of plateaus, with very few ramps. There’s no graceful step-out points, the game even makes quitting annoying, which makes stopping play abrupt and a reminder of an under-polished part of the game. You can’t force a player to swallow the strategy guide in the opening thirty seconds, you can’t make them fall in love with your game by front-loading it. The solution to a twenty-hour game in a half-hour-playtime world is not to try and wedge it in.

In the end, I had fun with my time in Yooka-Laylee, but it wasn’t hard to stop. Every time I found the slightest bit of resistance from the game, I’d just drop it for a while.

Eventually I stopped trying to not drop it.

Yooka-Laylee is available on Steam and GoG.