In World of Warcraft, you can reliably expect that your character has reasonably recently been sent out to the task of handling something’s poo. 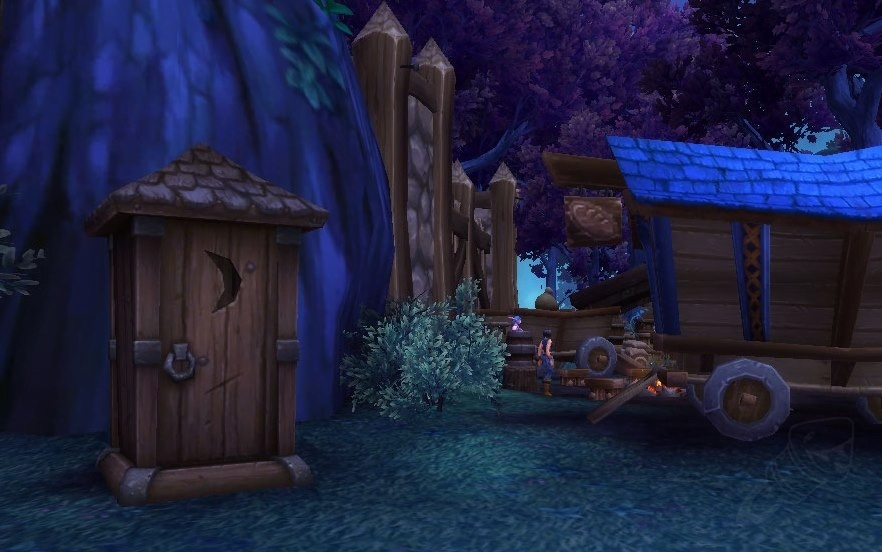 World of Warcraft is a videogame, a Massive Multipalyer Online Roleplaying Game that, statistically speaking, if you are reading this, you have played and also, statistically, you are not playing right now. It’s a piece of gaming history and landscape and culture all at once – something that most people involved in videogames and game studies knows about, has opinions on. It is a common metaphor, a Game of Thrones event every time an expansion drops, it is the backround radiation of the MMORPG community discourse, even as it has been outmoded and replaced. Last year, an entire fuss was made about World of Warcraft opening up a service that let you play the game as it was ten years ago, and that ‘behold an old game with less worse stuff’ was a news cycle for months.

But it is also a content platform. People log in to World of Warcraft to spend that day reading stories, or engaging in combat against other players, or accruing resources, or managing crafting or manipulating markets, and all that stuff was different types of content.

There’s this enduring line from Marshall Mcluhan’s Understanding Media that The Medium is the Message. It’s a oft repeated phrase because it sounds kind of meaningless outside of the conversation it’s from, and that can be used as a confusing sort of wedge to force the conversation open. It’s a ramp of a phrase, a line that helps introduce the idea that it needs explaining.

The idea it outlines is that medium is the thing that really changes the world. We talk about the idea of works of art transforming the world, but seldom about how the task of displaying that art transformed the world first. The impact of a painting is hard to compare to the impact of the museum made to house it. Television shows and videogames may be fantastic art, but isn’t the deformation presented by everyone having a TV and then everyone having a phone the greater impact on society at large?

It is in this regard that World of Warcraft, a game, is perhaps best viewed as instead a platform for the delivery of content. There’s a host of different voices and different kinds of content being put into it, and you can extrapolate how those things relate to one another and learn all kinds of things based not on the work of any single piece of content, but rather, the trends of content. How often does this story about a conflict between two parties get interrupted with a greater common interest? How often are two sides presented as equals in the conflict despite one being a slave-keeping colonist and the other the victims of mass mind control? And, as is pertinent here, how often does this game present you with a chance to handle poop?

This was going to be a video.

This was going to be a video, but the project outgrew what I could meaningfully and easily do in ten minutes. It went from being a short little idea that I could present as a series of shots, cutting from quest to quest in the narrative in World of Warcraft. Maybe even play through it, arc to arc, a character progressing from level 1 through to level 120, but that is hundreds of hours. When the idea first occurred to me, I went checking, and found that those blessed folks over on Wowpedia have already noticed this trend, and presented a comprehensive list of those quests. This is not a comprehensive list, per se, though; this is just a set of quests which relate to directly clicking on or moving around poop. There are other quests, such as is presented in Cataclysm‘s Mount Hyjal zone, where one of the quest givers is a magician trapped inside an outhouse, for poop related reasons. This is therefore, not a perfect sampling of poop quests per se, but it’s a good overview. 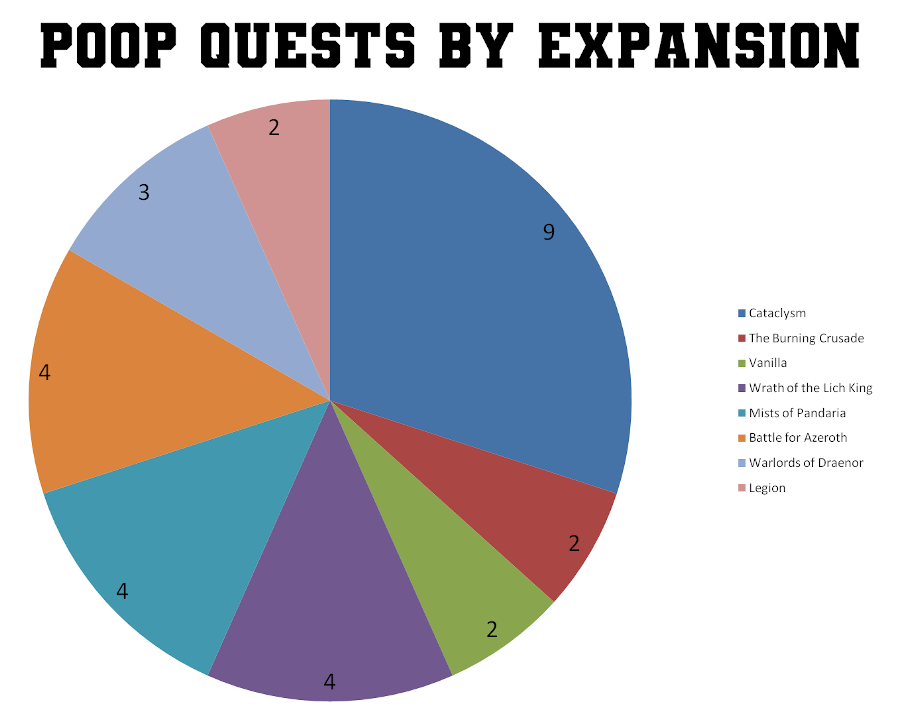 Some questions then: Are the Poop Quests concentrated? Is there a single place in the story that is particularly poopy? Well, the good news is, we can chart this stuff. Over the years of WoW’s lifespan, there have been poop quests in every expansion, and it’s always more than one.

This is particularly strange, because the nature of an expansion in WoW is when your boundaries and limits and the worst monsters you could fight, in the last expansion, are suddenly outmoded; narratively, there’s some side-eye to it, where you kind of ignore that you hit a level cap and then moved on to another zone where the mundane problems compared to the end-of-expansion problems of your past. Yet in each of these new expansions, in a new time and a new place, you’re introduced to some quest that is literally one of the most mundane, least heroic tasks people do. And it’s always contextualised as somehow worth your time – magic or money are the usual excuses.

But World of Warcraft keeps on bringing you back to sifting through something’s poo.