Okay, let’s clear up something I didn’t know when I bought this game. It’s not a visual novel, that vague term we use to describe a particular style of game with some choices and narrative, a sort of light, eroge-heritage RPG storytelling game. World End Economica is a kinetic novel, a strictly linear progression of text and images.

This makes reviewing it slightly challenging, because the argument about whether or not it is a game is an interesting one academically and unhelpful indeed socially. As it is, World End Economica is such a singularly focused experience, telling you that it’s technically a game isn’t a super helpful recommendation. As it’s such a pure narrative with a primary form of reading, it seems to me best to talk about the game as a story with a particularly interesting delivery method.

With that in mind, it’s a tiny bit of a deviance here; while this is definitely a Game Pile post, it’s definitely going to be reviewing this as more of a book or a movie than if I was going to recommend it as a game. Will that make a huge difference? Well, probably not. Anyway!

World End Economica comes to us from the pen of Isuna Hasekura, though I am resistant to simply say he wrote it. Hasekura is described as writing the scenario of the game, which seems a precise enough outline that one should respect. If you’re unfamiliar with Hasekura’s work, the most prominent thing in the resume you’d recognise is Spice And Wolf, an anime that was noteable for making a bunch of my friends into both furries and economists.

The principles underpinning Spice and Wolf were that you can spin interesting human drama about interactions between people and their lives in the context of economics. It also does this while telling a story of understanding humanity as an outsider, about growing love and affection, about common interests and personal values and how you can have two people grow together in a sophisticated, adult relationship that also deals with and reconciles a lot of complex interactions with the adjoining cultures around them. It was also extremely good, and I have to take other people’s word for it because I still haven’t watched it or read it or whatever.

The point is: Spice and Wolf is a very reasonable thing to look at and expect that the same creative pen would produce a really excellent kinetic novel. After all; a kinetic novel is a nice mid-way point between a light novel and an anime. You have a small number of images, you can show characters off in a variety of different poses and styles, but you don’t need to do full-blown animations.It’s a different genre, with even a different form of cinematography, but it’s still something that would allow a primarily written narrative to flow fluidly.

There’s also the fact that the game – as a kickstarter project – was advertised primarily as a story about economics shortly after the fast formation of a human civilisation on the moon. It’s a story about space stock market on the moon, framed as one boy’s ambition to try and find a part of the world, a distant start or planet, where he could be a person who set his foot down somewhere new.

I really like the kinetic novel as this mid-space for an anime. You can treat it episodically, you can save your budget for single large, splashy scenes – there’s a lot of interesting potential there. That’s your rudimentary outlay: It’s connected to a good creator, it’s a format that would benefit from having that creator, and it’s a creator who can do good work in a genre that focuses on economics.

I don’t want to mislead you; I checked out of World End Economica quite early. I didn’t finish the story and I don’t think that that’s anything to be embarassed about. The nature of a kinetic novel is it’s a narrative that wants to engage you, and World End Economica simply didn’t.

On a technical level there are just some flat-out bad choices. There are a few places where translators chose to simply duplicate text without noting where the line breaks would happen, meaning that you’re left with a few instances of Crash Blossoms – places where a component of or clause of a sentence drop their context and form on a new line that leave you confused as to meaning. There are points where that rudimentary cinematography isn’t very good. Numerous points where an entirely black screen is contrasted with a description of advanced parkour. 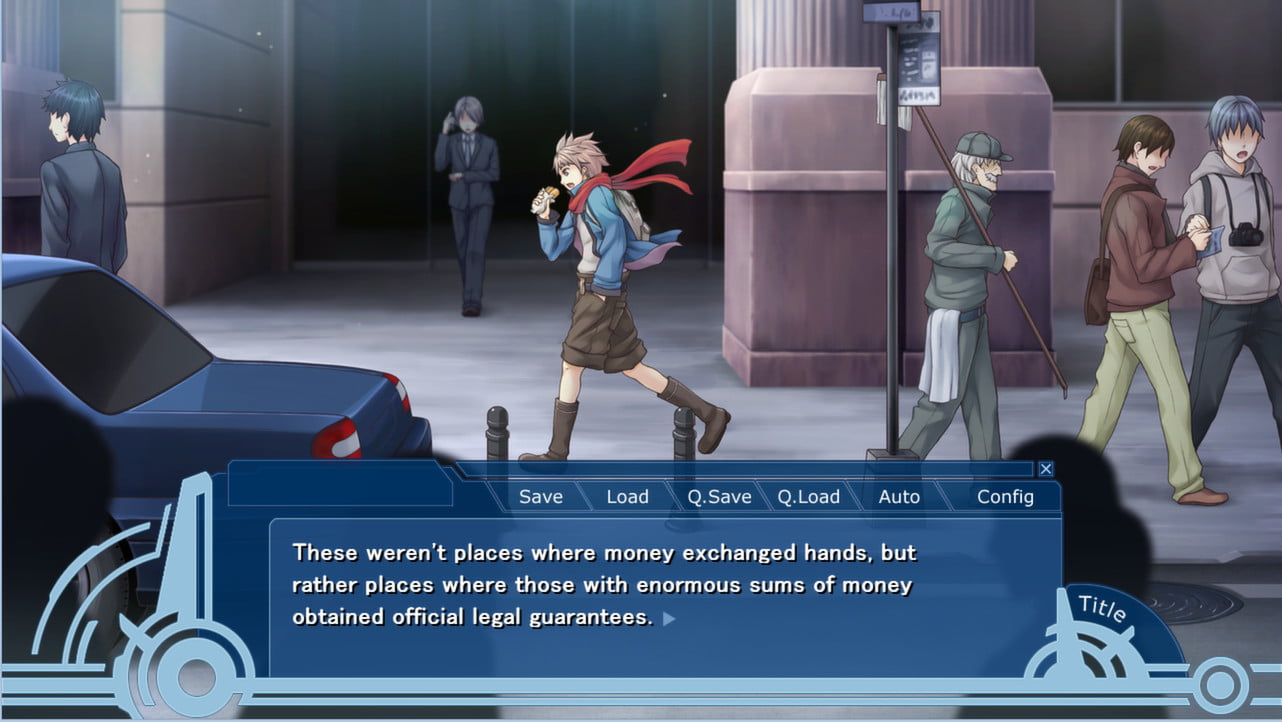 Yet, action isn’t crucial to a kinetic novel! What’s much more important is character – and Kinetic novels are fantastic at introducing you to, then including you in the life of these characters. So much of the story can be executed in the mind or the inner dialogue of characters, in shifts of expression, combining the comic book panel’s ability to cram visual detail that’s designed to be examind closely with the depth of a novel, complete with the ability to flip back and forth and check for information. It’s perfect to really sink in close with characters and listen to their views and their mindset and even the process they follow when they do come to think about one another.

Problem: The main character is an unutterable pain in the ass. 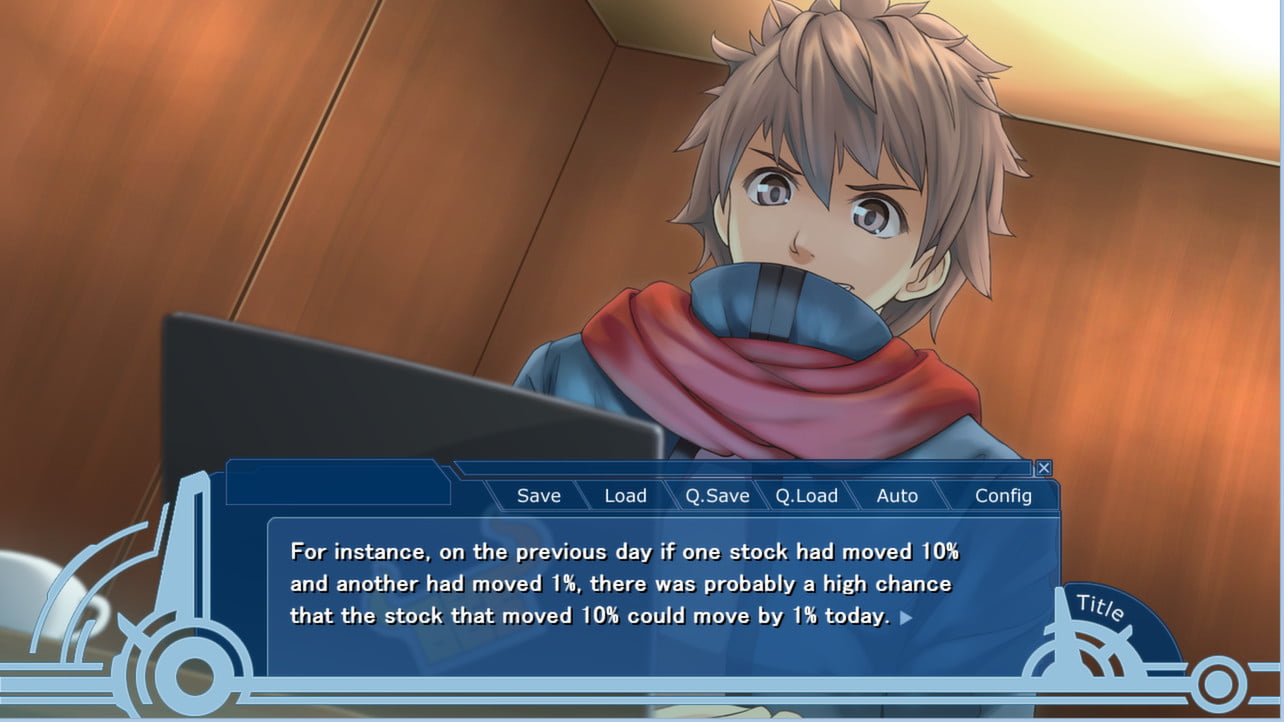 I don’t just mean generic ‘bit of a protagonist’ pain in the ass. I mean the main character establishes that he is, in fact, economically fine, and loved, and he ran away from home because he wants to be rich. He explains that he respects people for being good capitalists much more than he respects them for being kind to one another. He’s a flat-out misogynist. In the first chapter, there’s almost nothing the character does to make himself likeable, or interesting, and the fact that I’m inside his head means I’m reading his inner dialogue.

That inner dialogue has one of the worst elements of this game, too: he spends his time thinking as if someone is listening in to his thought process, and justifying his world. The way a sentence is structured, he’ll interrupt a thought to explain a setting or world-building detail rather than finish the thought then move on.

This feels like a translation problem, by the way; it’s possible that the translators just didn’t do a great job splitting up the ideas, which means the character reads like an inexpert fanfiction so desperate to barf into your mind all the details they bothered to work out about their setting they weren’t able to accurately convey the world by showing it. You have to work with what you’ve got to work with, after all. 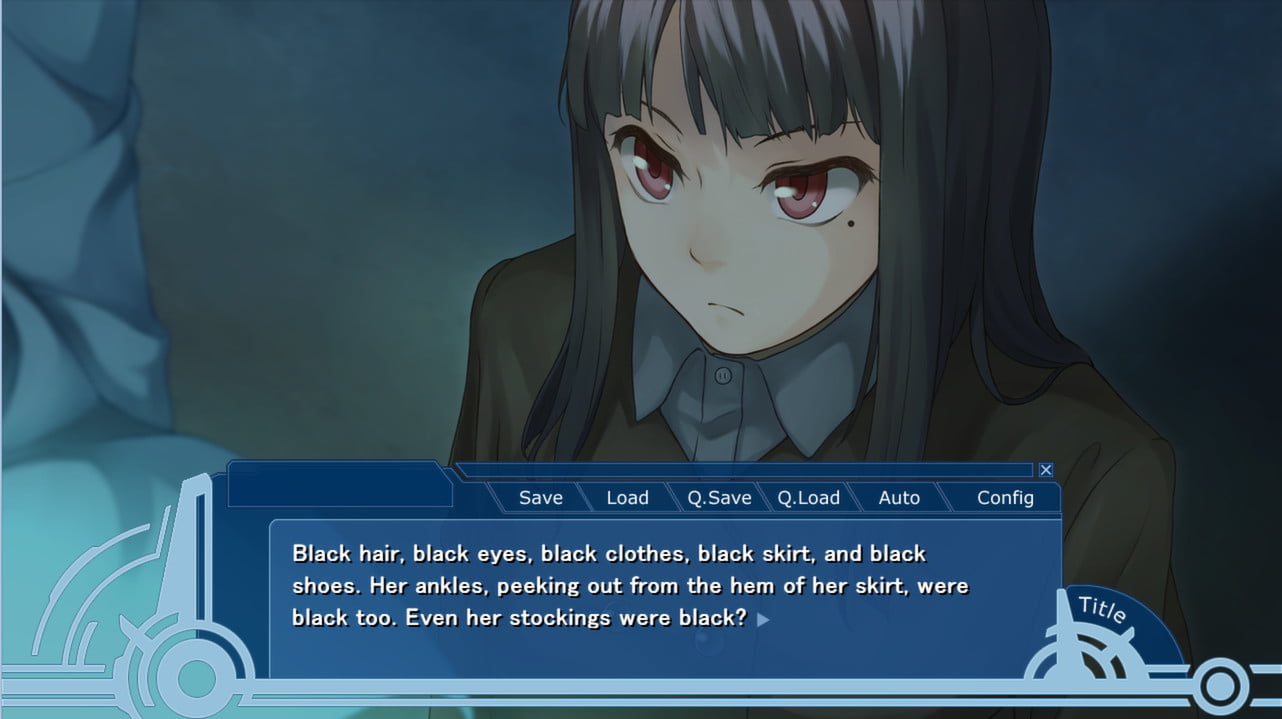 I checked out of World End Economica super hard, super early. Like I don’t think I made it a quarter of the way through the first chapter – holding down the spacebar and going through it, I realised quickly, this was a story that was wonderfully invested in its idea of what it was about, and didn’t ever bother to think about how well it showed what it was about.

In the end, this is a decent kinetic novel, but it’s not a good one. It’s like a really small, reading-heavy anime you can buy fairly cheap, and if you’re an absolute sucker for the work of Hasekura, and need more, and don’t mind a character who just randomly spouts off ridiculous misogyny, and don’t mind that his main foil is presented as a Catholic and and you don’t mind a p-p-panties moment in the first episode, then I dunno. Maybe give it a shot.