I went on a bit of a rollercoaster with Usurper.

First, I backed the game on kickstarter because it had some very modest targets, and a nice aesthetic, and stated it was using Gamecrafter. I thought it looked like a very good early effort for a game designer, backed it, and forgot about it for a few months.

What arrived was, as a game, a really robust little draft-position-play kind of game, with a thematic space I can only describe as ‘excellently obtuse.’ I had a look, I considered how I was going to approach talking about this game, and I put together a little list of thoughts that I laid out in the template for this article. As part of doing that, then, I went to get my due diligance and the links to people’s works, and places where you can buy the game, and found, to my surprise… 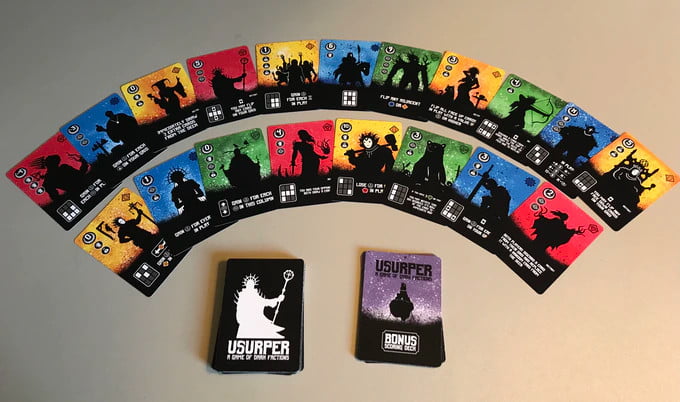 In Usurper, you start by drafting cards, then once you’ve drafted cards, you put those cards in your tableau of nine cards. Some cards let you turn your cards face down, or mess with an opponent’s tableau. Cards are from one of four factions, have a number of attribute symbols, no meaningful name or identity beyond their silhouette, and have both limitations on where they can be placed and effects when they are placed in your grid. So far, so good.

The questions I asked when I played this game for the first time, when I looked at the product in my hands, then, was:

I have no answer for these. They look like mistakes to me, mistakes that you make when you’re too close to a game and filtering it through your experiences. The symbols and communication with players who don’t have an existing familiarity with the game sure looks like something you’d see in the first few blind playtests. It’s the sort of thing that a student would pick up early. 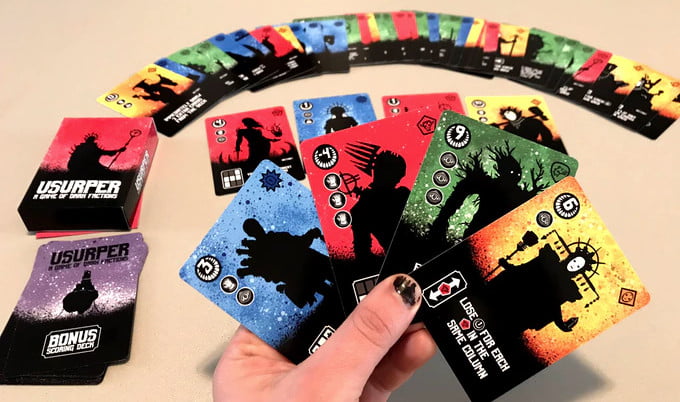 This is a real crowdfunding surprise. It’s not unheard of – some kickstarter projects really are one-and-done. And it’s possible that Usurper was always going to be a limited run game, or it’s in negotiations right now for a publisher deal, or that there was a change of heart or circumstances, or all sorts of possible explanations, none of which are bad. It’s just that suddenly, it changes the texture of what this game is.

I never wrote a review of Farmageddon or Hocus, for a variety of reasons, and one reason why was because the games weren’t available any more. They were interesting artifacts, they were games that were interesting, but they weren’t products available on a market.

That’s weird, isn’t it? I mean, I talk about how I don’t want to treat games like they’re products primarily for a marketplace. I call this lawnmower language, remember? Is there something amiss there?

I think part of it is an inflated sense of my own potential. After all, I think sometimes when I talk about an indie game, my advice, my recommendations are going to drive attention to that product. In a small market, my voice may actually have an impact, may do some good, and I think that when I can’t point to anywhere you can get this game, it’s a little bit rude to point out that the game is good. At that point I’m asking you to chase it up on a second-hand market, which, I mean, okay? Maybe?

Ostensibly, Game Pile articles are about showing that I’ve played the game I have. Sometimes that means talking about a big idea the game introduces like talking about Hyperintertextuality through the avenue of Hyrule Warriors. When I’m talking about indie games, distributable digitally, I often prefer to use the platform to just straight-up promote them: Hey, check out this game, I think it’s good, and whatever conversation it enables, I’d like to keep driving.

And yeah, sometimes I just dump on a trainwreck, but you know, surprisingly rarely.

Point is, Usurper is normally the kind of game I’d talk about as a way to drive attention to it, in no small part because I like it, but the fact is, the game is not available for purchase anywhere I can find now the kickstarter is over. And so, all I’m left with, all that remains once I know I can’t offer that goodwill, is… well…

Just little details that hover in my attention as I leaf through the game. It’s a nice little game, I like it plenty, but it hovers in this strangely liminal space where its flaws jar with me. Why is it this way? Why must it be this way?

Why doesn’t the company that makes this game have a website?