Once again, I’m going to talk about a Button Shy game, which I’m beginning to feel I need to construct some kind of template for. Let’s see about hitting the notes! Button Shy make wallet games (roughly 20 cards or fewer) in nice aesthetically pleasant wallets, focus on non-dexterity games from a variety of designers, and it’s smart, funny, clever, designed for fast iterations on play, rewards replay, and is absolutely perfect to keep in your everyday bag. The base floor on these games is quite high, and any criticisms I make of this thing is also made in the context of the game you get under the hood as already being really good and definitely worth having, especially at the very modest rates Button Shy charge. 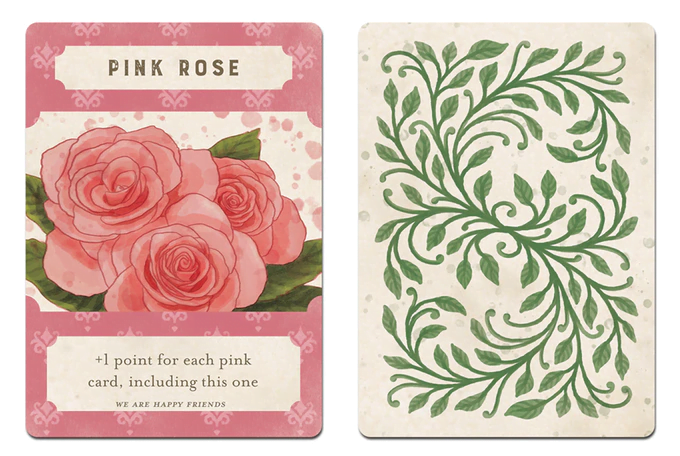 A Tussie Mussie, also known as a Nosegay, is a term for flower arranging, and apparently is largely only used these days in the bloated force that is the bridal industry. Still, originally, the delicate art of flower arrangement and sharing was meant to be a kind of secret language, where you would deliver your tussie mussie to a friend, and they could decipher the message later. Tussie mussies were a way, at the time, to murmur in the chastest way, I wanna do a smooch on you, and probably, spend money doing it, showing that once again, capitalism infests every aspects of our lives.

Anyway, Tussie Mussie the card game is a former GenCan’t game that Button Shy gussied up, by one Elizabeth Hargrave, the designer you may recognise as being on the cover of Wingspan, a game so good and so hot in its distribution last year that it provoked both conspiracy theories and actual political stances. And you know what? I think, based only on Tussie Mussie, Ms Hargrave sure knows her stuff.

You know, in a long shot way, there’s a non-zero chance I’m related to her, but I don’t think so. Disclosure, I guess?

Okay, so Tussie Mussie is a drafting game for 1-4 players, with a really nice cut-and-choose method. You draw two cards, pick one of them to show another player, and that player then decides whether to take the card they can’t see, or take the card they can see. They add it to their bouquet, and you get the other. Then they do the same thing, and so on, until you have four cards in front of you. Scores are then tallied, and you find out who did the best job.

This game is tight, giving you a small number of choices based on a tiny amount of information with a remarkably tight score, and you’re every time given the opportunity to fail at something. In a game of Tussie Mussie, you’re going to make at most, four decisions, and those four decisions are made with partial information. The result is a game where every choice feels like it matters, but because there aren’t forty pieces to remember, and only eighteen, you can reasonably make guesses about what your opponent is going to offer you versus what they’re going to try and keep from you. 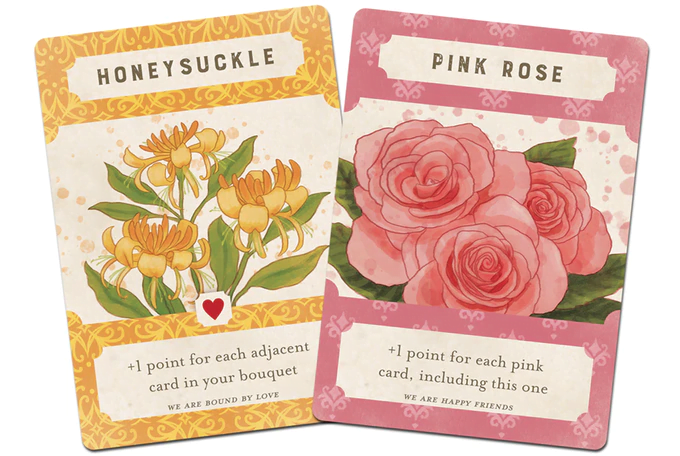 Now, I obviously was going to struggle with games in Smooch Month – it’s always hard. It’s always a struggle. The struggle is because ultimately, while there are games that do things about and with ‘smooch themes’ – themes of romance and relationships – most cultural visions of romance aren’t things we systemitise well. There are whole genres of games about romance that tend to be extremely weak as games, or whose fundamental assumptions about romance bother me in a way that doesn’t seem fun to dismantle.

This is where Tussie Mussie draws a point of contention from me, not because of what it’s doing, or what it unconsciously wants to do. It’s because this game is ostensibly about the mechanics of romantic communication between two people, and it runs into a strange theming problem because it’s possible for one player to win.

In this game, while you and another player are literally exchanging flowers, and building up to communicate a message when you’re done, despite it being about the idea of the tussie mussie and deliberately invoking the narrative components of that message, this game is not about the narrative of the players composing those messages for one another. In this game, despite its framing, it is possible to win without a message to compose, it’s possible to make a message of love, and its value and impact has nothing to do with the message your communicating.

The game itself is tight and great, but when you think about how these messages are communicated, and how unrelated they are to one another, you’re left with the realisation that no, you are not composing these messages, you are not playing Victorians making and trading Tussie Mussies, messages of love and friendship; you’re playing a florist, making Tussie Mussies for other people, being graded on how excellent your versions of those things are.

Tussie Mussie is a great little game. I recommend it. You can buy it right now, over on Button Shy’s website. Despite these virtues, though, it’s a bummer to think about how it could have been framed, and those moments when it quietly breaks into just being a pedestrian abstract drafter.