In October 2015, a new Transformers Videogame hit the shelves and it read like the kind of thing a fan would have made up – a full-scale brawler game, modelled on the classic G1 aesthetic, rendered in tight cell-shaded styles and delivered to us courtesy of the minds behind such classics as Vanquish and Bayonetta: Platinum Games. It had a frightfully short hype cycle, too – it was announced in June 2015, and launched less than three full months later.

So what came of this? Did the game actually deliver on its incredibly strange, moment-in-time development? Was it a cheap cash-in on a license that was in the news? Was this just another attempt to mine our nostalgia?

First things first, Transformers: Devastation picks its aesthetic pretty much perfectly. It’s bold colours and blue skies, it’s heavy metal and flaring, flashing yellows and purples. Of course, if you went out of your way to make a G1 Transformers game, that’s almost an obvious thing, but the game follows through on this aesthetic to the floor.

The city you run around in is mostly made up of regular, brightly coloured panels, with big red ramps on people’s roofs, reasonably similar buildings that only break up a little. This sort of level design would be seen as laziness in a game more focused on interacting with the city, but uh, see the ramps on people’s roofs.

There’s a surprising number of construction sites in this city, a number of very familiar, regular road – and quite a few literal, actual sandpits too. If you’re finding this feeling the way I do, maybe it’s because you too, at some point, sat in the sand, and played with your transformers, building them cities out of cardboard boxes and pens to drive around in. 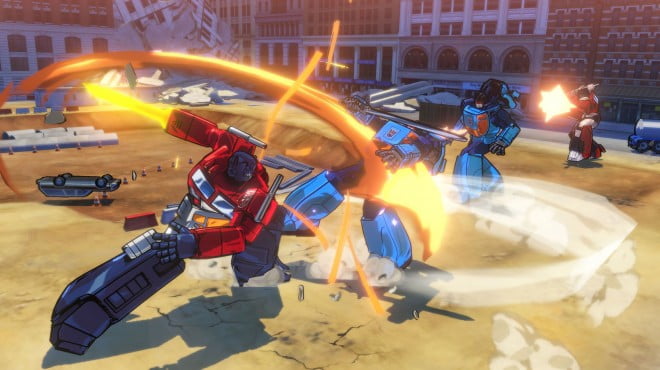 One of my other favourite things about this nostalgic charm is that the game’s city is full of cars – cars that aren’t properly in scale with the Transformers, heh – but also, you see inside these damaged, destroyed buildings.

They’re totally empty. Not even office equipment or carpet or building structures. This game is full of things that signal even though there is danger, people are okay. This is not a Transformers game with a gory human body count. This is not a game where Jazz gets torn in half. This is not a game based on the new schema of the world where Transformers are loud, confusing, carnage-creating piles of liquid-metal junk. This game is brightly coloured goofiness, with Transformers with teeth and snivelling Starscream and all the classic character dynamics you remember from the original series and then, crucially, classic-feeling dynamics that you may not ever remember from a series that didn’t exactly do a good job of conveying them the first time around.

It’s a game of truthiness; it does not represent the original series as it was, it represents it as your adult mind may yet remember it having been. It’s a crucial difference: The game takes the original pieces and positions them in an interesting way. Nothing needs to be changed, or invalidated from your memories, but instead, the story can focus on building in the vast spaces of the Transformers canon that were inexplicably left to lie fallow.

As far as reviews go there’s a lot about this one that can feel a bit unnecessary. If I summarise it as ‘It’s a G1 Transformers game by Platinum’ it’s really not missing any information if you already have the context for those things. For example, the story isn’t breaking new ground or doing a full-scale Voltron: Galaxy Defenders revamp that revitalises the concepts. It isn’t about changing the identity of the work, it’s about executing on the identity that’s already there. 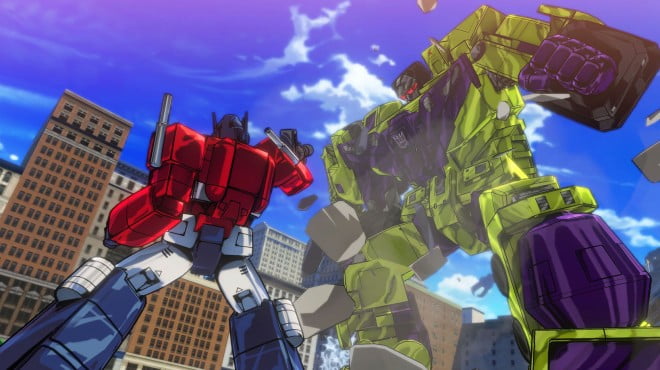 There’s a chance, if you’re new to this scene, that you don’t know what ‘A Platinum Game’ means. It’s okay. It wasn’t something I knew about either, until I threw myself face-first into The Legend of Korra and realised just how badly I was suited to the style of game.

Now in order to make the cool things look good and interesting, though, there need to be a lot of different things you can do. There are combos that care about doing things this way or that way, or at this angle or that angle, and they have different reach, different positions. You look cool, you do cool things, and crucially you can choose to look amazing. 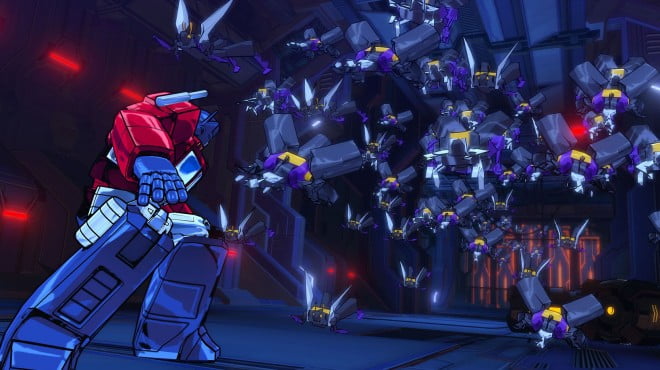 When I sat down to seriously play Transformers Devastation, complete with recording software, keeping track of everything I was doing, headphones, focus, all in for one full hour of play. I played up to the third boss of the game, then set it aside, to see how the game worked, and I realised…

My hands were shaking.

I’d fought one boss, who was really just there to be a tutorial for shield-breaking and charge attacks. Against that boss, I’d had to try over and over and over again even after I’d beaten the enemy down almost to the end of his health, because I kept revving up, charging in, prepared to attack, and, and-

Or did I press the wrong button? Did I press it too early?

The interface kept flashing up two things – things I needed to remember. It showed me the buttons I needed to press. But I was using my controller, the one that’s just a Logitech thing. The buttons aren’t coloured to a standard, they’re not labelled to a standard pattern – I don’t think? – I mean they may be. But even put down to its simplest form, with this chaotic, frantic, extremely tight reponding control scheme, the game asks you two questions, every single time:

I need to underscore this isn’t a complaint. This is something that these games do. They are fluid and they look lovely and if you like what this game does, or think you’d like it, this is definitely an excellent point to jump in – though perhaps Legend of Korra is better, because it’s an even cheaper game than this one. They’re certainly less full-on, less sprawling than something like Bayonetta. And let’s face it, for some of us, Bayonetta is, as a franchise, uh, Very.

Finally there is one nitty-gritty detail about this game that merits some important consideration. Because while Transformers Devastation is a delight in a lot of ways, and it compares admirably to an earlier sorta-indie prize, Legend of Korra, the fact is, Transformers Devastation still commands a 50 dollar price tag, and it doesn’t look like changing any time soon.

This is entirely up to you to decide, of course. I personally don’t expect I’ll get a huge number of hours of fun out of this game – it runs me too ragged, I find myself too agitated playing it at length. But it is still one of the many factors worth bringing to your attention.

Edit: I’ve had it pointed out to me two things: