Jenga’s a pretty solid game. I mean, it’s going on fifty years old, it’s simple, it’s really cheap because every company can make their own version easily. It’s one of those games you’ll see in a dollar store as some company makes their own version of it. Jenga is definitely a success and I think it’s reasonable to say, if you like having a board game collection, it’s a good idea to have a Jenga-like game there.

The other problem is that Jenga is a game where the bulk of the setup and packdown is in many cases longer than the game. Oh, if you’re really good at Jenga, it doesn’t compare, because you can take long stretches of time playing Jenga, but it’s still not a good value proposition. The ideal Jenga play cycle to me would be one where when you’re done playing it, you just sweep the pieces into the box or bag and that’s all you need to do. That means I want a smaller game than Jenga and I want a more convenient game than Jenga.

This week, I got two. 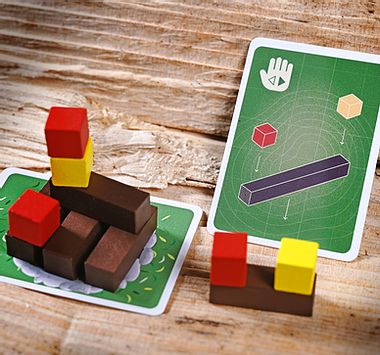 Tinerblox is a mint tin game. It’s about the same size as a deck of cards. It’s a Jenga style game where you need to take small wooden pieces and construct a campfire with them, but you can’t just use your hand – you have to use a pair of tweezers that come with the game. You build what’s on the card, then you have to transfer what you’ve built, in full, onto the existing campfire. That campfire is extremely small, too – its base is smaller than a playing card.

The upshot is that you do have the Jenga-style difficulty of navigating nice wooden blocks.

The theme is gentle as it gets. You’re building a campfire, a little stack of wood and fire, embers and flames.

There are some obvious access problems. First, if you can’t handle fine motor control, it’s going to be harder for you than something like Jenga. That game is more forgiving, it has bigger pieces. Also, Tinderblox is made up of a mix of pieces that are brown logs, yellow cubes, and red cubes, and there’s no signal for the yellow and red cubes aside from their colour. That’s a shame. 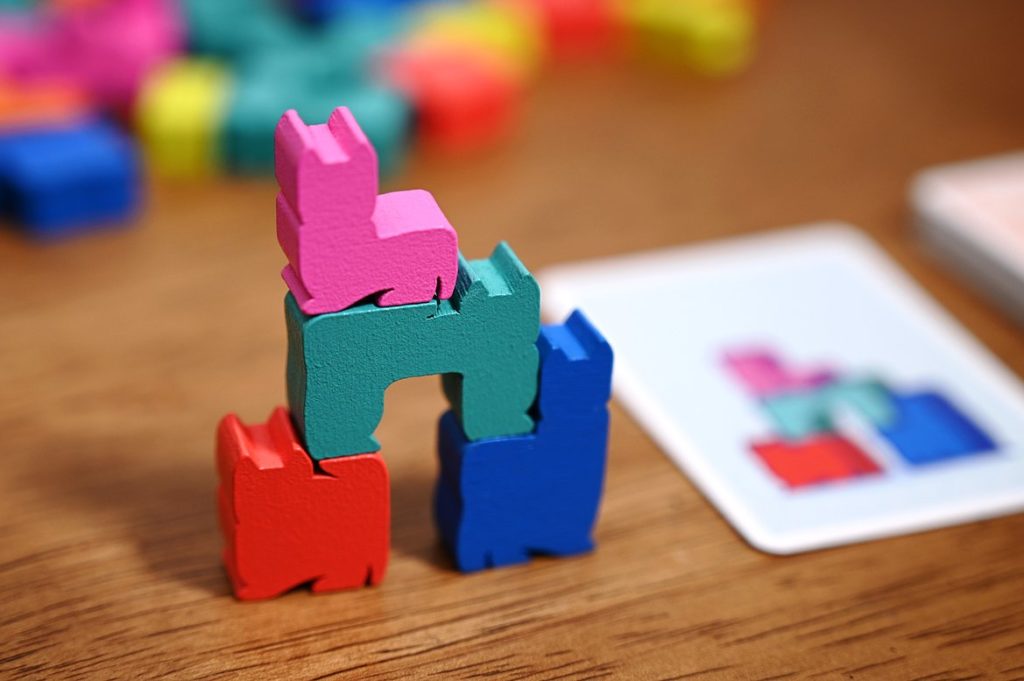 The other game I got this week is Kittin. Where Tinderblox is turn based and based on a player taking their time to get something correct, Kittin is the same kind of manual, physical dexterity game, but it instead is about timing and speed. You play at the same time as each other player, grabbing meeples of cats from the table in front of you, and try to make the arrangement of meeples from the card you draw.

It’s interesting, it’s quick, and it is extremely cute, in its sweet little aesthetic space. It does have rules like how you have to make sure the cats are facing the right way – and you can’t just grab a fistful of cat pieces to work from your smaller pool. It’s almost like an inversion of Jenga, where in Kittin, you do kind of need the space to be small so everyone can access the cards and look at them.

I backed these games on Kickstarter a bit over a year ago, and I’m glad I got them. These two games are going to fit a niche in my collection, and while neither of them is particularly amazing, they have a good price point (they’re 9 and 10 pounds each), and they’re aesthetically very lovely items. I don’t think if I pulled this out of my bag at a party or with some friends, it’d need an elaborate setup/pack down movement.

As with all games, especially board games that occupy material space in your house, it’s important to bear in mind that these are things that you can consider as things you own for a reason. I don’t need all the board games I have – there are some I am going to get rid of, even – because I have other games that do most of the same job, and that are good for different audiences. Kittin and Tinderblox are probably going to live in my collection until I need only one of them any more, and then the other one will move on.