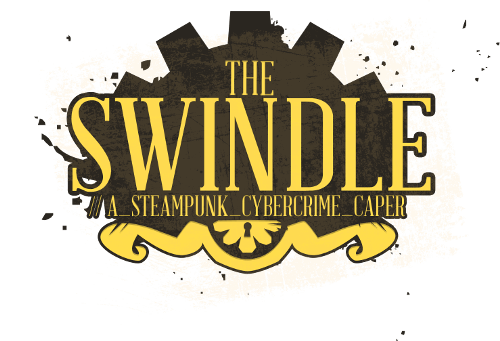 The Swindle is a platform stealth game with procedurally generated levels, no real sense of fairness and an upgrade tree and a progress system that directly work against one another. It is unfair and dreadful and very very hard and I have finished it five times over and as I write this I realised I was trying to find excuses to play more rather than knuckle down and create this review.

Disclosure: I am friends with a developer of The Swindle.

It’s easy to describe games in terms that make fun of its worst elements, like how Half Life 2 and Bioshock 1 are basically the same corridor painted differently. In that context, The Swindle is a stealth platformer with unrefined level design that totally breaks at certain points, and where late-game levels can be totally ruined by the problems that bothered you in the first level.

It’s also really good? I mean, I really liked it. Wait, no, fifty hours in I have to admit I love it. There isn’t really a conflict between those points, though and not because I’m a big fan of very hard games. It’s a punishing fail-hard game design that ramps tension as you play it that isn’t based on speed or time but rather on a war inside yourself. When you have half the money in a level in your pockets, or when you look at the structure of a level and consider just maybe you can’t handle this one, the idea of leaving with nothing is frustrating…

We’re going to do something a little differently with The Swindle, because as I wrote this review, a large portion of it bloated out and became what amounts to just me foaming about how much I liked this game. I’ll probably follow this up with a Deeper In The Pile just babbling about fun bits. So let’s be quick and talk about stuff in The Swindle I don’t like.

Obviously any small game is going to have a sort of tackiness about what can and can’t be tested. The Swindle’s structure is based on learning its ways and the game doesn’t really teach you how to do that well, meaning you’ll probably have a bunch of losses before you ever hit the grain that lets you win.

First up the control scheme for the PC, by default, is awful. I mapped it to my numpad, though, and found that the game still treated the numpad keys like they were directional keys.

Jumping is a little sticky, too; hopping up a single level of height can be unreliable and you’ll wind up instead flinging yourself at the ceiling above it like a giant ball of tar. On the other hand that same mechanism is what lets you climb up the higher spots the game expects you to meet without special advanced jumping, which can create this annoying tension between what you’re pretty sure you can do and fumbling to dart into a doorway when you’re trying to sneak up and clobber someone.

Your default thief, the one you start with, seems to always be the same? And having taken the game a few times through from that single, sole thief, I’ve been a tiny bit annoyed that I’m always playing that whiskery dude when I know getting him killed could give me access to some interesting or cute character alternatives.

Also, that difficult curve, yikes. If you don’t play The Swindle right, you are going to fail, and fail again, and that failure will create a downward spiral that ruins the game for you. Early game is a little repetitive and the very end game isn’t as fun as that period before the end of the game when you’re racking up a really big pile of money for no particular reason.

The Machine For Making Stories

It’s like Dark Souls because The Swindle has a deliberate, long, slow pace which it hides artfully, constantly tempting you to try and rush. Rushing in this game, trying for more than you can handle? That’s the defining hubris of the game. For the most part games are systems that want to oppose you, and The Swindle is an artfully constructed opposition, in that it tells you to walk, then tempts you to sprint.

In good stealth games, being caught is not necessarily a failure state. In some games it’s simply an end; you now have to deal with being killed, then the slow reset of the game. In some you’re hypothetically there to recover, find somewhere to run and hide under a box while you wait for the alarms to diminish. Heck, some games treat it as just your hit points.

In The Swindle, getting caught is a gameplay shift. It transforms the game from a sneaky puzzle game where enemies present dangerous, threatening visual range to suddenly be kinda lame and unimpressive nuisances while you’re under a tiny timer, trying to grab whatever you can and get the hell out.

The nature of The Swindle is one where your thief, the individual you’re playing, builds up an experience boost that gives you more loot at the end of the level based on how many successful heists you’ve pulled. If you get this multiplier even up to 1.6 or 1.8 you will be raking in startlingly large amounts of money from the surfaces of levels. If you can really push it (I’ve had it at 4.2), you can generate millions and buy all the upgrades in one huge burst. This means your most valuable asset isn’t money and it isn’t the upgrades, it’s your thief. That multiplier is super important.

It’s created for me this situation where my master thief, with a multiplier of 2-2.4 walks into the Casino district, looks around, narrows his eyes at the locations of the computers and the security stations, the challenges involved in picking up anything even vaguely dangerous…

…then shrug and go home, possibly after filching a tip jar on the way out.

I think the final word I have to give on The Swindle here, and now, is that I recently replayed the game all over again just to make sure that the loading screen showed ‘new game’ instead of ‘continue game.’ I don’t need a lot of excuse to play The Swindle. I like this game a lot.

You can get it on Steam.