Oh hey, look at this! You’ve noticed the pictures to start with, because humans are visual learners, and you’ve probably heard this name before, and it doesn’t have a number after it so that suggests it’s either a 2020 reboot (and do you see me doing that?) or a super old DOS game (and hey, guess what). You may have put it all together and thought: Hey, Talen’s about to talk about an old DOS game, that started a famous franchise, and we’re going to get all sorts of talk about how videogames back in the day were so good and the pixel is the natural storage unit of fun, because he’s old and that means he’s going to speak to the value of retro games right?

I wanted to do that, because I have fond memories of, when I was a child, playing the demo of this game, a 1993 DOS strategy game by Blue Byte entertainment, a game company that has since been acquired by and made part of the Ubisoft coalition. It was for the time, technically impressive, and commerically, wildly successful.

And going back to play it again, this game is wildly unapproachable.

I do think that if you make games – even physical games like tabletop games or ball games or whatnot – you absolutely should learn some lessons from this game. Particularly because this game has almost no text in its interface. Everything is an icon or an image, and that’s doable but… 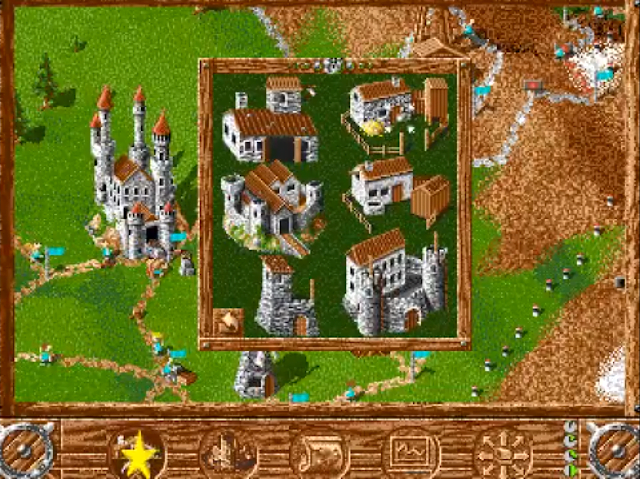 Because I’ve finished the tutorials for this game and I don’t know all the answers to that.

I can tell you that this depicts a tool shop, a pig farm, a wheat farm, a storehouse, a garrison, and a watch tower, but I can’t tell you what costs more. I can’t tell you what you need to make one or the other. I can’t tell you how long they take to make, though it’s not fast. The whole of this game runs on a deliberate, plodding pace, which I don’t think is a bad idea, but that pace is wedded to utter obscurity.

Don’t worry, though, because you can always check the glossary in the manual, which will tell you what the buildings are called, and tells you in text how some of them relate. What they cost to make? Oh, no, you don’t need to know that.

Oh and do you want to know how the components of the game’s economy fit together? Well that’s easy, just check out this chart you can access in the game: 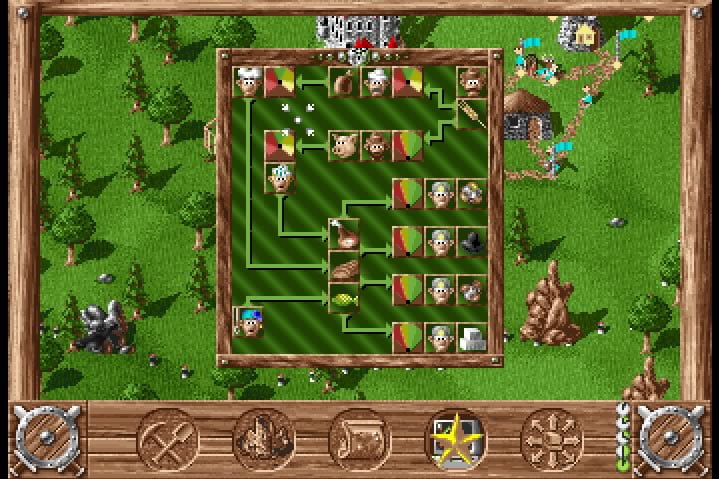 The game dumps you into a first map with literally no interface guidance at all; the first way the game starts to play is not the tutorial, but rather just a base skirmish scenario. You have to click to access the tutorial, and then at the first of the tutorial is

You start with the resources to build them. Nobody is challenging you. What this means is that beating this first mission is a simple matter of laying down three plots, connecting them to your castle, then waiting for seven minutes.

You’ll know if you succeeded if, after those buildings are built, a knight moves into each one, and then a minute later, you get a victory screen and it asks you if you want to keep playing.

What’s more, you can fail the tutorial, by spending all your resources building buildings other than the three you can build.It’s possible to just run out of currency for the game in the start of the game, and the game even has an emergency fund it can give you if you do that – 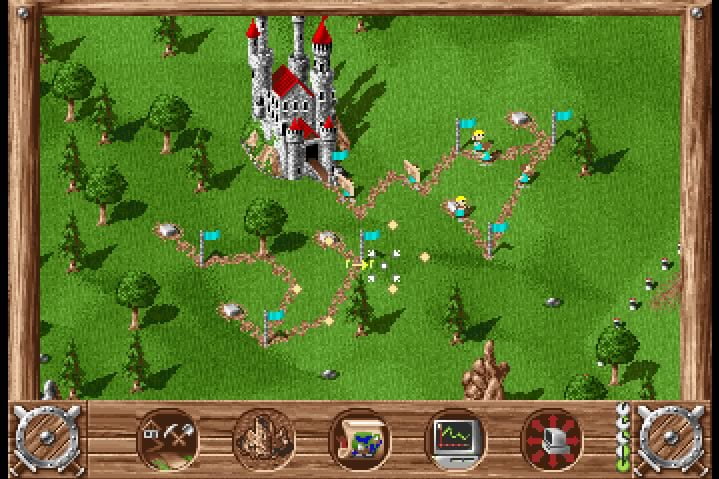 Well okay, then that’s the disappointing gameplay aside, are we now going to get treated to a lecture about how this 1993 game was Colonialism, so if you did have fun with it, you were doing something wrong because the moralising scold of Bad Videogames is here to hurt your feelings? Well no, and don’t be silly.

But also no in this case because one of the weirdest things about Settlers is that as part of its game conceits and its limitd systems you kind of aren’t doing any ‘settling’ in the first place. This is a game about constructing small economies in land that is either completely unoccupied, or occupied by another asshole noble’s people. There doesn’t seem to be a strong hierarchal noble structure, just one person in charge and a big pile of knights and nerds that do what they tell them to.

Oh, it’s kyriarchal, but it’s also just not very ‘settlery’ because there’s no sense that you’re arriving anywhere. There’s no tech tree of working your way up from the most primitive technology to the most successful technology. You just turn up and plonk down what is clearly a castle that’s a project of years on your strange, wrapping maps that can’t help but make me feel like you’re working with a really tiny planet, or that the nature of roads in this world are throwing you through the feywild. 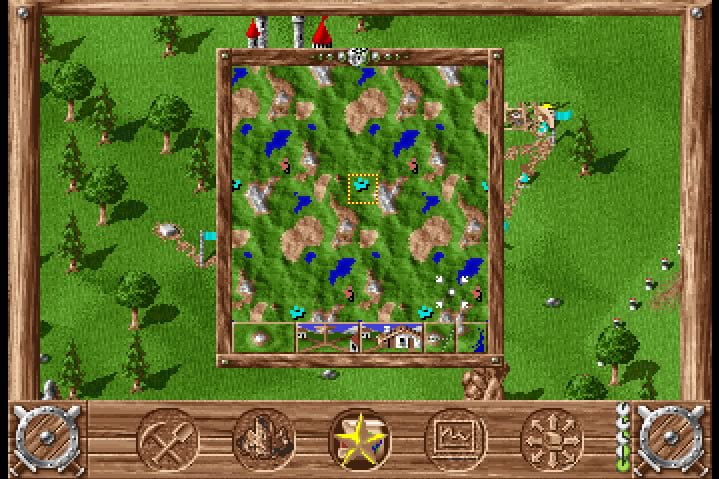 Know what’s weird about the way this game works? Gold is largely only useful because it makes knights happy. As far as I can tell, they don’t spend it – but if they’re defending a really big pile of gold, they’re better at fighting. You need iron for tools and you need coal to work iron and you need stone to build the buildings where you do both of those things, but as far as I’ve been able to tell, gold is just good for improving the morale of your knights when they want to get into a fight with the neighbours.

It’s still certainly not anticolonialist, but I think just by dint of an accident of how this game thinks of ‘settling’ a new area, it’s kind of leapfrogged through colonialism straight into a sort of perfected space exploration where the worlds we encounter start with a pre-built stronghold and a desire to play at being medieval until an arbitary judge high in the sky determines you’re done and can go home.

Which in a way, is true. 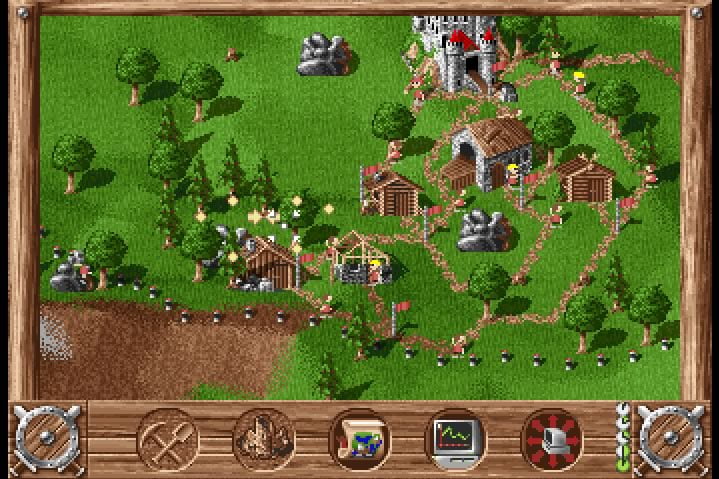 None of this is really surprising. When Settlers was made, Blue Byte were a small, German game development company making games for a European audience. Making your game in one language was wasting good money you could be making in the growing Amiga software space. That suggests that it was easier to make your game so it needed as little translation as possible, and that meant maybe it was just better to avoid showing text in the game if you could help it. The interface is something that feels almost amazingly Eurogame, too, where you’re fighting enemies by pushing your territory up against one another, where you’re memorising the values of things moving against things and you’re just assumed you’ll look up what you need to do.

There’s a lot of reason to want to make the manual a part of playing the game, too! It’s got the copy protection in it, and this is the kind of period where your options for fighting piracy are pretty limited.

The game was good, and successful, and as a technical achievement, truly groundbreaking; part of what goes into the technical side of this game and makes it interesting to play with is that when you’ve got your little village economy going, the game is regularly solving Travelling Salesman problems and managing up to thousands of units all operating around in their own space. And it’s even fun to go and play, because once I played through the manual tutorials and hazarded my way through the whole experience, I had kind of an economy based minecraft style game where my little critters moved things from A to B To C.

At the same time though, good grief you can learn about what your ‘intuitive’ interface looks like when you’re not used to it.