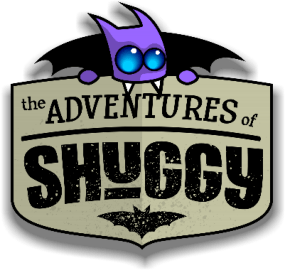 Let’s set the right tone for this review: Pthhhbbbbbbbbbttttt.

In the Adventures of Shuggy, you play a purple-headed big-eyed cutesy thing that’s called a vampire, who moves through a variety of things called rooms using a variety of mechanics without thematic rhyme or reason connecting them. The vampire, whose name is Shuggy, has inherited this castle, what with vampires being so prone to inheriting things, thanks to immortality and the blood of the damned. Don’t be silly, though – Shuggy isn’t the vampire kind of vampire, with powers, who can fly, and control men’s minds and command the will of the damned and not enter a building without permission. Shuggy is the kind of vampire defined by purpleness and big eyes and exploding into piles of green goo.

The play experience is divided up into non-linear puzzles, each one no larger than a room, each one with a reasonably simple, straightforward solution, where the most challenging puzzles in the game are best compared to mazes, where you have to walk forwards a certain distance, then walk back again. All the most rudimentary parts of platform puzzling are present – indeed, if you’ve seen a whole game based around a mechanic, chances are, The Adventures of Shuggy crams it in. I can’t say I saw Portal guns, but don’t worry, we’ll be getting to that game soon enough.

I made fun of Darksiders for its attempt to cram in every popular game mechanic of the past ten years, and I don’t see why I shouldn’t be mocking The Adventures of Shuggy for that reason. Strangely, though, the effect isn’t a game that’s stuffed – it’s a game that feels spread too thin.

The number of mechanics The Adventures of Shuggy includes is probably too many. As if to compensate, the game is made up of over one hundred levels. You die a lot, too, and the game has no real way to help you out with making mistakes beyond letting you reattempt every level an infinite number of times. None of the mechanics are well-explored. The game seems almost afraid to focus on an idea for long enough to do anything with it, instead rushing off to introduce another mechanic, which it will drop quite handily.

I think the most damning thing I can tell you about The Adventures of Shuggy is that I could sit here for about half an hour and list only bad, or annoying things in this game, and not run out. If I tried to tell you good things, I’d run out in a few seconds. The maddening thing about this summary, however, is that in both cases, I can’t even begin to call the game bad.

It’s not bad. It’s just eh. It’s just there. Indie titles always have this problem, though, where one of the first things cut in the budget is forward planning. The Adventures of Shuggy is a game that fails at being remarkable – it just is. It sits there on the edge of the desk like a forgotten biscuit.

Don’t take any of this criticism as a mark that Adventures of Shuggy isn’t worth buying, for some people. As with almost all games that aren’t actively bad, The Adventures of Shuggy is an adequate game. The buttons, when pushed, react, the control scheme is functional, and when you finish a level the game advances with a nice little sound. You can play through the whole game and possibly even enjoy yourself along the way.

Still, this is the most bland and boring videogame about playing a vampire exploring a haunted house that I have ever seen.

The Adventures of Shuggy is available from Good Old Games, and probably other places too.

All images were obtained from Smudged Cat Games