The rain rattles down against endless shimmering towers of silver and glass, black sludgy water, stinging on the way down, even the treatments making it ‘safe’ leaving it bitter, acrid, and faintly radioactive. No-one who knows better would be about in weather like this.

But nobody knows better.

The people mill around you, chips on their necks keeping them docile. What are they seeing? Do they even see the rain and the lines it leaves on the glass around them? Probably not. Every city runs its own sim, its own explanation for the world around them as the citizens move about, processing information and doing jobs and not noticing the world as it really is.

Imagine keeping a labor force like this in pods. 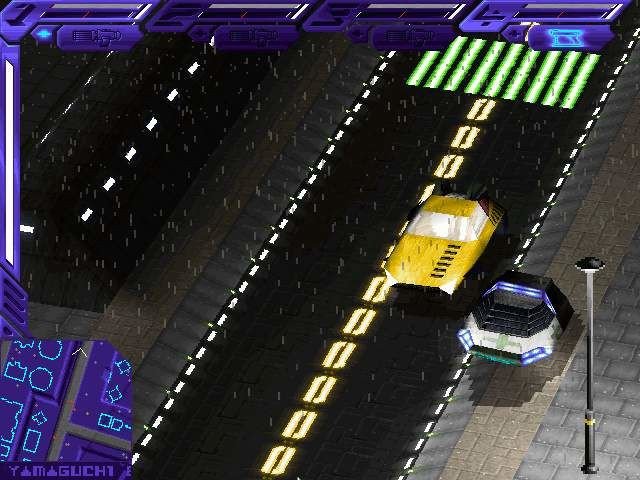 A world sized prison for humans, plugged into a vast wireless network of perception manipulators? Unnecessary. After all, if there’s ever a serious problem, they solve it with agents. Heavy, boot-and-coat wearing walking battle platforms, with no personality and big scary fuckin’ guns.

Agents from one corp, agents from another corp, they clash, and everyone else is left dead. More now we got the cult weirdoes, and the gangers who fell out of the network trying to stage an uprising.

This is the world now.

You fell out of the system, after that virus hit. And you get to see the world, as it is – as it tears itself apart.

This is Syndicate Wars. 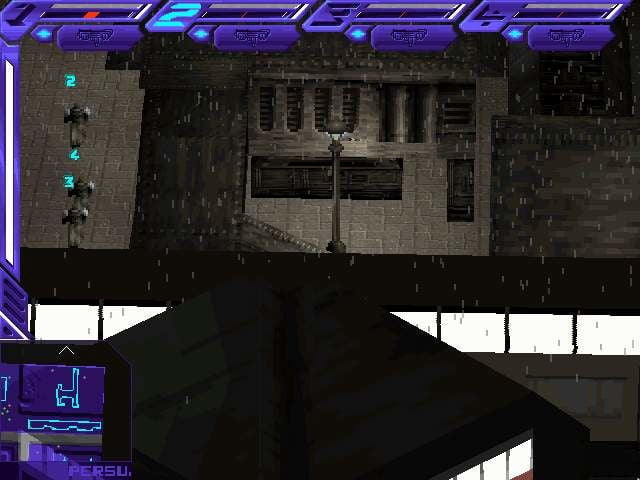 Syndicate Wars is a tactical real-time strategy game from Bullfrog Software released in 1996, as a sequel to Syndicate. In this world, the world is owned by immense corporations which deploy specialised cyborg super-agents to do things that they want done in a conventionally nefarious means. It’s just a direct extrapolation of the idea that the corporation is the state, then the corporation will just take to military strikes against other corporations.

In Syndicate Wars you are playing the same kind of executive from Syndicate, who has advanced up the ladder to middle management of evil, coordinating your agents to do whatever it was you’ve been sent a direct email to deal with. These missions have degrees of success and you have time and space to pick up weapons and acquire new agents and suffer losses and all that stuff. It’s strange to try and describe the play pattern of a game like Syndicate because the terms that describe it – ‘real time’ ‘tactics’ ‘strategy game’ – kind of covers it, but it feels so inadequate.

In Syndicate Wars, you’re sending four independently-positionable agents, armed with tools and weapons you give them at the start of the game. You get to fine tune the agents, with equipments and implants that you have to research. You research them by spending money, money you earn for completing missions and secondary objectives. Rushing the game in a speedrun is about getting the leanest, meanest team through without ever making a mistake, but you can instead play a big sprawling game where you scour maps, sneak carefully past police, never cause problems (that you don’t have to), and collect every civilian on the map like a sort of cyborg sheepdog.

And it’s like, surprisingly flexible? You can get a sniper rifle and actually do things like snipe across a city with some other agent spotting for you or luring targets into the line of sight. You can pile your agents into cars and crash through barricades and walk out of the exploding car with miniguns (yes) blazing. There’s even nonviolent options where you pick specific targets carefully, sneak up to them and capture them rather than kill them. But wait, not only that, but the enemies know you can do that so there are some missions where you’re assigned to capture someone, and they will kill themselves if they realise you’re close. 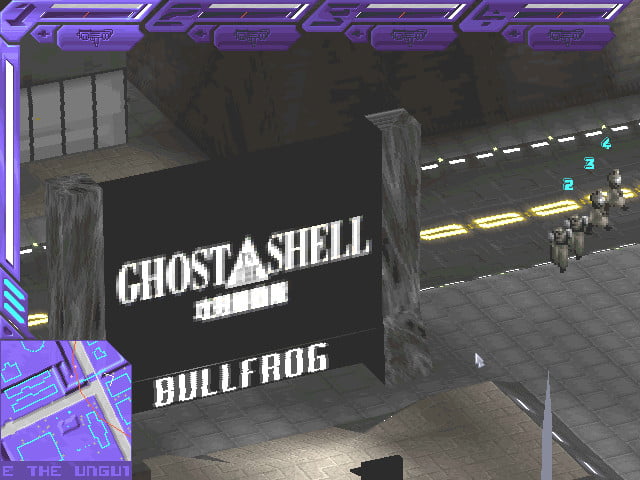 You might think, perhaps with some good reason that I’m only ever going to bring up Bullfrog games to dumpster on the ones that aren’t Syndicate and Populous, as a sort of ongoing crusade against Peter Molyneux as a Big Mean Boy Who Hates Fun. Especially if you’re familiar with the discourse of PC games from the late 1990s —

And why would you be

— where it was sort of determined that Syndicate Wars was the disappointing sequel to the perfect jewel that is Syndicate. I had that opinion going in, in fact! After all, Syndicate kept me up late shooting and scavenging and sneaking on my holidays as a child visiting my cousin, but Syndicate Wars arrived in my hands when I was a teenager, and failed to interest me despite my eventually having spent twenty of my own dollars on it.

Man, now I look at that lineup, that was a good year for me and cyberpunk media. 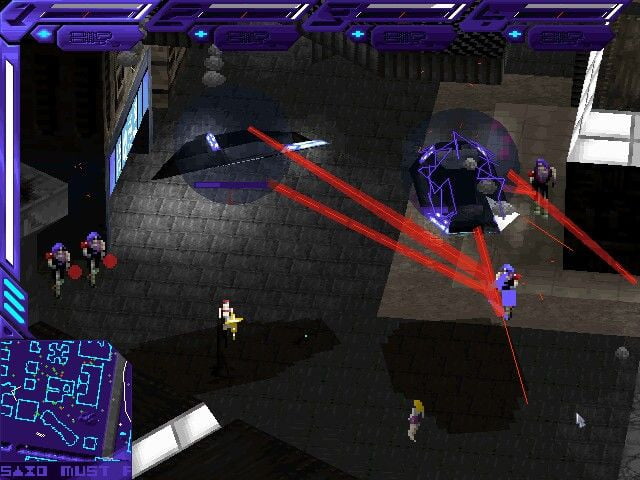 Anyway, as a kid playing Syndicate Wars, I found it simultaneously too hard and too easy. Levels seemed to be solvable by just throwing really powerful units at things, without much in the way of strategy or timing, and that meant I played like that. Instead of a squad-based strategy tactics game with miniguns, I grouped up my four agents as a gun and wandered off to go deal with it. Levels are actually thoughtfully designed so that you can club most of them like this, but get better rewards if you slow down a little and approach it carefully, and as a kid, I landed in that sweet spot where I would do enough of neither.

The interface is also just really clever in these weird little ways. You can give your agents drugs, which change their behaviour. The drugs can make them more trigger happy and prone to retaliate or pre-empt fights, or they can make them cautious and able to take more damage, but maybe even inclined to ignore damage they’re taking. But what’s more, you don’t just get to say ‘do the drugs! Now!’ like it’s a button! You set a level of drugs for the bloodstream of your agents, and then their metabolism has to ‘ramp up’ to that.

This creates this wonderful meaty feeling to the agents – they’re this synthesis of extremely strong technology but there’s a lot of the limits and behaviour of it that operate like they aren’t the perfect machines you treat them as being. They are ultimately, made of meat, and I like the way the game makes controlling for that part of the play experience. 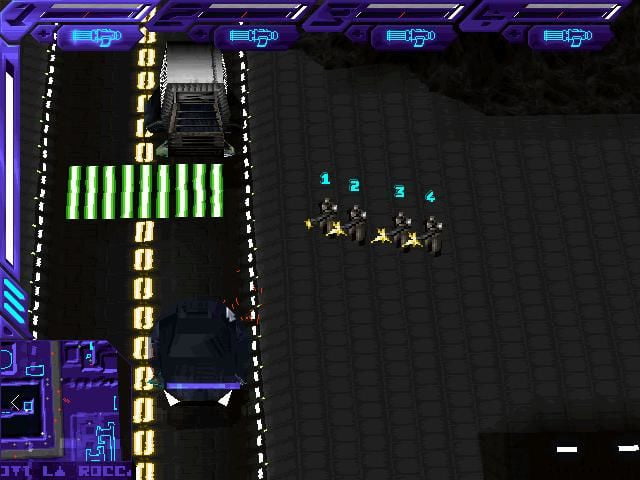 What surprised me going back to it is just how much personality Syndicate Wars has. The manual lists a set of enemy factions in the other corporations, their specific personalities and problem-solving approach to dealing with you.

The enemy factions are undeniably a little ’90s vision of corporate culture’ – with [Asia] becoming a lumped together mix of Triad, Tongs, and Yakuza, or the group sigh Executive Jihad. There’s also the horrifying corporate entity that is ‘what if the CIA became a private business,’ because yikes. You don’t really get to deal with these corporations much in the game itself – they’re mostly just represented by standard agents, but it’s still interesting that there was effort into the lore.

There’s also a mission where you have to go get an old character from the first game, who’s been in cold storage, because when the internet gets infected with an agent-busting virus, he’s of old enough tech that he isn’t affected by it. As far as excuses for a downpowered ‘do this level the hard way’ narratives go, that both serves as a throwback to the previous game and it justifies itself in the lore in a way that’s a lot more interesting than the classic ‘you got jumped and stripped of your stuff.’ 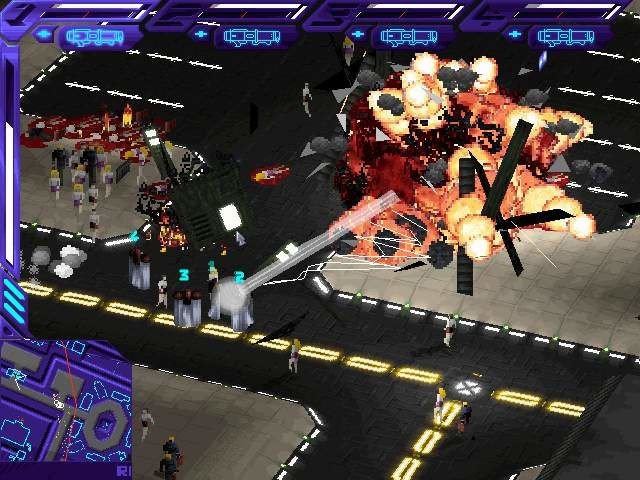 Of course, it isn’t a great game, not really. I wouldn’t recommend you go back to it with a modern eye. The interface has all the trappings of a game you’d see made today, but made without access to a scroll wheel or a familiarity with mouse movement of camera. There’s a lot of stuff that wants to be a much more fluid experience but just because they didn’t know how to do that, back then, it all comes together in a very cumbersome way.

There’s also some stuff where the fiction of the universe just breaks in a funny way. Like, in 2151, one of your earliest moves is that you have to research how to make Uzis, which implies that that tech is somehow elusive, or maybe that you’ve got to research an extralegal way to manufacture them while violating some patent or other.

There’s also a lot of the game that feels vaguely like there’s a third side you’re missing. It’s less Syndicate Wars and more The Internal Beefs of a Syndicate while it fights a Cult. And that Cult doesn’t even set itself up as a replacement power – you find that it’s going to betray you to die on earth. This is because originally, the game was designed – and I say ‘designed’ in that there were talks and plans and paper sketches, and actual levels in the actual game you can use commands to access from the DOS Prompt – to have a third faction, the unshackled who broke free from the brain-control chips in the setting.

It’s okay, that’s how games go. They aren’t made, they escape. Ask any developer what they’d change if they could, and they always have answers. 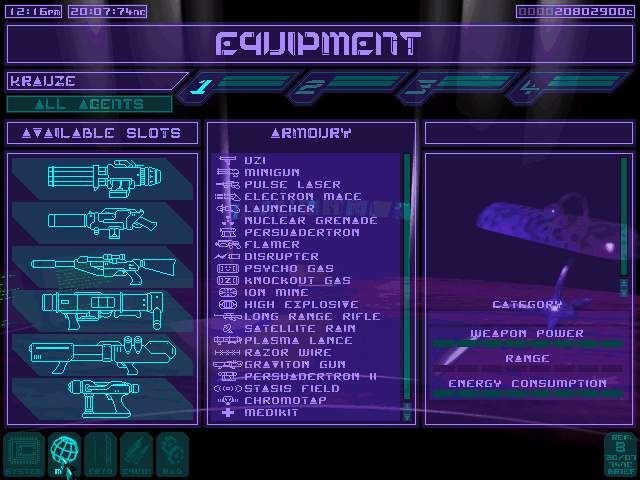 This is the end of the Syndicate saga for me. I’ve tried Satellite Reign, the spiritual successor, and it’s more difficult for me to get my head around, and doesn’t seem to have this game’s janky arcadey quality where you can brute-force levels with the brain of a teenager.

The thing I wanted to try was Syndicate (2012), which … I’d just like to complain momentarily about how games reusing names like that, then requiring a time stamp to show where they came from creates this really embarrasingly dated effect. Anyway, Syndicate (2012) is refused classification in Australia, meaning that, as someone who does not export or import physical copies of games, I cannot buy the game legally, or conveniently, at all. I can’t pirate it easily either – because what I want to try with that game is the interesting sounding squad-based FPS cooperative play.

Which relies on the servers owned by EA, which have been shut down.

That’s that. That’s all there is to it.

I don’t get to play this game, because of regional opinions about this product, enforced over a supposedly free internet in the name of corporate capital. Because it seems, in the end, nothing about Syndicate can avoid being cyberpunk as fuck.