I’ve talked about lawnmower language when it comes to talking about games. It’s the idea that sometimes we talk about games as if we’re talking about products for a task and sometimes we talk about them like they’re art for consideration. Normally, I don’t do that here – even the games I really love, I tend to love with caveats, big asterisks that tell you hey, I may like this game, but don’t go thinking you should. Sometimes, some game reviews are basically advertisements for the game.

In this case, I don’t mind advertising this game because it’s very easy for me to tell you how much you should want it. Hell.

Just look at this. 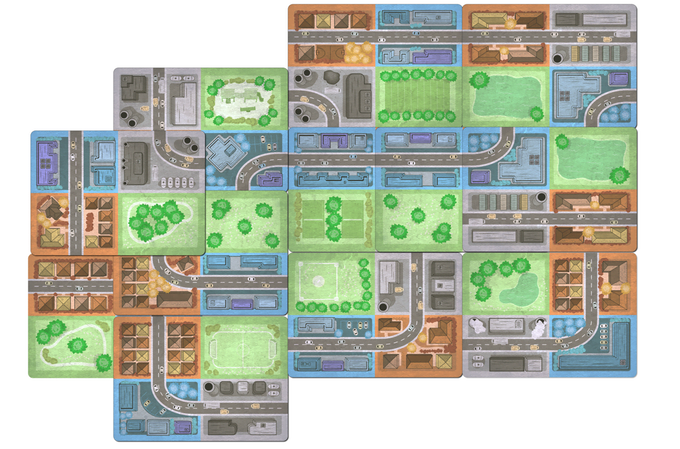 Some of you are already looking at this play state and reaching for your wallet. Now here’s your buffet of additional points:

The other goals are all determined by three cards at the start of the game, removed from the deck and set aside. They both set the target goal number you need to make – and the rest of the card shows a thing that gives you points, based on how many instances of that effect you put into your city. And these are on the back of all your cards, which means all 18 cards of the game change the rules for play.

This is, though, this is something I love, but I love it because it also means that you don’t play with the next card face-down. Right? Because the back of the card is game information that isn’t relevant to this game. Which means, Tetris-style, you have the card you just drew, but you also have the cards that are going to come next, and that means even when you’re not the player with the cards in hand, you’re still making plans for the next steps.

I love this. I love making maximal use of the text of the card. Making that top card of the deck into an important piece of game information means that you’re minimizing the unused faces of the cards in this tiny tiny game. And I love that! 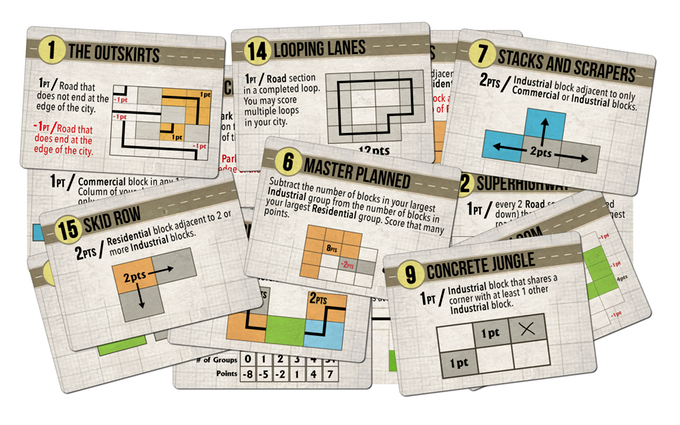 I backed Sprawlopolis on kickstarter a bit over a month ago, and I do heartily recommend backing everything Button Shy does that excites you. They have some stunningly consistant game production.

I love this little game, but I’m also the kind of person who carried around a deck of cards to play solitaire. I always played it in the quiet corners while I waited for other things, and you know, solitaire is a decent game. It’s a fun game!

But it’s also a primitive game. It’s a game we know. And you can’t get people into it. It won’t open any doors, it won’t show anyone the exciting potential of tabletop games. I don’t want to dismiss a love of solitaire, but if you’ve ever wanted something you can just play – just pull it out of your wallet, in the pub or the mall or waiting on someone at an office space and play? If you’re that little bit weird, like me? If you want to play a game that you can carry around conveniently, share easily, and play almost anywhere and actually want to do that?

You can get Sprawlopolis over at Button Shy games and I heartily recommend, if I’ve made my case, that you go check it out. All the graphics from this article have come from their kickstarter, just so you know that.